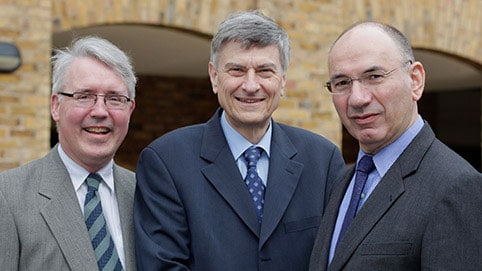 Today, the FTSE 100 closed at 6,949.63 and finally broke through its previous all-time high of 6,930, achieved on the final trading day of 1999. According to three London Business School stock market experts it could hit the 10,000 landmark much faster.

Professors Elroy Dimson and Paul Marsh and Dr Mike Staunton of London Business School find themselves in the odd position of celebrating their pessimism. Most market-watchers expected the FTSE 100 to recover its exuberance far faster.
Now the trio is firing up the forecast model with renewed confidence to predict the timing of the next landmark of 10,000. They say there is a 50/50 chance that it will happen by 2022.

“We went on to say that the market would not get there smoothly,” notes Professor Dimson. “With hindsight, that was something of an understatement. But at the time, we were regarded as raging pessimists, although we were just being realistic.”

As 2013 came and went, the professors have been watching the FTSE 100 closely, interested to know how much more pessimistic they should have been.

Professor Marsh says: “From the end of 1999 to today, investors in the FTSE 100 received a zero capital gain. But their total return has not been zero, thanks to dividends.”

Marsh explains: “While year-to-year stock market performance is driven by capital appreciation, long-run returns are heavily influenced by reinvested dividends. In the UK, in the 115 years since 1900, an index fund with dividends reinvested would have grown to more than 170 times the value it would have attained without dividend reinvestment.”
Staunton points out that the start of the millennium has been disappointing thanks to two savage bear markets, caused by the tech-crash and then the global financial crisis: “The FTSE 100’s return of 3.4% per annum (pa) is just 0.5% above the UK inflation rate and 0.4% above the return on cash (UK treasury bills, or bank or building society deposits). Equities are risky and a 0.4% premium over cash is a meagre reward for risk.”

Historically, UK equities – as measured by the professors’ long-run equity index for the UK (the Dimson-Marsh-Staunton or DMS Index) - have provided a real return (after inflation) since 1900 of 5.3% (pa). This is equivalent to a risk premium over cash (treasury bills) of 4.3% pa.

Using the same technology as in their 2002 forecast – first passage time for a barrier option – the professors have examined the prospects for the FTSE 100, and assessed when it might hit 10,000. Their probabilistic forecast is revealed in Chart 2.

Dimson concludes with a caution: “As we said in 2002, do not expect a smooth ride. And these ‘probabilistic’ forecasts come with the usual health warnings.”