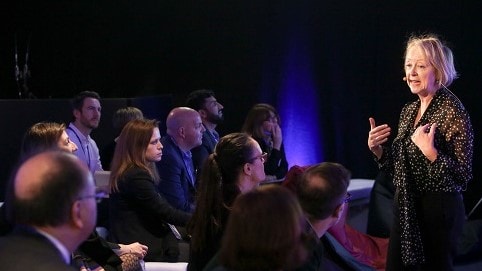 Five members of London Business School (LBS) faculty who teach on Executive Education customised and open programmes have been named among the Thinkers50 for 2019; a further three faculty members were shortlisted for Distinguished Achievement Awards.

The Thinkers50 awards are given out every two years. They recognise the most influential and respected management thinkers in the world. In 2019, more than 5,000 people participated in the evaluation process, submitting nominations for both the ranking and the Distinguished Achievement Awards.

This recognition, enjoyed by so many of LBS’s faculty at the 2019 event, reflects the strength and esteem enjoyed by the School’s academics.

Thinkers50 is a global ranking of top management thinkers and aims to provide access to powerful business and management ideas. Thinkers50 has three core beliefs: that ideas have the power to change the world; that good management is essential to human affairs; and that new thinking can create a better future.

Lynda Gratton, who was ranked 13th among top management thinkers is Professor of Management Practice at LBS, where she directs the programme Human Resource Strategy in Transforming Companies – considered the world’s leading programme on human resources. She teaches an elective on the Future of Work and in 2016 received the School’s annual Excellence in Teaching Award.

Over the last 20 years, Lynda has written extensively about the interface between people and organisations and published nine books, including The 100-Year Life, co-authored with Professor Andrew Scott. She is a Fellow of the World Economic Forum and a Steward of the WEF Council on Gender, Jobs and Community. She served as a judge for the FT Business Book of the Year, chaired the Drucker prize panel and has been on LBS’s governing body.

Herminia Ibarra, ranked 18th, is the Charles Handy Professor of Organisational Behaviour. Prior to joining LBS, she served on INSEAD and Harvard Business School faculties. An authority on leadership and career development, she is a fellow of the British Academy, a member of the World Economic Forum’s Expert Network, a judge for the Financial Times/McKinsey Business Book of the Year Award, one of Apolitica’s 100 most influential people in gender policy, and the 2018 recipient of the Academy of Management’s Scholar-Practitioner Award for her research’s contribution to management practice.

Gary Hamel, ranked 31st, is Visiting Professor of Strategy and Entrepreneurship; he champions the management revolution while advocating innovation as a key driver of wealth creation.

Hamel asserts that organisations must continually reinvent themselves, and not just at times of crisis. His groundbreaking concepts such as ‘strategic intent’, ‘core competence’, ’industry revolution’, and management innovation have changed the language and practice of management in organisations around the globe.

Julian Birkinshaw is Professor of Strategy and Entrepreneurship as well as Deputy Dean for Executive Education. This year ranked in 45th place, he is an expert on innovation, entrepreneurship, and renewal in large corporations, covering issues such as innovation, corporate entrepreneurship, strategic agility and headquarters-subsidiary relationships. He has written 15 books, of which the most recent include Fast/Forward and Becoming a Better Boss.

He is a Fellow of the British Academy, the Academy of Social Sciences and the Academy of International Business. He has been awarded Honorary Doctorate degrees by the Stockholm School of Economics (2009) and Copenhagen Business School (2018).

Michael G. Jacobides is the Sir Donald Gordon professor of Entrepreneurship and Innovation and a Professor of Strategy. Ranked 49th, his research focuses on business ecosystems and digital platforms, collaboration and partnership. He specialises in industry change, corporate turnaround and organisational transformation.

Professor Jacobides is also Academic Advisor to the Boston Consulting Group, Visiting Scholar at the New York Fed, and Visiting Fellow at Cambridge. He studies new business models, value migration and strategy in shifting environments, and looks at how digital ecosystems transform the business context.

He asserts that because of regulatory and technological changes, industry boundaries disappear and firms must compete in increasingly ambiguous environments. Success rests on the ability to broker collaborative relationships, forge an ecosystem vision and understand how to best prepare for each ecosystem role.