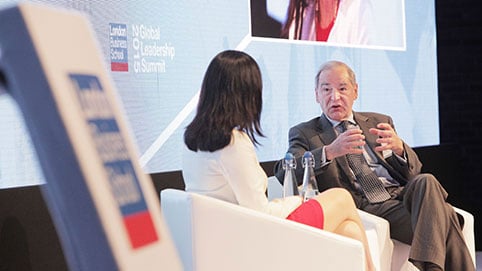 One in three business leaders (38%) think that state collapse or crisis is the biggest risk facing global business, according to results of a poll at London Business School’s 2015 Global Leadership Summit.

More than 500 business executives attended the annual event, delivered in collaboration with Deloitte, the business advisory firm, at The Brewery, London. Interestingly, the audience was almost equally split when asked if Greece is likely to exit the euro (51% said yes, 46% said no), demonstrating the depth of uncertainty within the European economy at the moment.

Linda Yueh, Adjunct Professor of Economics, London Business School, and former Chief Business Correspondent, BBC News, said: “The responses from business executives at this year’s Global Leadership Summit were revealing. If the world had no borders, more than half said that Greece would leave the Eurozone. It implies that Greek institutions and economic conditions haven’t yet converged with the rest of the Eurozone as a political entity. But just under half believed Greece would stay, so Grexit continues to split opinion."

The current geopolitical environment was high on many peoples’ agenda with almost one fifth of respondents saying that it was the greatest challenge facing business leaders today.

Sir Jeremy Greenstock, Chairman, UN Association UK, and one of the keynote speakers at the Summit, said: “The EU began with many compelling reasons for coming together – in the decades since then, as people's local identities have become stronger, those reasons have faded.

“The tribal instincts of people within the EU [to pull away] are stronger than those wishing to stay together. The difference between Germany and Greece is now too big for a single organisation, with one set of rules, to stay together.”

As the School celebrated its 50th anniversary, speakers came together to discuss the theme ‘what if’ covering: economics and society; strategy and innovation; and leadership and management. More than 20 speakers discussed issues from the future of Europe, to the future of work and solving the world’s problems.