Congregation 2014 celebrates the accomplishments of London Business School students and leaders in business. 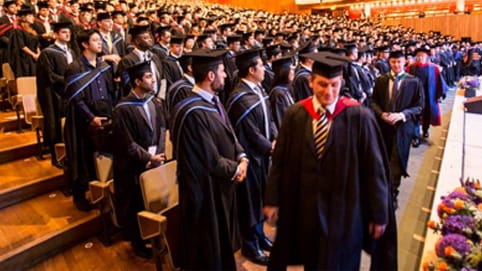 Helena Morrissey CBE, CEO of Newton Investment Management, is one of a trio of individuals whose outstanding contribution to business has been recognised with an honorary fellowship at London Business School. Helena was voted one of the 50 Most Influential People in Finance by Bloomberg Markets magazine in October 2013. In 2010 she was named the Financial News ‘Most Influential Women in European Asset Management’.

In 2010, Helena founded the 30% Club, a cross-business initiative aimed at achieving 30% women on UK corporate boards by 2015 through voluntary, business-led change. She received a CBE in the 2012 Honours list.

Helena joins the ranks of London Business School Fellows alongside Natie Kirsh and Anshu Jain.
Natie is the founder and main benefactor of the Inhlanyelo (seed) Fund which has sponsored micro loans to grass roots entrepreneurs. To date more than 11,000 businesses have been created nationally. He is also founder and benefactor of the Computer Education Trust, which has set up a computer literacy programme providing computers and training to all secondary schools in Swaziland.

As Co-Chief Executive Officer of Deutsche Bank, Anshu Jain and his colleagues are spearheading Strategy 2015+, a comprehensive transformation programme in pursuit of Deutsche Bank’s aspiration to be the leading client centric global universal bank. Anshu advises governments and industry bodies around the world. He led Deutsche Bank’s team advising the UK Treasury on financial stability. The Economic Times of India named him Global Indian of the Year in 2012 and he received a Lifetime Achievement Award from Risk magazine in 2010.

“Those we honour represent excellence in many ways. They have a profound impact in different fields and we salute them at our congregation,” said Sir Andrew Likierman, Dean of London Business School.

Students from the full portfolio of London Business School’s degree programmes graduated at the congregation ceremony, joining the ranks of distinguished alumni from the School.