EUROUT reaches out to allies 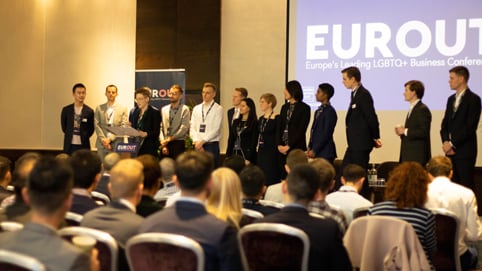 EUROUT, Europe's leading LGBTQ+ (Lesbian, Gay, Bisexual, Transsexual and Questioning plus everyone else) conference, reached out to straight people for the first time this year.

Straight guests have always been valued as important agents of change in business, but this year was the first time the London Business School (LBS) conference has sent out a 'bat signal' for help from heterosexual people, through the Ally initiative. The initiative aims to recruit straight allies to change working cultures.

The challenge is still immense. In the UK, more than a third of LGBT staff (35%) have hidden their sexual orientation at work for fear of discrimination according to the ‘LGBT in Britain - Work Report’ by Stonewall. A separate study organised by Romba, the American equivalent of EUROUT, revealed that 50% to 80% of LGBT individuals, who are out at business school, go back in the closet once they start working.

An important element of EUROUT is to empower individuals to create the right culture in business, so everyone can bring their whole selves to work without fear of prejudice.

“Concentrating on your job and not hiding in the closet has enabled me to be more successful,” said opening keynote speaker Alison Berryman, Chief Operations and Technology Officer for Barclaycard.

“Therefore, how we build a community of allies is something very dear to my heart.”

“While being out, I wasn’t involved in gay rights. I didn’t know I should be,” admitted Berryman, explaining her journey to becoming a leading light of the LGBTQ+ community.

It wasn’t until Berryman was nominated as a Top 50 change agent, as part of an initiative organised by The Guardian newspaper, that she realised her responsibility to be a role model.

“Not everyone is surrounded by supportive colleagues,” she said. “It takes a majority to change a culture and we need to keep the dialogue going. We need allies if we want to create better working cultures.

“To be an ally is to be that person who creates the right culture and stands up when needed. Day to day nothing might happen but it is still really important that you are there. The more people we involve the better.”

In his EUROUT address, François Ortalo-Magné, Dean of LBS, said: “At LBS, we are committed to inclusion. We embrace the many dimensions of the diversity of our community, aspiring to enable every individual to feel welcome and be their best.

“Through the research of our faculty, and fuelled by the energy of our entire community, we strive to be a thought leader in this arena, amidst a global realisation of the value diversity brings to organisations and society as a whole. LBS is proud to host EUROUT, a flagship event in the pursuit of a more welcoming world for all.”

The event, run by LBS’s Out in Business Club, attracted a record number of female attendees (30%) and speakers (45%). There were 450 delegates from 20 business schools and 50 companies including the Boston Consulting Group, Lloyd's, Barclays, Goldman Sachs, Google, Uber and Thomson Reuters Foundation.