Responsible business is good business – in the long term 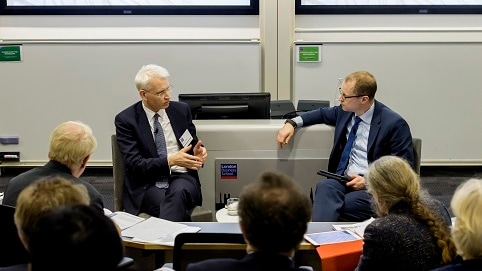 Interviewed at an invitation-only Responsible Business event at London Business School Centre for Corporate Governance (CCG), Lewis described how his business has gradually switched from coal power to renewables, the motivations for making that change, and the trade-offs that needed to be negotiated along the way.

When Lewis joined E.ON in 1993, as an engineer with a Masters in pollution and environmental control, his role focused on removing particulates from emissions. Since then, it has evolved into reducing carbon completely. He has always viewed responsibility as a core business issue rather than as a CSR add-on. This commercial perspective enabled him to move through a number of Corporate Strategy and Managing Director roles, before being appointed CEO of E.ON UK in 2017. He is therefore an exemplar for what it means to make sustainability a board level issue.

Lewis described the interaction between the different motivations for the change in strategy: commercial and responsible business. Neither one followed the other – they developed in tandem. Horizon scanning led E.ON’s leaders to conclude that their coal-oriented portfolio was on the wrong side of trends in societal acceptability. At the same time, the move to distributed renewable energy would lead to the possibility for greater value-creation in the customer-facing parts of their business. It really was a case of the good thing to do being the commercial thing to do.

When challenged on the trade-off between responsibility and shareholder value, Lewis was robust: “In my experience they are almost always aligned. You have to make a profit to be a sustainable business. But you also have always to be looking to the long-term, scanning the horizon for changes in society’s attitudes, so you’re not on the wrong side of the trends. So a sustainable business also has to be a responsible business.” Lewis used the 2010 decision to axe the coal-fired Kingsnorth power station as an example: “It was partly motivated by economics and partly because we didn’t see a future in fossil fuels”.

It could be argued that the alignment of interests reflects the nature of E.ON’s business and its connection with one of the key issues of the day: climate change and the associated energy transition. With the risk of stranded carbon assets, and the potential for rapidly changing social views of major polluters, it may well be true that in this sector doing well means, more often than not, doing right. In other businesses the trade-offs may be harder and more immediate.

Where Lewis did acknowledge a trade-off, it was in the pace of transition. E.ON could have moved to shut down coal and enter renewables quicker and sooner. But if done prematurely, this would have had costs to society as well as the company: the company would have had to mothball productive assets early, at a time when replacement renewable energy sources were higher cost. This would have resulted in lower funds for investment in renewables and higher costs for consumers - a genuine destruction of society’s resources. “It can appear that the industry is resisting,” he acknowledged. “There is tension, played out in company and society. We have a huge amount of capital invested in fossil fuels. If it is written off, there is massive value destruction to society. Therefore, we have to make choices about where the trade-off is between delivering value with existing assets and bringing in a new way of generating electricity.” Indeed, effectively destroying current carbon-based resources could even have slowed the pace of change towards the point at which renewables became commercially preferred, which Lewis contends would always be the game-changer in energy transition. You need to do it cheaper and cleaner.

“We could have stopped investing in fossil fuels when we started investing in renewables. There was a clear decision at the time – society needs these (carbon-based) assets; renewables are too expensive.” As a result, even though E.ON was committed to transitioning away from fossil fuels, it also needed to make this transition slowly to avoid sharp increases in prices. So the trade-offs that Lewis needed to balance was not only between investors and the environment, but customers also.

Since then, he reflected, partly through E.ON’s efforts, the cost of renewables has fallen enormously; by a factor of five for solar and three for wind. Would this have happened without investment made possible from returns on coal-based assets? However, the challenge ahead remains immense. If decarbonisation is to be achieved, 900 terawatt hours of production will need to be replaced. Companies and society, through the regulatory and political process, need to figure out the right balance, the appropriate pace of change.

Lewis said that shareholders had been supportive of E.ON’s transition. “Shareholders’ interests and the goals of a responsible business are aligned in the long-run,” he said. He felt that the current debate about shareholder primacy was a red herring. He didn’t believe that any of their decisions would have been changed by a different balance of stakeholder powers: “because if you want a sustainable business you have to create value”.

E.ON has placed great emphasis on reporting of non-financial and responsible business metrics. Lewis views this as an important part of the company meeting its societal obligations. It also helps them in talent markets. E.ON is competing in a tight market for the best technical skills and ability to innovate in a customer-facing environment. A sense of purpose in the objectives of the company creates a sense of excitement and certainly helps give an edge in recruitment markets, according to Lewis.

Listening to Michael Lewis talk about his experience at E.ON, you come away with a more nuanced view of responsible business than is evident in often polarised debates. It’s simplistic to say that there is never a trade-off between responsibility and shareholder value. There can be. But this does not mean that changing the balance between different stakeholder rights would help. Because over the long-term, more often than not, the interests coincide. The key question then is one of pace of transition. Existing assets and practices represent resources not just of the company, but of society. The quickest possible move to the responsible business endpoint may incur costs for stakeholders other than shareholders, in terms of higher prices, lost jobs. And it may even slow down the progress towards a sustainable future by discarding resources that can fund the transition.

These trade-offs are the stuff of business leadership and judgement. But what is clear is that those judgements need to incorporate responsible business considerations rather than just a narrow view of short-term shareholder value. We can leave the final word to Lewis: “You have to be tuned in to what is going on around you. It is important not to be caught on the wrong side of megatrends. And climate change is the defining issue of our era, certainly for our industry.”