Managers often default to cost cutting as the best way to begin to regain competitiveness. Jules Goddard believes that will only make things worse. 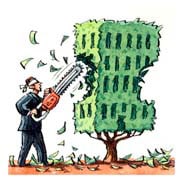 A “cost strategy” is a contradiction in terms. If it is a strategy, defined as a unique way of adding value, then costs are simply a measure of the monetary effort required to execute it. If cost is the focus of attention, then strategic thinking is superfluous. All that is required is the determination to cut costs. Costs, then, are not the basis of a strategy, but the result of putting it in play.

Early in its history, the Ford Motor Company managed its costs supremely well by focusing on something else. Henry Ford arrived at the idea of mass production by first imagining the possibility of mass marketing. He started with a hypothetical price, not a cost. He asked himself how many cars he would sell if the price were just $500. The answers so excited him that he put his mind to finding a way of “making the price”. It was this “transitional object” that led to the assembly line. Ford described his philosophy in the following way:

Our policy is to reduce the price, extend the operations, and improve the article. You will notice that the reduction of price comes first. We have never considered any costs as fixed. Therefore we first reduce the price to the point where we believe more sales will result. Then we go ahead and try to make the prices. We do not bother about the costs. The new price forces the costs down.

Ford’s insight still has to be fully appreciated and understood. It is remarkable how many business people still to this day set prices on the basis of their costs, rather than vice versa. The moral of this illustration is clear: as a business executive, you incur a cost for no other reason than to pursue a strategy; and it is the strategy, not the cost, that determines the competitiveness of your business.

Both in theory and in practice, costs tend to be treated as a bad thing. They are seen as being too high; they need to be cut; they are symptomatic of waste, excess, profligacy and irresponsibility. Consultants are expected to reduce costs, not add to them. An incoming chief executive will normally want to rationalize costs, not justify them or grow them. Competitiveness is usually defined in terms of the cost base — and the lower the better. Predator companies will traditionally want to make economies in their newly acquired prey. It is rare acquirer who is looking to grow the cost base.

Why is this? Why is there an assumption that costs are biased on the high side rather than the low side? Is there any evidence, for example, that cost-cutting strategies enrich shareholders? Do investors employ managers principally to strip out cost? Zealous cost cutting is surely a sign of a lack of strategic imagination. Shareholders should step in and say, “Enough is enough; change the strategy, not the costs!”

I can argue that any cost carried by a business is just as likely to be too low as too high. In other words, we assume that cost levels in a business are not biased one way or another. In the case of inventory, for example, as many materials, parts and products will be under-stocked as over-stocked. In the case of quality, as many products will be under-engineered as over-engineered. In the case of marketing, as many service levels will be set too low as too high. In the case of compensation, as many salaries will be too stingy as too generous. It is not, for example, self-evident that the CEO is being paid too much — or too little. The presumption that costs are more likely to be on the high side than the low side is simply sloppy thinking.

The rule for cost control should be: cut back on those existing costs that are not germane to the strategy and invest in those costs that, if they were to exist, would strengthen the strategy. As a concept, cost leadership is as meaningless as price leadership or operational leadership or working capital leadership. Cost leadership makes sense only in the context of a commodity market that, by definition, is a set of trading conditions characterised by an absence of competitive strategy. Every company is competing on the same terms. Thus, the only differentiating variable is the cost base. The more that companies are seduced into believing that cost leadership is a viable strategy, the more commoditised markets become, the less their wealth-creating capacity and the slower the growth of the economy of which they are a part.

The emphasis that top management places on cost is inversely proportional to the trust they place in their middle managers to make responsible decisions. When dealing with costs, managers are more often assumed to be profligate than frugal — and generally to err on the side of waste, extravagance, irresponsibility and indiscipline — hence the need for supervision. Left to themselves, most managers would become spendthrifts, with very little concern for shareholder value, particular when times are tough. Indeed, the main role of senior management is to rein in the natural exuberance of middle managers.

The traditional model of management has the unintended consequence of making cost cutting the default option. In the standard version, top management sets the strategy and everyone else executes it. Skilful execution is defined as the minimum cost to deliver the strategy. The only variable subject to middle management discretion is operational efficiency. It is no surprise that many managers interpret this rule to mean “the lower the cost base the better”. When pressures on margins increase, better execution implies even lower costs. “Managerialism” mistakenly has a built-in bias to interpret competition in cost terms rather than value terms.

Competitiveness, the ability to compete profitably, is set by the firm’s strategy, not its costs. Many companies that boast the highest costs in their industry are also the most competitive — such as Porsche, Prada, Dyson and McKinsey. Indeed, the most valuable brands in the world typically combine the virtues of high cost, high price, highly perceived quality and high profitability. Low-cost brands typically underperform their higher-cost competitors.

The concept of competitiveness is often misunderstood and misapplied. If it is to be used at all, then it can only be applied logically to corporate strategies, business models or what Michael Porter refers to as a company’s “unique mix of activities”. A cost or an expense cannot be described as competitive any more than can a revenue stream or a cash flow. These are simply the visible manifestations and inseparable elements of a strategy. Divorced from their strategic context, a particular level of working capital, for example, cannot meaningfully be called either competitive or uncompetitive.

The popular managerial expression “relative cost” is equally misleading. Comparing your cost with a competitor’s cost (a remarkably popular form of benchmarking) can only be relevant if both companies are competing with identical strategies, in which case the cost base is carrying the entire burden of delivering profitability. But if this is the case, the problem is not the magnitude of the cost base but the absence of strategy. The attention of management should not be focused on relative efficiency but on the need for a differentiating strategy. In short, reliance upon efficiency usually betrays an absence of strategy. The rhetoric of “operational excellence” is generally camouflage for a dearth of strategic ideas.

A senior management team that is unable to formulate a strategy for making wealth-creating use of the resources available to it has every right to reduce the headcount provided it starts with its own heads. Firing others simply on account of being unable to find gainful employment for them — which is the job of senior management — is all the evidence that shareholders should require to invite these senior managers to find work elsewhere.

The art of management is to manage a business in such a way that the need for operational excellence, continuous improvement, cost leadership, process redesign, corporate renewal, cultural change and so on is redundant. Moreover, the declared pursuit of these objectives should count as a clear admission of managerial failure.

When executives reach for these remedies, you can be sure that the business has been woefully mismanaged and failure cannot be far away. You don’t manage costs, you design the business strategy and the strategy establishes the necessary cost base. Costs are an outcome of the strategy, not the goal of the strategy.

Jules Goddard (jgoddard@london.edu) is a Research Associate in the Management Innovation Lab (MLab) and a Fellow of London Business School.