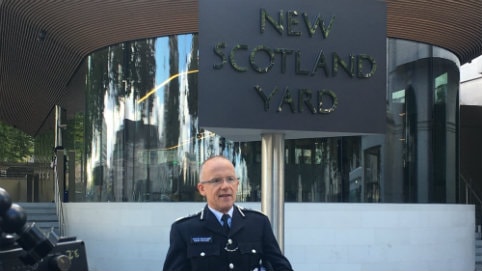 An effective crisis management strategy must establish who takes charge during turmoil and how the organisation communicates with the public, according to counter-terrorism expert Sir Mark Rowley. This is his first lesson for leaders dealing with a corporate fallout.

The Metropolitan Police’s former Assistant Commissioner for Specialist Operations and National Lead for Counter-Terrorism Policing believes the insights he gained while tackling terrorists in the UK can be applied to the business world.

“There isn’t an off-the-shelf strategy for dealing with an emergency and you can’t just hire a crisis communications expert,” he said at ‘Leading Through Crisis: In Conversation with Mark Rowley’, a London Business School (LBS) event. He was speaking to Richard Hytner, Adjunct Professor of Marketing at LBS.

“In these situations, you have nowhere to hide and your strengths and weaknesses are exposed,” he added. “The question you’re being asked by customers and stakeholders is: does this organisation have competence, a soul and leaders who care? Do the people in charge have a post-incident plan?

“A crisis exposes the very essence of an organisation and its leaders, so how your business operates on a daily basis in terms of core values, culture, competence and management will inform how you handle any emergency.”

As national lead for UK counter-terrorism policing (2014–18), Sir Mark worked with MI5 and other intelligence agencies to mitigate the threat from terrorist groups such as ISIS. His team prevented 23 attacks after the murder of Lee Rigby in Woolwich in 2013, including 10 from March 2017.

Sir Mark led policing through the 2017 terrorist attacks at Westminster Bridge, Manchester Arena, London Bridge and Finsbury Park mosque in north London. His experiences have taught him the following lessons about crisis management:

1. Your values are critical. If you’re fully exposed and your values aren’t right, you can’t fix the problem with a shiny communications plan.

2. You need a diverse top team that is able to challenge and be constructive, is coherent and collegiate and understands how the organisation works. A well-constructed team will succeed under pressure.

3. Rigour supported by a constructive culture is essential, because that’s how you spot risks, issues and threats. The team needs to systematically work through tasks, spot worst-case scenarios and come up with sensible plans for them.

4. You must have a well-controlled response when dealing with a crisis situation. It needs to be practised and drilled.

5. You need a command structure for who’s in charge when there’s a crisis. Is it the CEO, COO or head of legal? Communication is also critical; you have to lead the narrative by explaining what’s happening within a few hours of something going wrong, even if you have little information to hand. Use conventional and social media to get the message across.

6. It’s important to embrace intense scrutiny. Be prepared to say, ‘We’re an organisation that’s accountable to the public, our customers and our stakeholders. In a crisis it’s your job to be authentic, show what sort of organisation you work for and the sort of leader you are.

In January 2018, Sir Mark announced he was retiring from policing after 31 years’ service. Under his leadership, the number of arrests by counter-terrorism officers doubled during 2017.

Prime Minister Theresa May thanked Sir Mark for his contribution, saying he had provided leadership and reassurance during some of the worst terrorist attacks in the UK. He received a knighthood in 2018 for services to policing.