Complacency is the enemy of success 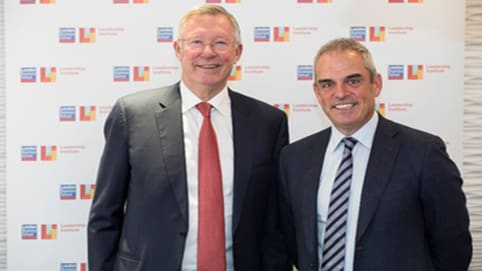 Sir Alex Ferguson who was knighted in 1999, following Manchester United's remarkable Treble campaign and 49 trophies, and Paul McGinley 2014 Ryder Cup winning Captain and one of golf’s most influential figures, told an audience at London Business School that complacency should be the manager’s biggest watch-out.

Complacency, the two said, is the most critical challenge to combat as a leader.

“Complacency is a disease,” Sir Alex Ferguson told the intimate audience at London Business School. “Two nil at half time is a dangerous game; you can’t give an inch”. Paul McGinley who is back fresh from captaining the Olympic Irish golf team in Rio added that, as a captain, it’s crucial to get your team “re-focussed on the work still to do”.

“The role of the captain is to provide structure, strategy and energy,” McGinley said. “It is not to tell your star player whether to play a point with a five or a six-iron.”

In fact, McGinley believes that captains or managers should tread very carefully, choosing judiciously where and when to intervene. Pointing to the example of the partnership between a golf pro and his caddy, he said: “It’s important to empower partnerships within the team. You have to be very careful about which dynamics you disturb.”

As the leader, “everyone has to be rowing in behind you, giving you the best information so you can make your calls,” McGinley explained.

And those calls can sometimes be tough, both Sir Alex and Paul admitted. Sometimes they will involve risk. “You have to be prepared to gamble,” said Sir Alex whose teams were renowned for scoring important goals in the final minutes of games. “Your job is to send the fans home happy.” With the average lifespan of a football manager now just 10 months, and some corporate leadership horizons not much longer, it’s a salutary lesson.

So too, the two agree, is getting as many people as possible in your corner through integrity and trust.

“The more empathetically you can manage human beings, the better team you build,” McGinley explained. “It’s how you build trust”, Sir Alex added, concluding: “When you build trust like that, it lasts forever.”