China moving toward a digital civilisation

The Belt and Road Initiative, trade wars, fintech, innovation and culture were among the many issues discussed at this year's China Business Forum. 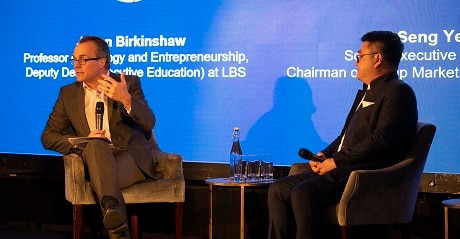 The Forum, which is organised by London Business School's China Club, took place in the grandeur of The Landmark Hotel against the background of a potential trade and security stand-off between the US and China. However, talk here focused on the vitality of a relationship and the importance of building stronger ties.

The event opened with an address from LBS Dean François Ortalo-Magné and China Charge d’Affaires, Chen Wen, who both spoke of the enduring cultural, business and learning ties between China and the UK.

First keynote Stephen Perry, Chairman of The 48 Group Club, addressed the thorny issue of populism and protectionism: "China is not taking up the position of being hostile, of being aggressive, of being offensive," he said. "I don't think it's in anybody's interest for the world to come to a standstill. I don't think that America could afford to have a breakdown in the world from this crisis and I think China anticipates that."

He also spoke about the misconceptions around the Belt and Road initiative, an ambitious infrastructure project to connect China with Africa and the Middle East.

"In many ways China and the UK, are natural trading partners," said Professor Yueh. "China is the world's biggest trader, but it's rebalancing its economy towards more domestic demand, its own consumers firms and services. The UK is the world's second biggest exporter of services. China is now one of the biggest outward investors in the world. Belt and Road, one of the initiatives that we've heard about, is a huge source of capital. And London is an international financial centre. So there are a significant amount of complementarities."

A panel also discussed whether capital is "fuelling or fabricating" growth and the rise of China as significant player in film-making and other types of intellectual property.

He described the UK fintech scene as "super interesting". In the UK he said "it comes down to talent" in fintech and creative industries with film and TV in particular, bringing, "a lot of investment into the UK".

Conversations were also informed by the presentation of School's first case study on China's digital economy. The forthcoming Innovation and Agility at Tencent’s WeChat has been co-authored by Professor Birkinshaw with Sloan Fellow Dickie Liang-Hong Ke and Enrique de Diego (MBA2017), Consultant with Bain and Company. It analyses the evolution of Chinese giant Tencent, one of the top ten listed companies in the world. The study focuses on Tencent platform WeChat, the social networking and lifestyle app created in 2010. It describes the emergence and growth of WeChat, and how it came to dominate large parts of daily life in China with 1 billion users. It also provides insight into how the platform operates, and the current strategic challenges facing WeChat.

"Back in 1999 when Pony Ma founded (WeChat parent) Tencent the idea was to test if a platform strategy could flourish in China," Lau reflected. "Since then WeChat has become fundamental infrastructure for society. It can be an infrastructure for our competitors and even public services. Everyone who uses WeChat contributes and they grow together. That's how WeChat has evolved.

"The case study explores this conundrum behind building something other companies benefit from but where you also make a profit. The paper examines this balance and how key performance indicators and returns come into play.

"WeChat has been blessed with some macro drivers," admitted Lau. "China was booming, there was pent up demand and the internet was in its infancy.

"But the most important thing for WeChat is we care deeply about user experience. When you truly care about user experience everything else is a result of that. For example, advertising shouldn't be disruptive in a digital world. Through technology and algorithms, advertising ought to be reframed to be something that helps the consumer choose something he or she needs."

Lau described Tencent as meeting core needs through entertainment with content their principle product. Asked about the future for the Tencent - the archetypal disruptor - Lau said: "Artificial intelligence is really exciting. Any potential unicorns have artificial intelligence somewhere in their technology. The world is moving toward an algorithmic world, a digital civilisation. However, platform companies have got a responsibility to make sure whatever tech we uncover meets the greater good."

Chinese customers tend to be price sensitive and will not pay higher prices for a service or product if they can save money elsewhere. They also tend not see value in paying more for enhanced features or durability. However, panellists agreed Chinese customers preferred products and services that promise greater efficiency.

In the penultimate panel, chaired by Russ Shaw, Founder, Tech London Advocates and Global Tech Advocates, experts discussedinnovation in China and compared it to the west. George Sun, Found & CEO KK Mandarin (MiF 2001), shared his story from financial services to founding his global Chinese language and culture teaching platform. He noted a growing appetite to learn about China and for the Chinese diaspora to reconnect to its roots.

In the afternoon keynote, consultant Weishan Xie shared his perspective on navigating the challenges faced by Chinese and western businesses on the global stage. His Kmind Consultancy employs a strategic and systematic innovation system that blends western consultancy methods with the thinking of Sun Tzu, the Zhuo era general and strategist, most famous for his treatise The Art of War.