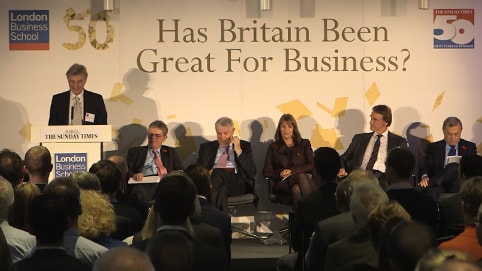 Prominent business leaders have spoken of their belief that, despite five decades of boom and bust, Britain has been great for business in the last 50 years.

Last night, at a unique event hosted by London Business School and the Sunday Times Business section to celebrate their respective 50th anniversaries, Sir Martin Sorrell of WPP, Jim Ratcliffe of Ineos, Carolyn McCall of easyJet and Lord Burns of Santander and Channel 4 debated the question: Has Britain been great for business?

Lord Burns of Santander and Channel 4 opened the debate with insights from his time as Treasury mandarin, recalling the era of damaging strikes, the 1974 Three-Day Working Week, the Winter of Discontent and the distance we have travelled since.

Lord Burns said: “The growth of the financial services sector and advisory businesses is a success story. Our success as an international finance centre is because we have welcomed talented individuals from around the world, we have been open to investors and we have avoided defending businesses that couldn’t keep up with global competition. Britain has thrived because of foreign investment, talent and supply-side reform.”

He added that: “The picture is now clouded because a long period of stability ended in tears with irrational exuberance, bad real estate debts and a full-blown banking crisis in the advanced countries.” But, he said: “Foreign investment, overseas markets and fresh expertise have also been a boost.”

Carolyn McCall of easyJet and Martin Sorrell of WPP, agreed with Lord Burns and the overwhelming majority of more than 300 senior executives surveyed by London Business School, who said that Britain has been good for business.

More than half (57%) said Britain has become more innovative over the last five decades. It is a view Carolyn McCall shares. “Britain has an amazing creative talent”, she told the audience of more than 200 at last night’s debate.

Comparing the environment for doing business in Britain with elsewhere in Europe, she said: “It is a simpler, easier environment. There is more inward investment. It is easier to performance manage people, labour laws are more flexible and corporation tax is lower.

“The biggest question hanging over us is the success of Europe and to this we need a clear and a positive answer.”

There was praise too from Sir Martin Sorrell of WPP for Chancellor George Osborne’s controversial austerity measures. “Austerity has been very important”, he said. “Thatcher, Blair and Cameron laid a base through leadership that made it much easier to flourish.”

Not everyone agreed with this optimistic verdict though. Jim Ratcliffe, CEO of Ineos and an alumnus of London Business School, warned against considering the question from inside the “London bubble”. “London”, he said, “is not Rotheram or Doncaster.”

Mr Ratcliffe’s verdict was altogether more bleak. He said: “Manufacturing in the UK has collapsed to 10% of GDP in the last 20 years. In the last five years we have seen 22 plant closures in the UK. It is a creeping disease. A lot of the North of England relies on manufacturing.”

Lord Burns too acknowledged that manufacturing has not performed as well as other sectors of the UK’s economy. “Skill levels have not always kept up with the changing needs of industry”, he said.

In common with 46% of the senior executives London Business School surveyed, fast-rising energy costs are the most pressing concern for Mr Ratcliffe: “Energy is at the top of the list. Gas in the UK is three times the price of gas in the US and electricity is double the price.”

The skills-gap too, is a concern, he suggested: “Thirty to forty years ago we had a good set-up like the one you can find today in Germany and Switzerland with technical colleges and apprenticeships. The UK had this, but we have lost our way.”