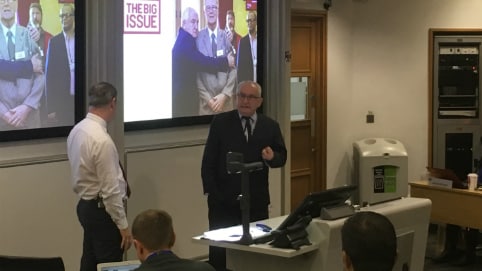 Governments must re-examine how they engage with the problem of poverty, Lord John Bird, founder of The Big Issue, told Sloan fellows at London Business School (LBS).

Now a renowned entrepreneur and member of the House of Lords, Bird’s start in life illustrates the point: “I learnt to read in a boys’ prison when I was 16,” he said. “Up until then I’d cost the state an enormous amount of money. It’s expensive to keep people poor. It costs the UK £1 million on average to produce one Big Issue vendor. 80% of our vendors grew up in local authority care, which costs £15,000 a month, up to £250,000 a year.”

He criticised underinvestment in schools, stating that 30% of the children who fail at school go on to make up 80% of the prison population and 50% of the long-term unemployed.

Lord Bird referred to the PECC framework he created to examine how organisations working in this area operate. PECC stands for Prevention, Emergency, Coping, Cure. Most resources and effort currently go into emergency and coping, he said, calling for an urgent change in approach.

“80% of the world’s social pound is spent on helping the poor get through that day or that month. We’re spending millions every year but it doesn’t get people out of poverty. Why? Because nobody is asking the question, ‘Is this prevention, emergency, coping or cure?’ Is this getting people out of poverty or is it simply holding their hands when they have a hard day?”

Building more hostels isn’t the answer to homelessness, Lord Bird said. “That just moves the homeless from the streets – from damp homelessness to dry homelessness. Their lives are still broken and the reasons they have become homeless are never addressed.”

Lord Bird was speaking at an event organised by Sloan fellow John Gilligan, who is a non-executive director of Big Issue Investments as well as a former LBS student. Gilligan presented a case study on The Big Issue, showing how the business, which began as a tiny, chaotic start-up, nearly went under three months after its launch in 1992. It was selling three times the number of magazines in its plan but losing nearly £30,000 each month – 10 times the monthly losses anticipated in the business plan.

Lord Bird revealed how he managed to turn its fortunes around by reinventing the business model from one reliant on advertising revenue. In the past 25 years it has sold over 200 million copies and has changed the lives of many of the 92,000 people who have sold it around the UK.

The Big Issue was set up with capital from The Body Shop founder Gordon Roddick. Lord Bird offered some tongue-in-cheek advice for anyone seeking to launch a business with the aim of achieving social impact. “If you meet someone with a shedload of money, stick to them.”

The Big Issue’s slogan is “a hand up, not a hand-out”. It offers homeless people the opportunity to re-engage with the world of work by becoming microentrepreneurs who buy the magazine from The Big Issue and sell it to the public. Earning an income is an empowering step towards rebuilding a fractured life.

Big Issue Investment, which is currently fundraising for its third fund, manages or advises £130m of social investment funds in the UK. Ventures it supports include a provider of care homes in the highlands of Scotland, an NHS dentist, a bus cooperative in east London as well as a number of businesses with real social impact across the country.