HSBC innovator recognised for work within a large corporate 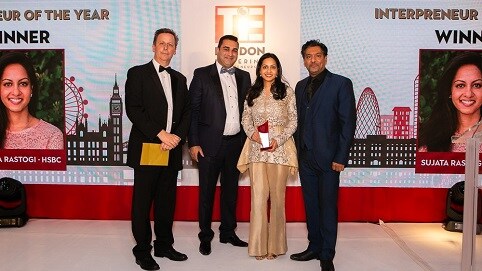 Sujata Rastogi (MBA 2012) has been named as the inaugural “Intrepreneur of the Year” by the London Chapter of The Indus Entrepreneurs (TIE).

The TIE group is a non-profit organisation of business people with origins in the Indus region, which focuses on mentoring, networking, education, funding and incubation. The Intrepreneur award category recognises individuals who pioneer change within large organisations, doing truly entrepreneurial things.

Rastogi was chosen for her work at HSBC Private Banking where she has been global project lead for an online banking platform, partnered with fintechs, developed a discretionary portfolio management service and set up an operating model between private banking and asset management. She was also the programme manager for HSBC's sale of a portfolio of assets in Switzerland to LGT Bank. TIE judges said Rastogi was recognised for her strategic thinking.

Currently working on the bank's proposition for next generation entrepreneurs, Rastogi said: “Interpreneurship to me is about the convergence of being an entrepreneur and leading in a large corporate. To compete in the market today, entrepreneurs and corporates need to constantly innovate, up-skill and partner with others in the ecosystem. LBS gave me the skills to not just take part in change but to lead it.”