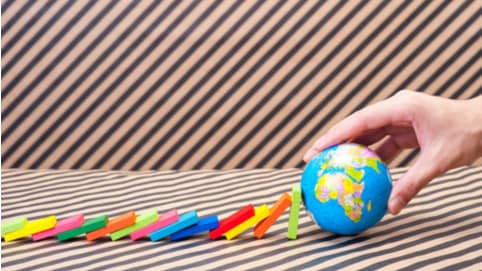 Polman urged graduating London Business School (LBS) students at the 2017 Congregation ceremony to become part of a new generation of leaders with moral conviction, favouring “harder rights over easier wrongs” and to implement the SDGs.

“Meeting the SDGs will require transformative partnerships – governments, businesses, NGOs and, yes, business schools, all working together to develop solutions. More than anything, it will require a new generation of leaders: men and women driven by a different set of ideals. Above all, men and women able to restore trust.”

Polman’s reminder of the 17 SDGs, set and agreed by 119 countries at the UN in 2015, was timely. It came after US president Donald Trump’s withdrawal from the Paris climate agreement, which also came into effect in 2015.

The SDGs exist as a roadmap to end poverty and protect the planet. But Polman argued they also provide a “huge economic opportunity” if organisations embrace and integrate the goals into their everyday business.

Polman said: “Some estimate 12 trillion dollars of economic growth will be unlocked [by 2030] if the goals are implemented; 380 million jobs will be created. No wonder that some are suggesting that the next phase in the evolution of capitalism will be the age of sustainable capitalism.”

These estimates come from a 2016 report by the Business and Sustainable Development Commission, which states that action in four areas – energy, cities, agriculture and health – would help meet these figures.

“The world has done well,” said Polman. “For all its flaws and inequalities, capitalism has delivered a huge benefit. It has lifted millions of people out of poverty.

“It has raised the aspirations and living standards of many. No wonder that Barack Obama was moved to know that towards the end of his presidency it was the best time to be a young person.”

In a heartfelt message, Polman reminded LBS graduates that they were a “lucky bunch” belonging to the top 2% of society.

“Only 2% of us, believe it or not, in this world have an opportunity to go to university, find jobs, move around where we want, make a living and become independent. And that's not true for 98% of the population.

“So my message is simple: if you belong to that 2%, put yourself to service of the 98%, you've just won a lottery ticket. Share the bounty with others.”