Shopify and the alternative path to entrepreneurial growth

Suppose you’re intent on founding your own company, but – like many would-be entrepreneurs – you simply don’t have the technical skills that you know will be needed to build your enterprise. You have two options: you can “buy” those resources by hiring software engineers and/or bringing in technical co-founders, or you can “contract” the tech development out wholesale to external developers – both of which require further social or financial capital – in addition to the your original business idea.

Now an intriguing new piece of research into the ecommerce sector by Gary Dushnitsky and Bryan Stroube of London Business School, to be published in the November 2021 issue of Journal of Business Venturing Insights, puts this assumption to the test – and points to a third path – one made possible by the use of low-code tools.

The research analyses the emerging phenomenon of “low-code” entrepreneurship, whereby a layperson can become a fully functioning online retailer without needing to directly write code, and instead use existing proprietary tools, application programming interfaces (APIs) and platforms to develop their idea. Entitled ‘Low-code entrepreneurship: Shopify and the alternative path to growth’, the paper sets out to understand the impact on entrepreneurial activity of the advent of such platforms, asking such questions as ‘How do they affect growth trajectory and entrepreneurial success?’ and ‘How do they change the human and financial resources required to fuel scale-up and growth?’

To address these questions, the authors studied all 418 US-based ecommerce startups that used venture capital (VC) funding to fuel rapid growth during the 2010s. Pitchbook, a major source of venture capital information, was used to identify the population of ecommerce businesses.

The analysis compares the ecommerce startups that use of one of the most widely low-code tools (Shopify) to those that don’t. Shopify was chosen because it is a powerful technological resource that equips users with a full suite of business functions, including payment, marketing, shipping and customer engagement; thereby not only significantly reducing the cost of launching an ecommerce business, but also making it substantially more accessible as no technical skills are necessary. To identify Shopify-based startups, the researchers collected data from BuiltWith, a leading website profiler that provides analytics on technology adoption.

The authors focused on growth-orientated ecommerce startups for three reasons. First, the ecommerce sector is home to would-be entrepreneurs who often identify profitable business opportunities yet do not personally have technical expertise. Second, it is very well suited to this type of empirical investigation – as all ecommerce businesses need a public-facing website, data on the technologies and tools they use to run the websites can be systematically collated. Third, the sector is large in terms of financial value and has seen significant entrepreneurial activity (and VC funding) over the past decade.

The study revealed significant differences between start-ups that used the Shopify platform and those that did not, starting with human resources. Startups that used Shopify employed 5.9 full-time employees during the first year – significantly lower than the 7.6 full-time employees for non-Shopify startups. The two groups of startups were also markedly different in their use of financial resources: only 76% of Shopify startups recorded a first funding round, versus a figure of 86% for non-Shopify peers.

Analysing funding rounds for which information was available confirmed the picture: the Shopify-based startups raised significantly smaller investments ($0.99 million) than other ecommerce startups ($1.96 million). The smaller investments were associated with smaller valuations, although the differences were not statistically significant (average first-round valuations for Shopify and non-Shopify startups were $6.79 million versus $9.31 million, respectively).

Tellingly, the lower valuations did not appear to come at the entrepreneurs’ peril: Shopify-based startups were significantly better at equity retention during the first round; forgoing only 19.7% of equity compared with 25.2% for non-Shopify peers. Taken together, the use of Shopify technology was associated with a more “lean” operation insofar as it required less external funding and hence meant surrendering a smaller part of the equity.

The study also explored whether the early differences in startups’ resource profiles were reflected in their recent performance and, again, detected notable differences: about 83% of the Shopify startups exhibited continued operations as of the end of the sample period; significantly higher than the 68% of non-Shopify peers with continued operations. The authors attribute this difference to a higher rate of dissolution as well as acquisition among the non-Shopify startups; 18.1% versus 9.0% for dissolution and 13.95% versus 7.7% for acquisition, respectively. (See Figure 1. Shopify and non-Shopify startups’ final status.) 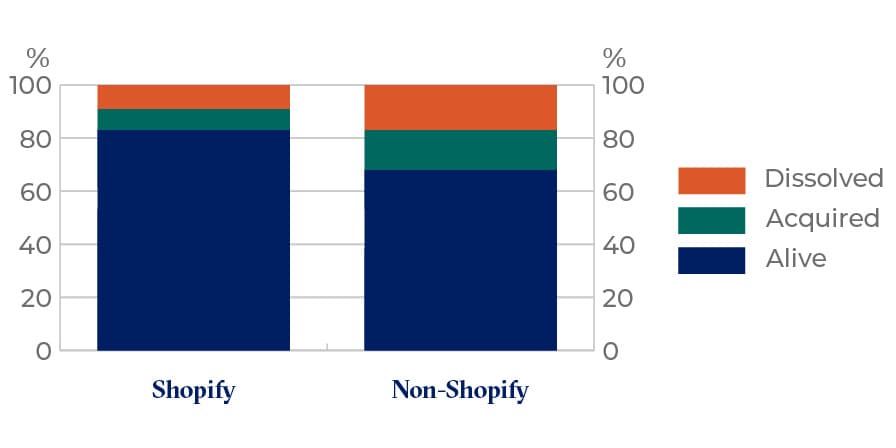 The findings of the study suggest a potential new “low-code” approach to entrepreneurial success. Shopify-based startups begin operations with fewer financial and human resources than their ecommerce peers; yet, despite the leaner beginnings, they achieve a similar level of successful exits. Moreover, Shopify-based startups feature a unique profile of growth and value creation, which the authors term a “lean success” profile. While traditional indicators suggest a mediocre level of success (for example, Shopify-based startups have significantly lower valuations and fewer employees), they simply mask a unique “lean success” profile where the cash-on-cash return for investors – and the value created per employee – place Shopify-based startups well on par with their ecommerce peers. In other words, Shopify startups deliver “value per head” similar to their peers but require substantially fewer financial resources to do so.

The findings stimulate a new perspective on the entrepreneurial journey. The advent of low-code tools may make entry into entrepreneurship more accessible – especially for non-technical people – and support a leaner path for scaling up and achieving growth. The alternative, more accessible and leaner path may be particularly appealing nowadays. Shopify’s track record shows that many people affected by the financial crisis of 2008 have found the ease and affordability of Shopify to be highly attractive, thus fuelling its initial growth spurt. The plethora of low-code tools now widely available may be similarly attractive to those who are product or marketing-oriented and who have been affected by the turmoil brought about by the Covid-19 crisis. As the thought leader Benedict Evans recently noted “These businesses come from people who’re great marketers or product people, they’re great at bags or coffee, and they’re not technologists, and maybe they don’t have to be.”

The advent of low-code tools also has significant implications for the investors who furnish the financial resources for startups. Venture capitalists argue that entrepreneurial outcomes follow a power-law distribution whereby most startups exhibit low valuations and few are associated with high valuation. The startups in the latter category, it is argued, are key to investors successfully securing the necessary return on their investment. However, the findings of the new study suggest that investors may experience similar cash-on-cash returns even at lower valuations, because the necessary financial investment in low-code-based startups is less. To the extent that the time to realising the investment is shorter, backing low-code startups may be associated with higher annual returns.

Implications beyond the world of ecommerce

Dushnitsky and Stroube also point to a much broader potential application of low-code tools outside the realm of ecommerce entrepreneurship. Similar low-code tools are now being widely developed for use in many industries; most notably in the “creative” economy, where artists, musicians and writers set up as entrepreneurs to scale and monetise their creative talents. As Andy Warhol famously said, “Making money is art ... and good business is the best art”.

If at first you don’t succeed

Are investors averse to past failure when it comes to funding? Or can cues about an entrepreneur’s skill tip the odds?

In this podcast series, Gary Dushnitsky explores the innovation challenges within big corporates.

How Lemonade tore up the insurance rulebook