Some entrepreneurs identify business opportunities through rigorous market analysis. Others stumble on their idea by chance. Ismail Ahmed DLEMBA2010, founder and executive chairman of mobile-to-mobile money transfer firm WorldRemit, spotted a gap in the market because he had personal experience of the transformative effect of migrants sending money home. The reason: remittances.

Ahmed grew up in Hargeisa, the capital in the Republic in Somaliland. He describes it as “relatively aﬄuent and beautiful”.

“Somaliland is a country deﬁned by migration and remittance,” he says. “There was a gold rush caused by oil in the nearby Persian Gulf during the 1970s. Many Somalis, including my brother and sister, went to work in the Gulf. Money sent back by those migrant workers helped make Hargeisa prosperous.”

Ahmed founded WorldRemit in 2010. Today it is a booming global company, sending money from more than 50 countries to almost 150 countries, with 720 employees worldwide and a turnover of roughly £95 million a year – up 50% in the last year alone. It has more than 3.5 million customers. Even though it has not yet turned a proﬁt, it has been hailed as “a unicorn in waiting” – a ﬁrm worth at least US $1 billion (£750 million).

Ahmed’s idea was for a mobile-based, online money transfer system, which disintermediates and undercuts the banks and traditional remittance ﬁrms such as Western Union, but is more secure than informal networks. It ﬁrst came to him after he won a government scholarship to study economics at the University of London and started sending home the proceeds of his part-time jobs, including summer fruit picking in Kent. He soon witnessed the shortcomings in the system ﬁrst-hand: “I wanted to send money regularly, but the banks often couldn’t do it because many recipients are unbanked. So, I relied on costly and inconvenient informal networks and agents. It could take weeks for the money to arrive – if it got there at all.

‘Remittances are worth more than three times all aid budgets combined ... they are the largest source of foreign currency in some countries’

“If you had to travel to the agent locations that could cost £5 or £10 in fares. You would typically pay £25 in fees to transfer £200. And, at the other end, the recipient might have to journey for hours to pick up the money.” Transaction costs could easily eat up 20% or even more of the money sent back.

After his degree and research at the University of Sussex, which focused on remittances, Ahmed returned to Africa. A few years later he lost his job at the UN in Kenya after he blew the whistle on widespread corruption. Fuelled by a powerful sense of injustice, he came back to the UK determined to ﬁnd a better way of sending money. His ﬁrst step was to enroll at London Business School’s Entrepreneurship Summer School as part of an EMBA programme. “LBS was part of my strategy to develop my business. I used the opportunity to assess and shape my business idea and tap into the global alumni network that is incredibly valuable for aspiring entrepreneurs,” he says.

Compliance was probably the greatest single challenge for his ﬂedgling business, he says: “From the start, we wanted to build a global business. But you need a license in every country, which sometimes have conﬂicting requirements. Just to operate in the US, we had to apply for licenses in each of the 50 states.”

Despite WorldRemit’s rapid growth, there have been setbacks. In the early days the company tried to expand into Canada – but it turned out that the Canadian online market was very diﬀerent from the UK; not least because, at the time, local debit cards couldn’t be used online. “We got it wrong and it took us time to ﬁx the challenge we faced to oﬀer our customers convenient pay-in method,” Ahmed remembers. Finally they got it right and Canada is now one of their biggest markets. 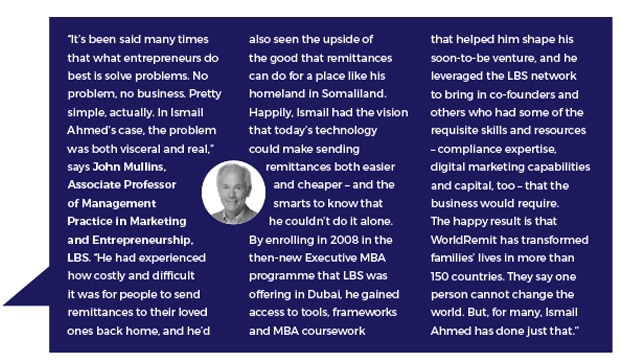 The company has since gone through several rounds of ﬁnancing. In the early years it relied on super-angel investors from the LBS network that invested US$7.5 million in the business. “This investment enabled us to delay VC funding to a stage when we had the traction and revenue base that helped us to be selective of who we take money from,” says Ahmed. The company has raised more than US$200 million in funding backed by Accel and TCV (early investors in Facebook, Spotify, Netﬂix and Slack) and Leapfrog, a social-impact investor. Ahmed confesses that raising capital and diluting equity is “the classic entrepreneur’s dilemma – whether to own 100% of a small pie or a slice of a much larger pie.”

For many brands and businesses, purpose is an afterthought or post-rationalisation, a sweetener drizzled on the surface of the enterprise to make it look better. But for WorldRemit, higher purpose is part of the recipe. According to the World Bank, the global value of remittances is about US$700 billion a year. “The value of remittances is more than three times bigger than all government aid budgets combined and they are the largest source of foreign currency in some countries, accounting for up to 10% of GDP,” says Ahmed. “They are key, not only to individual wellbeing but a vital engine for the economic development of many countries.”

He points out that a major advantage of remittances over aid is that, unlike aid, the payments don’t just ‘disappear.’ For example, “Only 20% of the Italian aid money in 2011 left the country and only a small fraction of this is likely to reach intended beneﬁciaries,” he observes dryly.

Ahmed has adopted a strategy of deferred gratiﬁcation to grow WorldRemit into a company with global reach. It has ambitions to capture 10 million users and has entered the new market of intra-regional remittances, launching in South Africa as a ‘send’ market earlier this year. As for becoming proﬁtable in the near future, he says: “We are close, but it’s still early days for us.” His ambition is understated – but limitless for all that.

Realise your leadership potential with our Executive MBA (EMBA). This transformative programme equips you with the business knowledge, leadership skills and networks to accelerate your career. Choose to take it in London or Dubai to suit your own plans

MohamedAl 3 years, 1 months and 9 days ago

Somaliland is not a country, it is a part of Somalia. Please correct your mistake. Kindly