Are you managing complexity?

At the heart of organisational complexity is the battle between emergence and entropy. Julian Birkinshaw charts the best way forward.

At the heart of organisational complexity is the battle between emergence and entropy. Julian Birkinshaw charts the best way forward. It is easy to label big companies as overly complex. But what does this mean in practice? What does complexity feel like to a front-line employee or a customer? Here is a personal anecdote that makes complexity a bit more real.

A few months back, my small consultancy business received a payment of £3,000 for some consulting work I had done for one of the top 20 companies in the UK, let’s call it Megafirm. I did the work 20 months earlier – it took then more than a year and a half for them to pay me.

As the delay in payment entered its second year, I started to ruminate on what had gone wrong, and I realised that this tiny problem was a microcosm of this bigger problem of complexity. Who, I asked myself, owned the problem? If I had been trying to get paid by a small company, the answer would have been obvious: I would have talked to the boss, he would have pulled out his chequebook, end of story.

But trying to get paid by a global company with 80,000 employees, it gradually became apparent that we owned the problem. My wife invested several days sending emails and calling people in India and Poland.

Megafirm had outsourced the problem to us.

Think about this point at a broader level, and the implications are scary. When companies become too complex to manage, they create costs for others. They impose a burden on the companies who have to deal with them. Suppliers get stuck trying to figure out how to get paid. Customers despair at the lack of joined-up thinking between the various divisions.

Regulators and government officials struggle to know who to talk to. And when companies lose control of their employees, as the banks did in the mid-2000s, taxpayers end up footing the bill. The complexity of our large companies is a curse. But we have to remember that complexity is also a good thing. Companies are complex by design because it allows them to
do difficult things. IBM has a multidimensional matrix structure so that it can provide coordinated services to its clients. Airbus has a complex process for managing the thousands of suppliers who contribute to manufacturing the A380.


There are three processes under way that collectively determine the level of complexity experienced by people in the organisation:

In short, as organisations grow larger they become insular and complacent. People focus more on avoiding mistakes and securing their own positions than worrying about what customers care about. Inefficiencies and duplications creep in. Employees become detached and disengaged. The organisation becomes aimless and inert. This is what I mean by entropy. 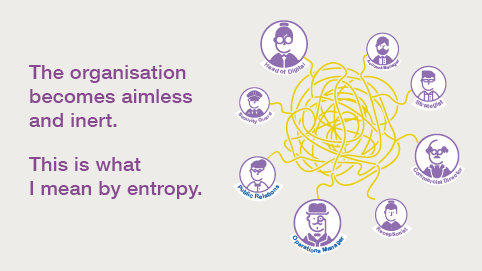 The trouble is, all three processes are under way at the same time. While top executives are struggling to impose structure through their top-down designs, and while well-intentioned junior people are trying to create emergent order, there are also invisible but powerful forces pushing the other way. The result is that everyone is running very fast just to stand still. The executive’s job is managing complexity. So what can we do differently? More and more the leader’s job is to manage the social forces in the organisation. This can take very different forms.

This is the equivalent of tidying your teenager’s room. It involves periodically taking out layers of management, getting rid of old bureaucratic processes that are no longer fit for purpose, or replacing the old IT system. It is thankless work, and doesn’t appear to add any value, but it is necessary.

This is the equivalent of giving a bunch of bored teenagers a bat and ball to play with. It is about providing employees with a clear and compelling reason to work together to achieve some sort of worthwhile objective. It isn’t easy to do, but when it works out the rewards are enormous.

3. Keeping the company open and transparent

Recall that the more open a system is to external sources of energy, the easier it is to harness the forces of emergence rather than entropy. What this means in practice is that leaders have to continually look for ways of bringing new perspectives into their company, and exposing internally focused procedures to external scrutiny.

There are plenty of other ways of increasing openness: refreshing a management team with outside hires, transferring employees across divisional boundaries, making people explicitly accountable to external stakeholders, collaborating with suppliers and partners, and conducting experiments in ‘open innovation’. These are valuable things to do in their own right, but in addition they have the broader positive benefit that they help to keep the forces of entropy at bay. 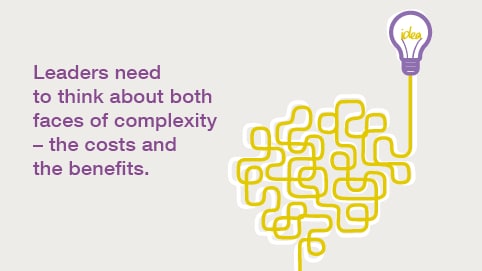 The bottom line is that managing complexity is a real art. It has to be tackled in a thoughtful and holistic way. Leaders need to think about both faces of complexity – the costs and the benefits. And they need to develop an understanding of the social dynamics through which it emerges.

Thanks Julian. It is good to see the positive case for complexity to balance the more often cited operational concept that simple is good. I would add the importance of transparency and measurement to your thinking on entropy. Humans enjoy creating complexity and left to their own devices will tend to make simple things more complex, whether this adds benefit or not to the whole. Transparency and measurement helps moderate this through peer pressure and self awareness.

Wonderful Facts. Unfortunately Many Organisations, irrespective of their sizes, experience these complexities which may largely be attributed to the delusions of their Leaders too, who believe that together with their Title comes the Crown of Authorities instead of Responsibilities.