European banks could be hit by Turkey-US row 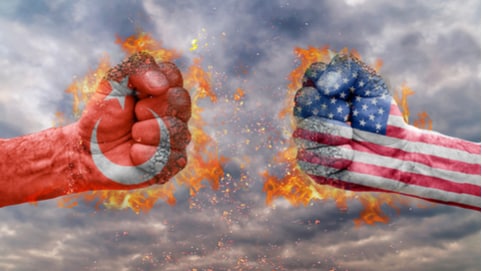 Turkey’s economic troubles amid its diplomatic dispute with the US could have a knock-on effect on European banks, according to Linda Yueh, Adjunct Professor of Economics at London Business School.

Speaking on BBC Radio 4, Yueh said there was also a risk to trade and investment involving the European Union (EU).

“To give you a sense of the severity of this crisis, there’s a chance it could impact European banks. About 40% of what Turkish companies owe is in foreign denominated currencies, so dollars and euros. The European Central Bank has highlighted some banks in Europe that are exposed after lending money to Turkey, such as BBVA of Spain, France’s BNP Paribas and UniCredit in Italy.

“British banks aren’t as exposed, it seems, but clearly any problems with Turkey – a country so close to the EU border and with lots of ties and trade and investment with Europe – will have an impact on not just the UK but also [Turkey’s] more immediate European neighbours.”

The Turkish lira has dropped nearly 50% against the US dollar in 2018, hitting a record low of 5.55 on 9 August, caused by tensions between Turkey and the US. Their dispute is over Turkey’s detention of American evangelical Pastor Andrew Brunson on terrorism charges, leading to US sanctions on two of President Recep Tayyip Erdogan’s ministers.

US President Donald Trump has vowed to double the rate of tariffs on steel and aluminium imports from Turkey. In response, Erdogan said Turkey will boycott all American-made electronic products.

Tensions with the US have added to investors’ fears about the fragile Turkish economy, according to Yueh. “Investors have lost a great deal of confidence. Erdogan has become more authoritarian and is exerting greater influence over the central bank, which is a key organ for maintaining financial stability,” she said.

“The Turkish economy really isn’t doing very well under this regime. The country has a massive trade deficit, buying more from the rest of the world than it sells, and it lacks the reserves to cover the difference. Investors look at that and say, ‘Hang on, we’re not sure you’re going to be able to manage the economy very well, so I’m going to start selling lira and pull some of my money out.’”

Yueh added that the dispute will further affect the Turkish lira. “A weakening currency makes imports more expensive and leads to inflation, which has hit 15% in Turkey. That’s five times higher than the official target.”

Typically, governments increase the interest rate to head off inflation. However, Erdogan feels doing so will hamper Turkey’s economic growth, which Yueh believes could lead to further inflationary pressures that deter investors. “You really don’t want to invest in a country with [such high] inflation,” she said.