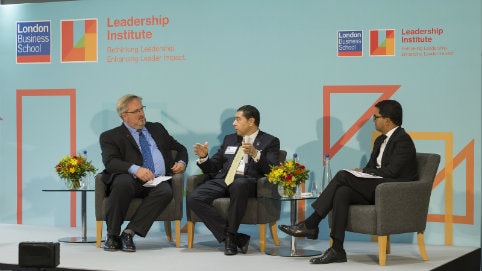 Hisham Ezz-El Arab, Chairman and Managing Director at the bank, told a London Business School (LBS) audience at a joint event with LBS’s Leadership Institute and the Wheeler Institute for Business and Development that the future of finance will be shaped by ABCD.

“A is artificial intelligence, B is blockchain, C is the cloud and D is data. Those combined, honestly with a little deregulation, will be the real revolution in the financial services industry,” he said.

Emerging markets are more innovative, he said, because they are less regulated compared with the developed world. “Look at the European market after the financial crash of 2008. Overregulation almost prohibited banks from lending money. As the market becomes less regulated, innovation will thrive.”

In 2011, at the height of the Arab Spring, the chairman, responsible for Egypt’s leading private sector bank, embarked on a major transformation programme. This placed people – customers, employees, shareholders – at the heart of its strategic operations.

CIB-Egypt has taken decisions, including setting up a data hub away from its headquarters in Cairo, to ensure it remains cutting-edge and better serves its customers. “We have taken transformational steps over the past years, moving from traditional banking to a service provider that fits with the requirements of the newer generation. Technology will play a critical role – it will pave the road for innovation,” said Ezz-El Arab.

The choice to invest in tough times paid off, he said. One marker of success came in July 2017, when CIB-Egypt was named the World's Best Bank in the Emerging Markets by Euromoney, a leading publication covering the growth of international finance.

Rajesh Chandy, Professor of Marketing and Academic Director, Wheeler Institute for Business and Development, pointed to the unfavourable opinions held about bankers. “In the developed world, a banker stereotype is often an unflattering one. In a context like in Egypt, financial services play a hugely crucial role. How can bankers help drive equality and opportunity?”

With low banking penetration and high mobile phone penetration, CIB-Egypt has an opportunity to tackle the pressing issue of financial inclusion, noted Ezz-El Arab. For instance, in a national drive towards a cashless society, the bank campaigned to bring in electronic payments using e-wallets.

Randall S Peterson, Professor of Organisational Behaviour and Academic Director, Leadership Institute, asked: “What are the challenges of working in a developing economy where there is political unrest, the value of the currency can just drop overnight, and where most of the population is unbanked?”

He spoke about other unique challenges in Egypt, involving a fragmented customer base. “People have savings with the post office, some people use cash, some have credit with microfinance – but to consolidate, this is the opportunity. This is what I mean by banking.”

Growing a sustainable business is high on the agenda, noted Ezz-El Arab.

“Unless your model is sustainable, I don’t call that success.”

He applies this philosophy to his leadership talent pipeline. “Success is to create something bigger that can grow further after you leave. I select leaders that are believers in the culture. You invest in people – the entire management group, first line, second line and even the third line. You hire the right people, and you create the right culture.”