Will my idea work? Passion. Conviction. Tenacity. Without these traits, few entrepreneurs could endure the challenges, setbacks and twists in the road that lie between their often path-breaking ideas – opportunities, as they call them – and the fulfilment of their entrepreneurial dreams. But the very best entrepreneurs possess something even more valuable: a willingness to wake up every morning and ask a simple question: “Why will or won’t this work?”


Aspiring entrepreneurs – whether contemplating a raw start-up or buried deep in the bowels of an established company – ask this question for a simple reason. They understand the odds. They know most business plans never raise money. They know most new ventures fail. Most of all, they don’t want to end up starting and running what long-time venture capitalist Bill Egan would call a “lousy business”, one that consumes years of their energy and effort, only to go nowhere in the end. Despite asking this crucial question every day, their passion remains undaunted. So committed are they to showing a reluctant world that their vision is feasible that they want to know why they might be wrong before bad things can happen.

If the entrepreneur can find flaws before they launch or before the flaws take down their new business, they can often work around them. They can modify their idea, shaping the opportunity to better fit the hotly competitive world in which it seeks to bear fruit. If the flaw they find appears to be truly fatal, they can abandon the idea before launch in some cases, or soon enough thereafter to avoid wasting months or years in pursuit of a dream that simply won’t fly.

Better yet, if after asking their daily question and probing, testing, and experimenting, the signs remain positive, they pursue their opportunity with renewed passion and conviction. This evidence translates to new-found confidence that the facts – not just intuition – confirms their prescience. Their idea really is an opportunity worth pursuing.

In today’s lean start-up world, the urge to launch right away and just learn as you go is appealing. It gets you out into the marketplace, which is the best place to learn. And it provides a release for your entrepreneurial energy that is probably bubbling over. But it’s all too likely to result in a waste of your entrepreneurial energy and talent. Why? As the 20th century’s most incisive management thinker Peter Drucker observed about new ventures, “If a new venture does succeed, more often than not it is:

“OK,” you might ask. “Is there a better way to go? There is, and there’s a framework to help entrepreneurs avoid missing the obvious pitfalls in their ventures, the seven domains.


An idea that worked

Consider this entrepreneurial story. In 2004, Paul and Alison Lindley were facing a bit of a challenge in getting their six-year-old daughter Ella to eat. In his Caversham kitchen, 40 miles west of London, Lindley concocted blends of natural and organic fruits and vegetables that were fun, colourful, and fitted the family’s on-the-go lifestyle. Realising that there might be a market for his tasty creations – which Ella loved – Lindley soon moved his lean start-up out of his kitchen and into a couple of barns nearby.

Before long, Ella’s Kitchen baby and toddler food pouches – filled with all-natural purées of organically grown fruits and vegetables – began finding their way into the homes of many British families with young children. Organic smoothies in four kid-friendly colourful favours – red, green, purple and yellow – followed, as did a range of toddler-sized fruit snack bars and a host of other products.

Lindley then expanded internationally; after all, eating should be fun, tasty, and cool for kids, and healthy, too, no matter where they live. Ella’s Kitchen was then acquired by Hain Celestial, a leading American marketer of natural foods and beverages, in 2013.

Was Lindley’s idea for Ella’s Kitchen an attractive opportunity? Opportunities are best understood in terms of three crucial elements: markets, industries, and the one or more key people that make up the entrepreneurial team. The seven domains model (see below), articulated in my book, The New Business Road Test: What Entrepreneurs and Executives Should Do Before Launching a Lean Start-Up, brings these elements together to offer a clearer way to answer the crucial question that aspiring entrepreneurs must ask themselves every morning: “Why will or won’t this work?”

The model offers a toolkit for assessing and shaping market opportunities and a better way for entrepreneurs to assess the adequacy of what they bring to the table as individuals and as a team. The model also outlines a customer-driven feasibility study to guide entrepreneurs’ assessments before they invest precious time and effort in writing a business plan. 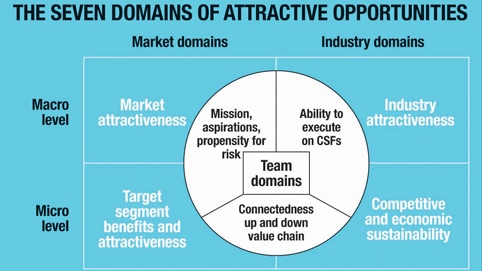 Let’s put the seven domains to use and examine Lindley’s opportunity.

As with many entrepreneurs, Lindley brought relevant skills to the table, skills he’d built at Nickelodeon, where he had been Deputy Managing Director of its UK business. Where there were gaps, he built a team that complemented his skills and brought connections the business would need. Hain Celestial thought so much of the team Lindley assembled that it kept them in charge post-acquisition and asked them to manage the company’s kids’ product line in America, too.

So, was Lindley’s entrepreneurial opportunity an attractive one? It wasn’t perfect, in seven domains terms. But they never are. Wisely, Lindley crafted a strategy that capitalised on his opportunity’s strengths in market terms, and mitigated the risks on the industry side.

Putting the seven domains to work

At first glance, the seven domains model simply summarises what everybody already knows – or claims to know – about assessing opportunities. Upon more careful scrutiny, however, the model goes further to highlight three crucial distinctions and observations that most entrepreneurs – not to mention many investors – overlook:

Moreover, the model’s seven domains are not equally important. Nor are they additive. A simple checklist won’t do. In fact, the wrong combinations of them can kill your venture. On the other hand, sufficient strength on some factors can mitigate weaknesses on others. Attractive opportunities – such as the one Lindley identified – can be found in less attractive industries such as prepared foods.

As the seven domains graphic shows, the model is comprised of four market and industry domains, including both macro and micro levels, and three additional domains related to the entrepreneurial team. These seven domains (everybody knows at least some of these, too, but I found most don’t think of them in this way) address the central elements in the assessment of any market opportunity:

Why won’t my idea work?

In examining your opportunity through the seven domains lens, concerns will inevitably crop up: the potentially fatal flaws that can render your opportunity a nonstarter. The key task in answering the question, “Why won’t my idea work?” is to find any major flaw that cannot be resolved, the opportunity’s Achilles’ heel. Thus, the crucial things to look for on the downside are elements of the market, industry, or team that simply cannot be fixed by shaping the opportunity in a different way.

If flaws that cannot be fixed are found, the best thing to do is to abandon the opportunity at this early stage and move on to something more attractive. Persisting with a fundamentally flawed opportunity is likely to have one of two outcomes, both of which are exceedingly unpleasant:

Some readers of this article may find themselves in this unhappy predicament today, and it’s not a pretty place to be.

Why will my idea work?

The good news is that opportunities are not static. They can be shaped in many ways. Potentially fatal flaws are sometimes fixable. You can choose a different target market that is more receptive to your proposed offering. The offering can be adapted to better fit market needs. The opportunity can be pursued at a different level in the value chain – as a distributor, rather than retailer or manufacturer, for example – if a different industry setting would be more hospitable. Adding individuals to help the team deliver on the critical success factors or who bring connections up, down, or across the value chain can strengthen the entrepreneurial team.

So, take heart. Road test your entrepreneurial dream before you even think about launching a lean start-up. If the seven domains road test looks positive, you will have jump-started your journey, and you will have gathered a body of evidence with which to guide your launch. And what if you’ve found fatal flaws? You can redirect your entrepreneurial time and talents to another opportunity with greater potential. Enjoy the drive!