What’s next for London?

Professor Julian Birkinshaw and others from the LBS community offer their views on the UK capital.

Rosie Parry
Save to my profile

What will London look like in 2022 and beyond? With the latest set of Covid-19 restrictions beginning to lift and the city opening back up after another fraught festive period, many in the capital have reason to feel optimistic. Still, questions remain about the long-term effects of the pandemic, and post-Brexit London’s ability to compete with the likes of Paris and other international rivals.

Professor Birkinshaw is clear that London is still reeling from the effects of Brexit. “Of course, Brexit has not been the best thing for the city. All the evidence still suggests that leaving the European Union has been bad for London at least in an economic sense, as it has for the rest of the UK.” Moreover, “It used to be the case that London was a gateway to Europe – and this was how the city marketed itself to the international business world. Obviously, that argument is now much harder to make,” he says.

As things stand, nobody is quite sure what London’s relationship with the rest of the world will look like beyond the near future. That said, Professor Birkinshaw feels that rumours that London could become a centre of sweeping liberalisation are somewhat exaggerated. “There’s been a lot of talk about how London could become a kind of Singapore-on-Thames, a haven of deregulation and low taxation. To be frank, I believe the current government would struggle to achieve this without losing support in the North of the country.”

Fears that Brexit would permanently destroy the city’s status as Europe’s financial capital also seem to have been excessive. “Look at what’s happened with banking jobs”, Professor Birkinshaw points out. “Nowhere near as many banking jobs have left London as we thought might. Yes, it’s happening on the margins – and certain types of capital are shifting out of the city – but in terms of the people who make decisions about that capital, they are staying put. London has maintained a very strong position in that regard.”

“Not only is the city managing to retain its status as a financial capital, it’s evolving to meet new demands and welcome new industries.”

Plus, the city has become a hub for tech firms and start-ups

Not only does London’s position as a financial capital remain strong; the city continues to attract new and rapidly evolving sectors. Today, London is home to over 30 ‘unicorn’ startups – startups that have secured valuations of over $1 billion – and boasts the third highest level of tech VC investment in the world, after hitting a record high of $15bn in 2020.

“If you look at where the venture capital money is flowing, particularly in fintech and related areas, London is undoubtedly still the biggest magnet,” Professor Birkinshaw says. “So not only is the city managing to retain its status as a financial capital, it’s evolving to meet new demands and welcome new industries.”

Is Professor Birkinshaw worried that, as the details of the UK’s post-Brexit relationship with Europe and the rest of the world are finalised, London will find itself in a weaker position in the long term? “On one hand, there certainly are some problems have that been kicked down the road a little bit. It’s not unreasonable to assume we may experience setbacks due to further trade restrictions or a breakdown in relationships with Europe.” That said, he does not believe these issues will pose a serious threat to the city’s global standing. “Even with these negatives, London will remain an important centre for global business. After all, it takes a lot to make a person or organisation actually get up and leave.”

“London continues to be one of the best places in the world to build a diverse network and to work on cross-industry issues”.

This is partly due to London’s unique position as both a centre of trade and business and a global cultural capital. For all the draw of the City and Canary Wharf, there’s also Westminster, Soho and the West End. Londoners not only have their pick of jobs, but the ability to spend their free time in one of the city’s 857 art galleries, Shakespeare’s Globe or the world-famous Natural History museum. There are even four UNESCO world heritage sites: Tower of London, Maritime Greenwich, Westminster Palace and Kew’s Royal Botanic Gardens.

Professor Birkinshaw believes this variety will remain a key differentiator for the city. “In other parts of the world, banking, commerce, arts, culture and government will be spread out in different cities across a single country. London is special: it’s a true nexus, where all these key sectors can come together.” As well as making London an extremely desirable place to live, this offers businesses improved proximity to other industries, which can be key to success. “Proximity enables efficiency. London continues to be one of the best places in the world to build a diverse network and to work on cross-industry issues”.

"This is a city that’s been reinventing for the last 300 years and will continue to do so.”

Better days are ahead

Overall, Professor Birkinshaw is hopeful about London’s future. “Obviously, as a tourist destination, London remains weak right now. That’s the case for everywhere, the pandemic has been devastating for everyone.” But, as the labour market continues to recover, the city does too. He acknowledges there will be an adjustment period, as the economy continues to adapt to an increase in remote working and many former office spaces go up for sale. “There are likely to be rapid physical changes to the city, in terms of where organisations are based and how much space they’re buying up. Obviously, we need to think about how that space will be used.”

This might sound daunting, but Professor Birkinshaw feels London is up to the challenge. “There’s no doubt London is going through a transitional period right now. But we need to remember, this is a city that’s been reinventing for the last 2000 years and will continue to do so.” 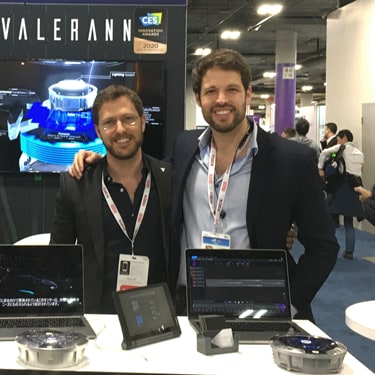 I didn’t come to London for the entrepreneurial opportunities but that’s definitely why I stayed. I grew up in Israel, where most people who leave for business schools tend to head to the US. But then I met my wife, who is British, while we were both working at BCG. I knew I wanted to be with her, and once I started looking at European business schools, LBS felt like the natural choice.

The diversity in London, both in terms of its population and its offerings, is unparalleled. Israel is incredible and a great place to start a business, but there’s a feeling of endless possibility in London that not many other cities have.

I started Valerann during my MBA. Our mission is to empower road network operators through enhanced use of date. We want to assist in saving lives, reducing congestion, decreasing emissions and support Connected and Autonomous Vehicles (CAVs). We actually raised our $800,000 pre-seed funding between the first and second year of the programme. Starting a business while studying was intense but being at LBS also allowed me to experiment in a relatively risk-free environment. The first few years of launching any organisation are so hard, I don’t know if we’d have been able to survive if I was working as well.

LBS also gave me an invaluable network. I’d be walking around campus and someone would come up to me and offer to connect us with one of their contacts, without me ever having to ask. I quickly found that, though alumni contacts, we could reach a key decision-maker in almost any organisation.

Even if I hadn’t been studying here, London was the ideal place to launch Valerann. It’s easy to forget, but organisations like Transport for London and Highways England are actually some of the most avant-garde road organisations in the world. The level of innovation here is amazing, which means we get to serve some really interesting clients.

When I’m not working, I love just walking around the city. Sometimes we’ll do a ten-mile loop through various neighbourhoods. London is made up of so many unique places, you can discover areas that are completely different to where you live. My wife and I both love checking out the food markets too. The diversity of the food here is unmatched – even places like New York and Singapore can’t beat it.

We actually live on the same street as my best friend from LBS. I found the second year of my time at LBS was really key for building relationships. The first year, everyone’s excited and trying so many different things, but it’s in the second year that you start to form those lasting bonds. It’s another reason why a two-year MBA is worth the investment. For me, it meant leaving LBS with friends for life, as well as a professional network.

I actually grew up in north London, in Islington. I moved to Birmingham for my undergrad because I knew I wanted to be in a big city but wanted to experience living somewhere independently, without my family down the road. I did like Birmingham and stayed there after graduating, but nowhere in the UK really compares to London and so I came back 2 years after graduating.

I chose to do an MBA in London because I knew this was ultimately where I wanted to work. With London being the epicentre of so many different industries, the career prospects here are just that bit broader. Given I knew I would be working here, it made sense to me that I should build a network here. London’s diversity was also important to me. Birmingham might be a big city, but it’s nowhere near as diverse. I’ll give you an example, while I was working in Birmingham, I was the only Black woman in my team. That wasn’t the case when I switched to the London office.

I’m five months into my MBA now. It’s going by so fast, which is scary but I’m absolutely loving it. Everyone here is so impressive and brings their own unique outlook – whether that’s because of their personal experience, where they’re from, or their time in industry. I feel like I’m building a very powerful network.

On the weekend, I like to head to somewhere like Shoreditch to see friends and eat. I love Shoreditch in particular because of the creative feel. Even the way people dress is expressive. I’m also a fan of the huge range of fitness classes, like SoulCycle  and Barry’s Bootcamp. Even if I don’t have plans, I love knowing that there are so many options open to me. With so many events and exhibitions and places to explore, there’s always something to do.

How far will an MBA take you?

As the war for talent heats up, what do you need to get ahead of the rest?