What are you saving by saving face?

Gabrielle Adams and Anna Johnston
Psychology
Save to my profile 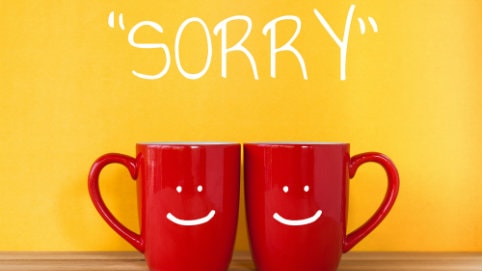 An apology is not just an apology. “Sorry” comes in many forms.

Mitsubishi bosses have apologised following the revelation that the carmaker falsified its fuel economy data. The incorrect tests involved 157,000 of its cars and 468,000 Nissans. The government, which has raided offices and demanded a report within the week, says that Mitsubishi has broken the trust of consumers.

“We believe this manipulation was deliberate,” said Tetsuro Aikawa, President of Mitsubishi Motors, who apologised for the cheating with the traditional Japanese bow in front of the world’s media.

Shares in Mitsubishi fell 15% on the day the news broke. Mitsubishi’s problems follow the Volkswagen cheatware emissions scandal, and could prompt a tightening of regulation for carmakers, globally.

Mitsubishi’s leaders are not alone in feeling heat from the glare of a public apology. Apologising for a corporate disaster is not enough if it’s deemed insincere. Former BP chief executive Tony Hayward discovered this in May 2010. Hayward was criticised for lacking remorse when speaking about the drilling platform explosion off the coast of Louisiana, which killed 11 people and caused one of the worst environmental disasters in US history.

In a statement to the families affected, Hayward said: "We're sorry for the massive disruption it's caused their lives. There's no one who wants this over more than I do. I would like my life back."

But was the PR faux pas solely the result of poorly selected language? Certainly, it lacked authenticity. The study ‘Saving face? When emotion displays during public apologies mitigate damage to organisational performance’ shows that language is just one component of an apology. How someone delivers that apology is also as important as what apologisers say.

The research, co-authored by Gabrielle Adams, Assistant Professor of Organisational Behaviour at London Business School, found that organisations need to consider the nonverbal behaviour of their apologetic representatives. Delivering a poor apology can damage the company’s reputation and prompt investors to question their association with the business, according to the study, which was published in Organisational Behaviour and Human Decision Processes. If company representatives get the apology wrong, it is an error subject to scrutiny by investors.

Dr Adams gives her tips on delivering an authentic apology.

1. Choose senior spokespeople with the ability to apologise sincerely.
2. Choose to acknowledge the wrongdoing and to accept responsibility for it. Saying “I’m sorry” and accepting responsibility may lead to smaller losses than the absence of this expression.
3. Communicate your sympathy for those who have been harmed or who have suffered, and do what you can to make it right.

Mitsubishi's announcement follows VW’s emissions scandal in 2015. The German car giant saw shares plunge by 30% after its corporate humiliation. Before stepping down, CEO Martin Winterkorn was snapped by photographers with his head in his hands when making a public apology. Winterkorn’s gesture was seen by many as a candid display of regret.

TalkTalk’s chief executive Dido Harding said she was “very sorry" after personal details of up to four million customers were accessed by hackers in a major cyber-attack. Her face matched her apologetic tone. Elsewhere, Hisao Tanaka seemed genuinely sad when resigning as CEO of Toshiba in front of the world’s media. He appeared truly sorry for the company overstating its operating profit by US$1.22 billion.

There are hundreds of examples of similarly meaningful apologies. But in the wake of a company scandal or crisis, how does the expression and perceived emotion of the person apologising, affect investors’ perceptions?

"Our research shows that chief executives who demonstrate happiness in their facial expressions when apologising were less able to restore confidence and did not their companies on an even financial trajectory," says Dr Adams. “In our analysis of the market effects of apologies for corporate wrongdoing, deviant (happiness) was worse for for company performance than normative (sadness) facial expressions.”

“Chief executives who say they are sorry but fail to show sadness in their faces find their financial bottom line adversely affected for as long as three months after the apology," Dr Adams says.

The study found that a delivery that exhibited happiness was linked to decreased investor confidence, leading to negative stock market returns and that adverse financial effects persisted for up to three months. The effect was attenuated if an executive with less responsibility (someone besides the CEO), delivered the apology.

So why does nonverbal expression have such an impact? Smiling is interpreted by third parties as a sign of insincerity, which reduces their confidence in the company representative and the business itself. Moreover, shareholders who perceive spokespeople to be insincere may think twice about supporting the organisation and could sell off their shares after a transgression. But, Dr Adams says, “Sincerity might buffer organisations from the financial fallout of a transgression, discouraging shareholders from selling their stock, despite the wrongdoing.”

Sorry at the top

Organisations do well when they select emotionally intelligent senior executives to apologise for transgressions, says Dr Adams. “Apologising well matters – and if you're the chief executive, it is critical.”

She adds that investors care whether the CEO truly looks sorry. When discussing “upper face happiness”, Dr Adams says that radiating warmth and showing off your crinkled crow’s feet could be harmful to the organisation when you are the boss. Further, top executives considered to be too cheerful when apologising could have a greater adverse effect on the organisation’s performance. “When CEOs delivered apologies while expressing happiness, their companies performed worse than when lower-status company representatives did the same,” she says.

A half-hearted apology from the CEO can have a knock-on effect that goes beyond losing customers. Employees and stakeholders may doubt the trustworthiness of the chief executive. Moreover, regulators could take a tougher line on businesses embroiled in a corporate scandal or industry crisis – a trend borne out in banking, which has faced far greater scrutiny from regulators since the onset of the 2008 global economic crisis.

As history has shown, a corporate apology is never enough. Businesses that hope to repair their tarnished reputation have to choose a senior executive to say sorry in a meaningful way. Get it right and the fallout may be short-lived. But companies trying too hard to save face could see shares crash for months to come.