Books to fuel your career

Titles to provoke, delight and inspire you to greater heights – as recommended by London Business School experts 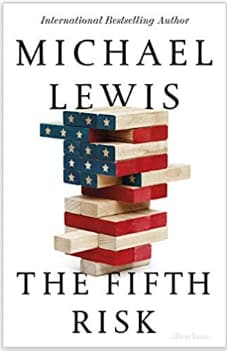 I find career inspiration in many books, from historical novels such as Hilary Mantel’s Wolf Hall trilogy – charting the career of Thomas Cromwell, who rose from being the son of a Putney blacksmith to become Lord Privy Seal and trusted counsel to Henry VIII – to topical non-fiction books such as Michael Lewis’ The Fifth Risk, which is full of real-life characters who had impactful careers serving in US government agencies.

Why is this? Well, a really good book is invariably about interesting people and the legacies they leave.

One book that has really made me think hard about career ambition is Red Notice, supposedly a political thriller but actually an autobiography of sorts. This is the story of Stanford Business School graduate Bill Browder, who had a varied career in consulting and finance, culminating in setting up and running a successful investment fund in Russia.

Inevitably, he falls foul of the vested interests of the country’s emerging capitalism, which leads to tragic consequences for his tax lawyer, Sergei Magnitsky, who is arrested and imprisoned and dies of alleged mistreatment. Browder gives up everything to fight for justice for his friend, leading to Barack Obama and the US government passing the Magnitsky Act, a law punishing Russian human rights violators.

Whatever your view of the controversial and abhorrent aspects of this tale, it can teach you many things about your career journey. Wherever you start and aim to go, you’re likely to finish somewhere very different. However hard you try to steer a course, your path will be shaped by events that are beyond your control and your legacy, whether good or bad, will be determined by your ability to negotiate the obstacles that will stand in your way.

Acting with Power: Why We Are More Powerful Than We Believe by Deborah Gruenfeld 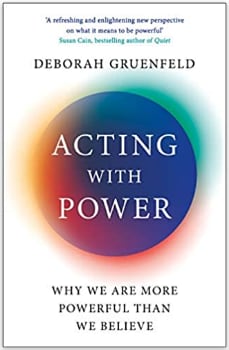 Looking for a hopeful, refreshing message underpinned by great stories and top-notch social science? It’s right there on the book jacket of Deborah Gruenfeld’s Acting with Power: Why We Are More Powerful Than We Believe.

Gruenfeld should know. A highly regarded expert on power and how to use it, she is a social psychologist and professor of organisational behaviour at Stanford University, where she has taught an oversubscribed course that shares the book’s title for over a decade.

Gruenfeld shows us how power is bound up with performance and each chapter guides the reader to consider their own performance and coaches on how to deliver it best. When should I play up my power or play it down? How can I play it up, if that’s what I need to do? How can I get into character? How can I tamp down the fright that comes before I walk onto the “stage”?

Acting with Power reminds us of the power we hold and is an essential guide for what works and what does not if you want to put it to use. Chock-full of stories and examples, Gruenfeld’s engaging writing makes this a surprisingly good choice right now.

The Art of Statistics: Learning from Data by David Spiegelhalter

Recommended by: Nicos Savva, Professor of Management Science and Operations If you want to make well-informed decisions in your career, you need to be able to make sense of the numbers.

The Art of Statistics is a beautifully written and accessible introduction to the power of statistics by a widely cited and highly influential Cambridge University statistician. It’s full of lively examples that show how statistics (and data) can transform our understanding of the world around us – if they are interpreted correctly.

It unpacks the difference between correlation and causation, asking questions such as: How many sexual partners have people in the UK really had? What is the risk of cancer from bacon sandwiches? Do busier hospitals have higher survival rates?

One study conducted on more than four million Swedish men and women whose tax and health records were linked over 18 years enabled researchers to report that men with a higher socioeconomic position had a slightly increased rate of being diagnosed with a brain tumour. Why? Because wealthy people with higher education are more likely to be diagnosed and get their tumour registered – an example of ascertainment bias, not cause and effect.

Non-mathematicians should read this book to make more sense of the numbers and gain a better idea of which statements to trust and which to take with a pinch of salt. For people who are highly numerate, it’s an enjoyable reminder of why we do what we do.

Your Brain at Work: Strategies for Overcoming Distraction, Regaining Focus, and Working Smarter All Day Long by David Rock 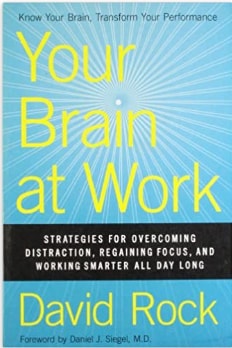 Your Brain at Work takes neuroscience research and applies it to the workplace, offering useful new practices and strategies that will help you in and outside of work.

Rock uses anecdotes based on two characters, Emily and Paul, parents of two young children. Emily is the newly promoted VP of marketing at a large corporation, while Paul works from home or from clients’ offices as an independent IT consultant. Their lives are filled with a blizzard of emails, phone calls, meetings, projects, proposals and plans. Dr Rock takes us inside Emily and Paul’s brains as they attempt to cope with all the information they’re presented with, prioritise it, and act on it.

This is a great book for anyone who would like their working life to be more energising and less exhausting. Best of all, it will make you smile.

Why Nations Fail: The Origins of Power, Prosperity, and Poverty by Daron Acemoglu and James A Robinson 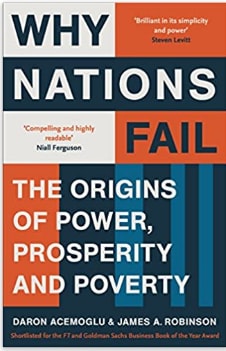 This is a book that will provoke you to think harder about the world as it is now and the world you want to create as a future leader. It sets out to answer the question: Why are some nations poor while others are rich?

The authors – leading economists with a profound understanding of history – claim that the reasons for wealth disparity are not, as is often assumed, climate, geography or culture. Rather, they argue, a country’s prosperity or poverty can all be traced to the quality of its institutions.

Drawing on examples from ancient Rome to present-day China, they amass and assess evidence to show that prosperity requires sound institutions that enable innovation, expansion and peace. Synthesising and exploring both well-known theories and empirical research, the authors conclude that authoritarian, “extractive” institutions will always eventually run out of steam, while inclusive institutions enable sustainable growth.

Only a truly free society can foster genuine innovation and creative destruction, they conclude, and prosperity is possible if humans choose to wield their power wisely and for the greater good.

6 ways to prepare for what's next

The new working world: what comes next?

Essential insights to help you navigate the new working world, brought to you by LBS faculty, alumni and our student community.