The UK general election on May 7 promises to be one of the closest in decades.

Fay Copeland
Marketing
Save to my profile

The business world plays a central role in any modern election.  Business leaders canvas for their parties of choice.  Some are substantial party donors.  Others watch with eager interest to see how they will be impacted by the various policies on taxation and more offered by the individual parties.

And, as we watch the endless campaigning, many business disciplines are being put to work – from strategy to marketing by way of behavioural economics.  Most obviously, there is leadership.  Politics is a crucible for leaders.  Every word they utter, every move, is put under the spotlight.  Then there is psychology. What will persuade people to vote for a particular party?  What will encourage people to vote at all?  Marketing is also a key factor.  It has long been recognised that political campaigns and commercial promotional campaigns have much in common.  But the 2015 UK general election is about more than which ‘brand’ is most preferred – fundamental strategic changes are under way, and strategic marketing thinking about market evolution can shed light on the changes taking place. .

To emphasise the importance of marketing and to prove that marketing can generate strategies in response to virtually any situation, a group of students on London Business School’s Sloan Programme examined how marketing could be used by the UK’s Liberal Democratic Party to improve its performance in the election.

There is work to be done. The LibDems are presently a partner in the UK’s coalition government, together with the Conservative Party.  It is anticipated that the LibDems, who have lost significant support since the 2010 election which brought them into government, will lose many of their parliamentary seats, their position as the UK’s third largest political party and, most significantly, any role in the formation of a potential coalition government on 8 May.

“First, the research demonstrates the power of market fragmentation.  Markets fragment over time as consumers become more familiar with the products and clearer about what they want.  The paper quotes research which suggests that, contrary to popular wisdom, people are more engaged than apathetic, and will vote on issues rather than class.  The old tribal duopoly is eroding, and niche disruptors including UKIP, the Greens and the SNP are picking off emerging segments,” says Professor Arnold.

The fragmentation can be traced back to the growing success of the LibDems, traditionally the third party, over recent elections. “In particular, the 1997 General Election marked something of a turning point for the LibDems, when they won 46 parliamentary seats, the most for any third party since 1929.  Successes continued through the 2001, 2005 and 2010 General Elections,” says the report.  The trouble for the LibDems is that their success has been part of a more profound political fragmentation.

The second marketing point illustrated by the research is market polarisation.  Explains David Arnold: “In many markets, the premium and discount ends of the market are strong but the middle is shrinking.  There is a similar situation in UK politics – the LibDem position of being ‘none of the above’ is weakening.  Again, this runs contrary to popular wisdom, which is that elections are won in the middle.”

The LibDems have traditionally won support from voters unimpressed or disillusioned with what the two main parties had to offer.  “Without any significant credible alternative there was little more than marginal support for other parties. The LibDems picked up significant support from voters willing to use their vote to protest against the two main parties. The LibDems capitalised on this, positioning themselves as the centre party, the fair party, the party which could be relied on to restrain the more left or right wing policies of whichever party got into government. Being centre ground in terms of their politics, they enjoyed the freedom of picking policies which they saw as ‘fair’ and selecting policies which were close to the Conservatives on some items and Labour on others, to fit their values, as well as emphasising their concerns for the local community to expand their grass-roots support,” say the student team.

Now, the political landscape is increasingly crowded. The student research traces the development of new segments in the election marketplace of 48 million eligible voters.  Protest voters have morphed into single-issue niches which have been picked off by disruptors -- UKIP captures the anti-immigration segment, the Scottish National Party dominates the regional identity segment, while the Green Party has the environmental segment.

“The political landscape has changed significantly over the last five years as certain of the smaller parties have gained popular support and had success at the polls. UKIP now has two MPs in parliament, capitalising on a growing wave of discontent over immigration and the UK’s position in Europe. The SNP’s support grew following the Scottish Referendum in 2014. Both are benefitting from a surge in national identity.  The Green Party continues to build support from an increasing number of voters concerned about issues which impact on the environment.  It is now estimated that between one quarter and one third of voters will vote for one of the “other” parties (i.e. a party other than Labour, Conservatives or LibDems) on 7 May,” report the researchers.

A final element in the election’s marketing mix is disintermediation.  Digital media has undermined the stranglehold of the two traditionally dominant parties on the media.  Everyone now gets a voice – even if this makes for crowded stages on TV debates.  Access to the media is likely to promote local activism (such as in Scotland) so that it becomes more influential, and new disruptors to emerge over the years to come.


All of this leaves the LibDems languishing.  The research observes that the LibDem brand has been damaged in the following ways: LibDems are no longer perceived as the credible alternative; they are being challenged by “the other parties”; have no clear identity or story at national level; and their leader, Nick Clegg, is perceived to be ineffective. Little wonder perhaps that, says the research, “senior LibDem figures fear that the party may lose as many as 22 to 27 of its 57 seats on 7 May”.

In response, the challenge for the LibDems, suggests the research, is to put marketing to work.

“The market dynamics are complex due to the segmentation of the voters (loyal, switchers, floating, first-time and non-voting) coupled with the wide variation in age, income, education and geographic location of the voters within those segments, which will also affect what motivates voters to vote (if at all). Each of these factors will have an impact on how each voter collects information and decides how to vote.  This in turn must influence how the LibDem message needs to be communicated and delivered to them since advocacy of policies and achievements is important to secure support, trust, and sharing values,” say the London Business School students.

Using marketing’s 4 Ps of product, price, place and promotion, the students suggest the LibDems can improve their brand at national level by demonstrating their value proposition (differentiation in marketing-speak). At constituency level, the party must identify the voters (customers) that the candidates will target. Figure 1 shows which of the 4Ps will be engaged at each stage. 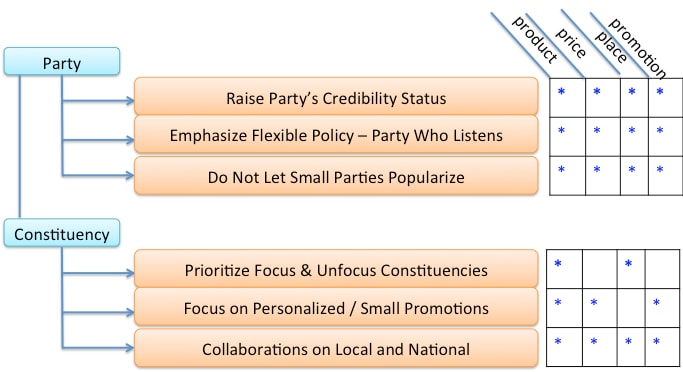 In terms of their value proposition, the research suggests the LibDems should:

In terms of targeting, the research suggests the LibDems must prioritise and focus on certain constituencies: “With resources (financial, time and human) being limited, a concentrated plan to target select constituencies (instead of all 650) will help LibDems focus their efforts more efficiently (and move focus away from others). A concentrated plan will yield a higher ratio of collaborators/resources to constituencies which, if the constituencies are selected carefully, will be more impactful.  LibDems need to win at least 42-45 seats to achieve the stated goals. The strategy should be to concentrate on 57 constituencies where they can best address the target voters’ needs:

Professor David Arnold observes that the validity of this study is enhanced by the fact that these shifts in market structure are being observed to varying extents in several countries.  “The Sloan team have demonstrated the power of marketing thinking in understanding a wider range of non-commercial contexts.”