Why do firms react so differently to environmental, social and governance pressures?

A manager of a fictitious insurance firm we’ll call SureIn is overseeing the response to an environmental demand. She’s expected to make a call in the next two weeks: either take action or don’t. Her options are to prioritise the issue and mobilise resources or brush the demand under the corporate carpet.

As responsible business practices become more attractive, so does the term “greenwashing”– when organisations inject effort into appearing more environmentally and socially responsible than they really are. If faux corporate social responsibility (CSR), which misleads employees, consumers and investors, sits at one end of the scale, pioneering organisations that push the boundaries of what’s possible sit at the other. But thinking in extreme either-or terms disregards vital questions. How does the manager of, say, SureIn weigh up the costs and benefits of responding to risks? And are her choices limited to taking full action or none at all?

Ioannis Ioannou, Associate Professor of Strategy and Entrepreneurship at London Business School, in collaboration with Rodolphe Durand (HEC Paris) and Olga Hawn (University of North Carolina) set out to answer these questions. Their paper, ‘Willing and Able: A General Model of Organizational Responses to Normative Pressures’, provides a nifty tool to help decision-makers choose from a menu of options.

“The idea that companies either greenwash, ‘decouple’ in academic terms, or take pioneering action is too simple,” says Dr Ioannou. “We’ve designed a conceptual model that applies to any ‘normative’ – environmental, social, governance and ethical – pressure. As a result, firms can choose to respond to different circumstances with a range of options.”


Are you willing? Are you able?


To understand what makes some firms respond appropriately to issues, such as climate change or diversity and inclusion, and others less so, Dr Ioannou and his co-authors agreed on the first metric: ‘issue salience’. In other words, is it important from the firm’s point of view?

“As a manager, ask: ‘Does this issue resonate with my firm?’ You need to understand if it’s important to the core of the business before doing anything about it.” How the top executive team perceives of the identity of the company is an important cognitive process, he notes.

Once senior executives have assessed the salience of the issue they should move on to cost-benefit analysis, according to the model. This was the missing piece of the puzzle from previous research, notes Dr Ioannou.

“We wanted to close the gap between what's important to the firm and what it can do. We suggest doing so by evaluating the costs and benefits of acting or not acting in response to a particular normative pressure.” So managers can use the tool to drive their decisions as well as analyse their ability to respond to multiple issues. It also offers insight as to why competitors react to similar demands in divergent ways. What does this mean in practice? 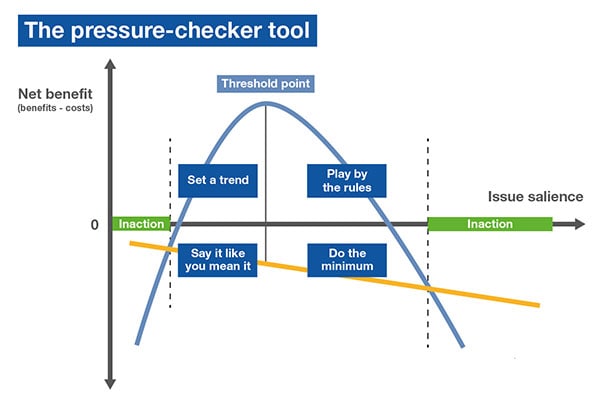 When interpreting an issue’s salience as close to zero, managers are likely to rate the cost of mobilising resources to address an issue as high. After all, why would SureIn’s manager commit time, people and money to something deemed trivial? At the same time, decision-makers are likely to view the expected gains as insignificant. Low salience, high cost, low benefit. In reverse, when the issue is viewed as an important expression of the firm’s core values and purpose, managers are likely to rate it as strategically important. Here the apparent costs increase but are still lower than the benefits.

There is, however, a threshold point (see diagram). Take SureIn and its response to climate change. Let’s assume that caring about the environment is part of the insurance firm’s identity. Allocating resources to the issue may yield significant benefits, so the firm weaves climate change into its strategy. Now that the issue is a priority, the company allocates more resources, diverting them away from perhaps other long-term risks. Ploughing time, technology and talent into one initiative could have a negative impact on SureIn’s ability to meet other demands, generating higher costs in the eyes of the manager. So at some point, the cost of addressing climate change may outweigh the benefit.

What’s more, some issues are so rampant, such as global warming, that they are beyond the reach of one single firm. In an interview with the Guardian in 2012, Unilever’s CEO Paul Polman warned: “The issues we face are so big and the targets are so challenging that we cannot do it alone […] When you look at any issue, such as food or water scarcity, it is very clear that no individual institution, government or company can provide the solution.”

If this is the case, what can managers do? Notice five potential responses ranging from inaction to substantive conformity on the pressure-checker tool. Managers can select from this menu.

“With our model, managers can consider the costs and benefits of inaction,” explains Dr Ioannou. Consider Apple’s refusal in 2016 to cooperate with a US government order to unlock an iPhone used by Syed Farook, one of the two shooters in the San Bernardino attack. Apple’s boss Tim Cook said in an email to employees: “This case is about much more than a single phone or a single investigation, so when we received the government’s order we knew we had to speak out.” Here, says Dr Ioannou, “inaction represented a social gain for Apple at a relatively low cost”. If the code-cracking system had ended up in the wrong hands it could have undermined security designed to protect Apple’s customers.

On the flipside, inaction can be detrimental. Dr Ioannou’s co-author Durand takes the Google memo to explain: “If a company publicly supports employees who declare that male programmers are better than their female counterparts, consumers will object. Some will lose trust in the firm. Before this scandal, the firm was inactive, ignoring its social responsibility towards gender diversity and it saw no ill effects. However, with heightened consumer awareness, the saliency of this issue is increased for decision-makers.”

Substantive conformity is a viable option for companies that are ahead of their time and willing to make deep-seated changes to their business practices. “Leaders perceive the benefit of taking action as growing so they are willing to action beyond compliance,” says Dr Ioannou. Such firms actively set a trend and adapt to emerging social influences – they push the boundaries of what is possible.

Starbucks CEO Howard Schultz, who publicly supported same-sex marriage in 2013 before the Supreme Court ruled it legal in 2016, offers an example. Dr Ioannou says: “Diversity is intrinsic to the company’s purpose. So when a shareholder complained at an annual meeting that the company had lost customers because of its support for same-sex marriage, Schultz responded: ‘It is not an economic decision to me… We employ over 200,000 people in this company, and we want to embrace diversity. Of all kinds’.”

3. Play by the rules – substantive compliance

The choice of substantive compliance is for firms willing to adhere to laws and regulations in a significant way. Here, the net benefit of action is still positive but diminishing (beyond the threshold point). In other words, the costs mount faster than the benefits.

Climate change, to a firm such as SureIn, is a big risk. For instance, it makes natural disasters more frequent and more intense according to the latest scientific studies. Hiscox, an insurer on the Lloyd’s of London insurance market, put the cost of the insured damage of hurricanes Harvey and Irma at US$50 billion (£38 billion). “But even within the insurance industry, different companies may interpret the salience of climate change differently,” says Dr Ioannou. “Some insurance firms that require the incorporation of climate change risks into their overall risk calculations will substantively comply, but will not go beyond what is required.”

Firms that see the costs of mobilising resources as greater than the benefits can choose symbolic conformity. “The issue is salient and growing but costs overshadow the benefits. To alleviate pressures, firms can use less expensive resources, portraying themselves as good citizens.” For instance, imagine that a competitor of SureIn, called InSuro, publicly declares to incorporate climate change risk in risk-assessment models. Or perhaps the firm becomes a signatory to sustainability or sustainable investing principles, incurring no cost.

Here, managers have a choice to take action, but critically, they may not push for fundamental changes to their organisational processes and structures.

5. Do the minimum – symbolic compliance

A manager here may perceive the benefits of action as low (and diminishing) and can choose to send a signal that adheres to regulations: symbolic compliance. “There is no expectation that the firm will benefit from action, therefore it will pretend to respect the rules and laws,” says Dr Ioannou.

Consider InSuro, which views climate change as a moderate risk. In response to a new regulation that requires an increase in the asset reserves to back up risks, InSuro simply renames its existing assets and, on the surface, complies with the new rule.


Through their research, the co-authors identified several levers that both business leaders and policymakers can activate to reduce the costs and amplify the benefits of taking effective action: organisational agility is one.

Nimble-footed firms with the dynamic capability to move at pace do better, says Dr Ioannou. “Agile firms enjoy a broader range of options in their response to stakeholder pressures and are better positioned to mobilise resources. Such organisations face fewer costs and enjoy potentially higher benefits.”

It can also serve firms facing multiple demands, he explains. “The model can help top teams evaluate issue salience and consider how to allocate resources. The model provides a robust set of choices, and thus boosts leaders’ decision-making abilities.” In other words, it’s a versatile tool.

By focusing on the willingness and ability of organisations to respond to pressures, firms can answer: what’s important and what’s possible? Further, corporate leaders can respond with mastery and meaning.

Associate Professor of Strategy and Entrepreneurship