Companies that innovate tend to prosper. Yet the process used by the most innovative firms remains a mystery. Is there a way that any ...

Kiriti Rambhatla
Strategy and entrepreneurship
Save to my profile

Companies that innovate tend to prosper. Yet the process used by the most innovative firms remains a mystery. Is there a way that any company can discern whether to commit resources to an innovation idea? Kiriti Rambhatla has blended the fields of science and management and offers a new way of thinking about innovation inside any company. Any business owner knows innovation is king in product development. A firm’s ability to innovate plays a significant role in determining its market scope and strength. Any process for innovating, however, involves risk — and can be quite costly. Wouldn’t it be great if managers could quantify (with accuracy) the return on investment for a possible new product when it is still an idea? That has been my quest: to determine how firms can weigh the risk and calculate the return on an investment in innovation.

Every firm strives to be as innovative as Intel, Apple and Google, to name three obvious examples. Each of these companies, of course, has its own proprietary methods for innovating. To come up with a way for many more companies to innovate with efficiency and payoff, I have been trying to understand the nature of innovative ideas. If an idea could be weighed before a company invests heavily in developing the idea into prototypes, test models and the like, the chances of developing commercial winners at low cost would improve dramatically.


As a scientist searching for a flexible model for testing innovation ideas, I saw possibilities in thinking about a water molecule. Such molecules contain hydrogen and oxygen atoms, and both are needed to make water. That offers a new way to think about innovation; if we name the atoms ‘time’ and effort’, it can give a better index and picture of the amount of time and effort that has been used or will be needed to make a business model out of a creative idea. I imagined quantifying the ideas generated during customary brainstorming sessions and classifying them with weight values — much as the positive and negative charges of molecules combine to create H2O.

By converting ideas into numbers and assigning an innovation quotient (IQ) score to each idea, I then plotted this score to a new model of innovation labelled ‘The Strategic Innovation Cube’. 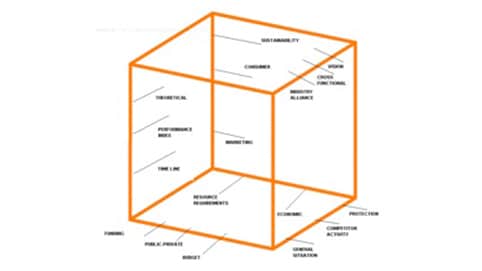 My six-sided cube filters an innovation idea by measuring its ‘charge’ in terms of basic business measures such as competition, funding parameters, marketing requirements and sustainability.

I also devised a formula that allows companies to construct different business models by adjusting the numbers within a given business function. It takes a great deal of time and effort to create large databases of information such as commercial feasibility, intellectual property and funding (to name a few more metrics). In my model, these metrics represent functions, which are the building blocks of potential business models.

The chemistry of success


For example, an idea generated may be categorised as an innovation that is especially reliant on a short timeline, a unique mix of functional cooperation within the company, heavier funding on the front end and a healthy dollop of yet-to-be-determined marketing resources. Employing the science analogy, each of these represents a molecule. The ‘protons’, ‘electrons’ and ‘neutrons’ within each area are variables.

Using the cube model, the idea evaluators have a chance to pick the scores for these protons, electrons and neutrons with an attached weight thus enabling managers to compute the total ‘atomic mass’ of each component behind the idea. Each atom’s importance will emerge in relation to the scores on the other sides of the cube. Naturally, not every side or atom will have the same level of contribution. For instance, intellectual property may deserve a higher score than marketing or vice versa.

Thus, the cube becomes an effective way to judge an idea under many possible metrics (atoms). This model also allows business owners to compare ideas using numerical scores rather than merely subjective arguments. And this atomic-cube approach allows for rigorous reviews of the process used, so as to re-evaluate ideas whose scores strike a group of managers as way too high — or too low. Some years ago, organisations started to use 360-degree performance evaluations. In its own way, this process provides a 360-degree view of an innovation idea and, perhaps much more importantly, the chance to weigh the merits of that idea before large amounts of time and money have been deployed.

Stewart Clegg once observed, “Innovation is not just technical; it is also organisational and managerial.” Too often, it is only the factors that can be easily measured with hard numbers (such as technological specs or budgetary requests) that are discussed when trying to decide whether to commit to a proposed innovation programme. Though technology and money are extremely important factors in the process of innovating new products, they cannot be the only ones used to judge innovative ideas.

I propose the Strategic Innovation Cube model should be used to explore the true importance, relationships and roles of the different ‘atoms’ that are most needed to being an innovative idea to life. This approach could save many good ideas that are too quickly discounted and too easily discarded.

Companies such as SAP, Oracle and EMC are renowned for their innovation prowess. Much can be learned by studying what they have done — but their paths to progress will always remain, to a large degree, confidential. By testing innovations via every possible and impossible direction plotted on the Strategic Innovation Cube, managers in any company can decide with greater precision and higher confidence what to do about the unique innovation challenges that face their own company.