Once viewed as an illiquid asset class and best avoided, private equity is now characterised by high performance and exemplary governance

When the history of modern capital markets comes to be written, a large place will need to be given to the meteoric rise of private equity. At around 50 years old, private equity is a relative newcomer in the investment arena compared with the world’s venerable stock markets. But age is not the only contrast between the two. While private equity is growing fast (showing an eight-fold increase in the last 12 years alone), stock markets are holding level at best, if not actually shrinking.

The inverse relationship is no coincidence. Although private equity and public stock complement each other in many ways, attracting different types of company, they also offer rival models of corporate governance. And as private equity comes of age, the proven attractiveness of its governance model raises important questions – and not just for investors. So, should we rethink some of the founding principles of conventional corporate finance?

The private equity is composed of funds that invest in private companies and manage them on behalf of pension funds, endowments and other accredited investors. Originating in the late 1960s, buyout funds emerged in the 1980s and 1990s – to less than universal acclaim. To their many critics, private equity funds were asset strippers and corporate raiders. Terms like ‘barbarians’ and ‘locusts’ were bandied about.

More recently, two factors have combined to give the industry a much more positive public face. The first is the realisation that it has a record of generating growth and value to investors that makes much better reading than the financial leverage for which it was previously known.

The second, demonstrated during the global financial crisis, was the ability to make investments on a massive scale when few others were able to do so. After the crisis, as banks have faced increasing regulatory curbs on leveraged lending, private-equity funds have helped fill the gap as prominent providers of debt instruments and non-bank credit – a market that has mushroomed from less than $400 billion (£240 billion) in 1998 to $5.3 trillion (£3.9 trillion) in 2017.

Moving well beyond their traditional areas of operation, such as buy-outs and the supply of growth capital, they have expanded progressively, not only into private credit but into the financing of infrastructure, real estate and energy projects – a change of emphasis reflected in the increasing self-description ‘private capital’ rather than ‘private equity’.

The makeover has been completed by steadily increasing transparency, which has helped to dispel accusations of secrecy, while a burgeoning secondary market in private-equity – or private-capital – interests tackles head on the notion that it is an illiquid asset class best avoided.

Then, of course, there is performance. The graph below shows the sweeping outperformance of private over public equity in the portfolios of US pension funds. Driven by returns like these, institutional investment in private equity, rare until the millennium, has ballooned from $30 billion (£19.8 billion) in 1992 to $6 trillion (£4.59 trillion) today, with US public-sector pension funds and university endowments in the lead. Allocations are expected to treble again in the next decade. 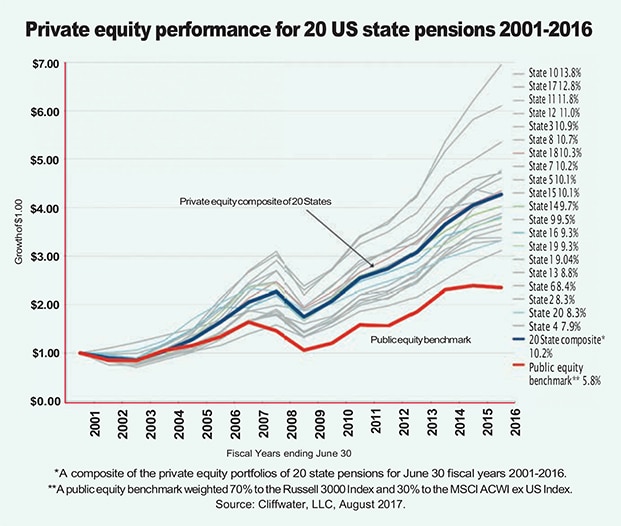 In sharp contrast with this exuberance, stock markets are languishing (if not in active decline), with the number of US listed firms halving from 7,322 in 1996 to 3,700 in 2015, during which time the aggregate market capitalisation of the quoted remainder more than doubled. The survivors are larger, older and often more concentrated than in the mid-1990s. The implication: US investors seeking a more diverse spread of equity investment will have to look beyond the stock market.

By way of a benchmark, in the same period US GDP was growing at a compound 3.6% a year in real terms. The publicly listed company is also in retreat in countries such as Germany, the UK and Brazil, although the decline is less steep than in the US. To someone schooled in the traditional view of capital markets, this may seem puzzling. Publicly listed and traded equities arguably provide the most effective mechanism for the allocation of capital. Individuals and institutions buy and sell shares in deep and liquid financial markets, in effect ‘voting’ continuously on the performance of company management.

At the heart of the conventional view is the fundamental principle of the separation of ownership and control, as famously advanced by Berle and Means in the 1930s. This has been taught for generations as the cornerstone of capital markets and corporate finance theory. Since investors’ money will go where it will be best used, separate management and ownership should exert a powerful discipline on managers by requiring them always to maintain the confidence of the market. That, at any rate, is the theory.

Yet the flaws in it have been apparent for many years, not least in the academic literature. Critics charge that, instead of pursuing the interests of shareholders, directors and executives have come to constitute an interest group of their own, one whose interests frequently diverge from those of investors – the so-called ‘agency problem’. Most obviously, critics point to executive-pay structures unrelated to performance and misaligned incentives such as the ‘poison pills’ devised to block takeover attempts, privileging as they do management’s pay and positions at the expense of shareholders, who are deprived of the benefit of the proper functioning of the market for corporate control.

Or consider corporate ‘cash piles’. In recent years US companies have accumulated an estimated $2.6 trillion (£1.99 trillion) in cash on their balance sheets, three times the figure in 2000, with the average S&P 500 company sitting on a hoard of $3 billion (£2.29 billion).

The classic model of equity investment suggests that, in the absence of any immediate use for this cash, it should be returned to shareholders. Again, the model seems not to be working as it should.

To counter these flaws, regulators and boards of listed company have put their faith in strengthened codes of corporate governance. Unfortunately, the supposed ‘improvements’ suffer from flaws of their own, starting with the very institution whose job is to safeguard shareholder's interests: the board of directors.

Attempts to refine and reinforce directors’ duties to investors are frequently stymied by top-heavy and ineffective boards. And while it is true that the importance of directors’ duties is increasingly emphasised, too often the result is a narrow, box-ticking culture that focuses on legal compliance rather than challenging the management.

Reliance on greater shareholder engagement has been little more productive. Attendance at annual meetings is minimal and investors have no real say in either the direction of the company or the appointment of directors, who are effectively selected by the management.

Finally, the use of stock-option plans to align management and investor interests, while seemingly promising, has clearly not had the desired effect of turning professional managers into laser-focused shareholders. Typically granted as part of the overall rewards package, stock options are the opposite of the ‘skin-in-the-game’ experience of someone putting their own money on the line.

In short, the proliferation of regulations designed to improve corporate governance has been ineffective and expensive, generating red tape and operational inefficiencies for little overall gain.

Flawed though the listed company form may be, until the advent of private equity there was no alternative vehicle for institutional equity investment.

Fortunately, much of what is problematic in stock market investment is addressed by private equity. Private equity is an engaged rather than passive owner, with a focus on timely operational drive; whether through turnaround or via expansion capital. Under private equity the board will be much smaller – typically five members – and managers are expected to invest their own money in the venture, as opposed to simply collecting stock options.

And private equity funds do not accumulate piles of cash. Their aim is an outright sale of the companies in the portfolio, followed swiftly by a distribution of proceeds to investors. For the last seven years in a row, overall cash flow to limited partners has been consistently positive as distributions have outpaced capital calls.

In light of all this, the increasing popularity of private equity investment as against the stock market should come as no surprise. But this should not be taken to imply it is suited to all types of companies. Finance is not a case of one-size-fits-all.

As a relatively expensive source of funding, private equity is best suited to companies in dynamic industries when opportunities are at inflection points, quickly scalable or in transition from one type of business to another. The traditional stock exchange remains the more natural home for large, well-established companies – but private equity has more than come of age. While it will not replace the publicly listed company model, it deserves its position on centre stage, allowing companies periodically to move between public and private status via buyouts, takeovers and initial public offerings. No longer a sideshow to public markets, private equity should be regarded instead as a mature and valued partner.

Its rise to prominence strongly suggests that some of the hallowed principles of finance theory, in particular the separation of ownership and control, are due some serious reconsideration.

Cut through the jargon and learn to make confident investments. Gain real-world insights into how deals are constructed on our short course, taught by the leading global thinkers in the field.