The path to power

Do leaders get “selected” by the times they live in, or “self-select” – put themselves forward because they recognise this is their time?

Nigel Nicholson
Leadership
Save to my profile

Do leaders get “selected” by the times they live in, or “self-select” – put themselves forward because they recognise this is their time? 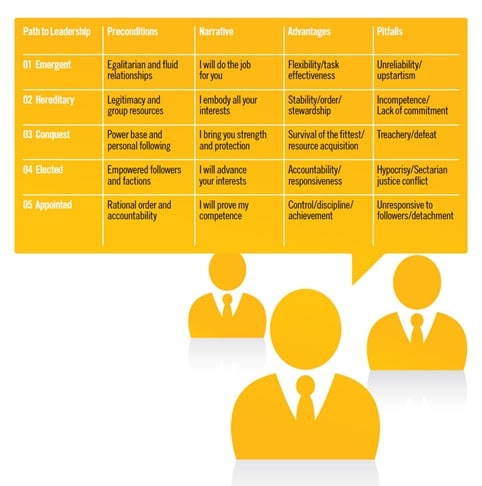 It is a haphazard business at the best of times, and we would be kidding ourselves if we supposed this to be a smooth organic process.  In fact it is very lumpy with lots of casualties and failures on the way – people who assumed they were God’s gift and turned out to be the devil’s curse.  There are a limited number of ways of getting leaders – five actually.  They depend, of course, on context, and thus have been popular at different phases and times.  In the contemporary world all five prevail.  Each has its constraints or preconditions; a narrative or a promise of what they will deliver; advantages; and hazards or pitfalls.


In the hunting party, sports team, music group, project team, partnership firm there may be no designated leaders, but there is leadership.  It may consistently reside in the strongest player, or the most commanding personality, yet who leads, on either the task in hand, or how the group is functioning, is likely to fluctuate according to what stage the group is at in its task or what kind of task it is engaged upon.  Emergence is a deeply attractive primal model – except perhaps to those who want to be kings – Boehm’s “upstarts”.  One is reminded of the classic exchange between “upstart” Michael Jordan and Phil Jackson, coach of the Chicago Bulls basketball team; Jackson telling the players “There is no ‘I’ in team” and Jordan replying “Yeah, but there is in ‘win’”. The promise of the leader of the moment is operational – I will do the job for you.  This is also the weakness of the model – it lacks consistency and vision, if that is what you want.  When it comes to longer term strategic questions, the team may struggle.  Throughout history, however, there have been emergent leaders who have consolidated their position.  Nelson Mandela is a notable example.  Duke Ellington, the great bandleader, was another.


Monarchy is not a bad solution to the need for stable leadership, so long as the monarch has the right combination of wisdom, humility, and strength – to be the chief servant to the people.  It is a position of trust and duty, and many a family firm has thrived with this kind of paternalism, and more rarely, maternalism, in such leaders as Ratan Tata, Marilyn Carlson Nelson and William Gore.  There is clearly a human appetite for hereditary leaders – look at the Gandhi dynasty of India, or the Bushes and Kennedys in the United States.  Dynasties require legitimacy.  In the family firm it comes from ownership, though nepotism is often challenged by modern business values.  Monarchs have typically invoked a divine right, but a lot of blood has been being spilt while claiming God’s authority.  The narrative of selfless embodiment of all the people’s interests is appealing, but easily corrupted into the worst kinds of Big Man leadership, and always vulnerable to the gene lottery – incompetent and uncommitted successors.


In the primitive world of leadership by dominance it is a Darwinian struggle from which the commonwealth should ultimately benefit.  Genghis Khan unites the incoherent tribes of northeast Asia. Napoleon Bonaparte creates a new order for Europe.  The coup-d’état follows the same logic.  It is the way weak hereditary leaders are replaced by strong ones, and the people gain through the security of the chieftain’s power and resources.  In the boardroom coup d’états have become quite common paths to succession.  Look at Steve Jobs and Henry Ford, both ousted because they were seen as damaging to the health of their firms.  The successor’s narrative is one of reassurance about the new era she will usher in.  The pitfalls are numerous, not least that promises will not be kept, or that it brings the instability of future rebellions.  After all, if it happens once it can happen again.


In the absence of God or an army at your back, where better to get your legitimacy than from your followers, especially when they have the resources and sufficient voice to pull you down if you screw up?  This is where leaders’ narratives carry most weight.  Here the story has to carry them into power and sustain them.  It is no wonder that politics is full of idealistic vision wrapped up in vague, slippery claims.   You need a story that can be continually reworked to carry on convincing people, especially when reality changes.  Political leaders are widely derided for this hypocrisy, even though, paradoxically, they are often talented, moral and belief-driven people.   In democratic politics the process became simplified by the innovation of political parties representing sets of interests.  The risk is that leaders fail to unite, and are seen as the captive of a sectarian group; the advantage is that they are accountable and have to answer the call of justice.  Something like an elective process also happens in a disguised form in business.  What appears to be a rational appointment is in reality the result of a boardroom vote, or the summation of “soundings” among followers.  In some highly rational organisations succession is according to a predetermined plan, but it is much more common for the very topmost appointments to be made by a more political process.

It seems the simplest and most rational way to create a leader.  Some wise person, or better, a panel of experts, points and says, that’s the person who is fittest to lead this group at this time. This is done on a cool and impartial appraisal of the job to be done and the qualities of the person.  At vast expense armies of HR specialists are employed to oversee the process.  The US military and British Civil Service developed some of the first sophisticated assessment regimes, and AT&T turned these into fully blown talent management systems.  IBM and legions of organisations have since followed this path.  However, these systems have been perverted by deeper ancient instincts. The reality is that appointments are often less rational and impartial at all levels, but especially the more senior you get.  Emergent leaders get “appointed” to regularise their power – this happens a lot in politics.  Family firms create rational systems to dignify the succession of relatives.  Conquering warriors are promoted to official leadership roles.  Elective and appointing processes get intertwined.