The destruction of Marconi

Major shifts in strategic directions can work for some companies.

Major shifts in strategic directions can work for some companies. But more often they can lead into areas that the management does not understand – with disastrous results. 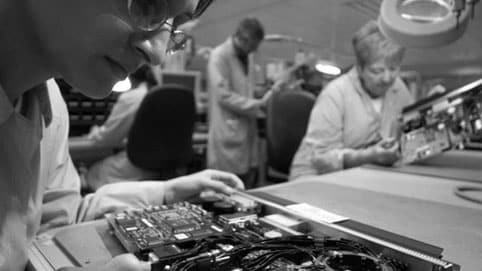 General Electric Company (GEC), the UK company with no relation to America’s GE, grew rapidly in the 1960s under Arnold Weinstock’s domineering but effective leadership.

Like its American counterpart, GEC grew into a conglomerate with interests in such diverse businesses as white goods, defence electronics, telecoms and power systems. While there was no real logic underlying this array of businesses, Weinstock held the company together through a combination of his imposing personality and a strict system of financial controls. At its peak GEC had sales £11bn and a cash pile of £2bn.

Lord Weinstock retired in 1996 and was replaced by George Simpson, a former executive at Rover. Over the course of the next five years, Simpson and his finance director John Mayo masterminded a complete rethinking GEC’s corporate strategy.

They decided to focus the company on the fast- growing telecoms equipment industry. He bought two mid-sized US competitors (Reltec for $2.1bn and Fore for $4.5bn) for large sums of money and invested in developing a range of new products to compete with industry leaders Cisco and Nortel. To pay for this growth, most other businesses, including defence electronics, white goods and power systems were sold off. To reflect this change of strategy, GEC was renamed Marconi.

Marconi’s share price peaked in August 2000 at £12. Then things started to go badly wrong. The dot-com bubble burst and demand for new telecoms equipment dried up. Lucent, Cisco and Nortel all announced profit warnings. Marconi’s share price dropped even though it denied that its sales had been hit. Then, when the profit warning finally came, angry investors dumped the stock.

The downturn was far more severe than anyone anticipated and with large and mounting debts Marconi was facing bankruptcy, its shares worth less than one per cent of their peak value. Simpson and Mayo were forced out. A new executive team was brought in; £37bn of market value had been destroyed in just a year and a half. In November 2003 Marconi announced half-year losses of £149m in the period to September, down from £458m a year previously.