Donal Crilly
Leadership Corporate governance Corporate Social Responsibility Strategy Strategic direction Corporate innovation
Save to my profile
Firms that operate in the same industry with similar stakeholders and organisational pressures could be expected to respond to stakeholders in the same way. But they don’t. Donal Crilly set out to discover why. 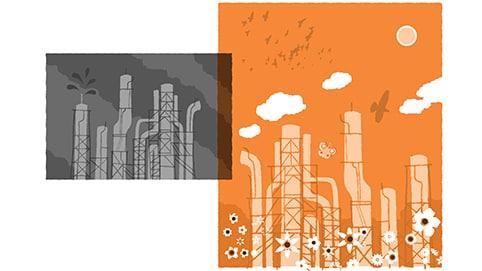 Different people have different desires, but firms want the same thing: continued investment support leading to continued prosperity and potential growth.  Any firm with a concern for stakeholders (shareholders or investors, customers or consumers, employees, suppliers, communities — and even governments) needs to prosper. As every firm has the same basic goal, it might seem that every firm would deal with pressure from stakeholders, or with an external event, in much the same way.

Increasingly, that investment and support may hinge on the public’s perception of a firm’s dedication to social responsibility, that is, how a firm chooses to pursue benefits to society as a whole outside of the legal, technical or economic requirements it faces. Over the past few decades, there has been increasing awareness of and interest in corporate social responsibility, which has resulted in everything from large-scale commitments (such as zero-emissions manufacturing plants and re-engineered product lines that use fewer resources or contain fewer dangerous chemicals) to smaller-scale pledges to use only recycled paper and ban plastic water bottles in offices.

Stakeholders put pressure on firms to respond to social issues in various ways; and they expect different things in response, dependent on the industry, location and other factors. These pressures may have a positive effect — spurring firms to make changes that benefit not just stakeholders — or a negative one, if the firm cannot live up to expectations and remain economically viable.

Recently, I worked with colleagues from universities in Canada, Italy and the US. We found that firms make vastly different decisions about how to deal with these pressures from stakeholders; some firms may even sabotage, undermine and diverge from their own policies in response. Understanding how and why these things occur, and what drives managers to make decisions that seem counter to logic or their own company’s ideals, may help other managers avoid pitfalls when faced with similar pressures.

In two separate research studies, I joined others to look at slightly differing aspects of firms’ dealings with stakeholders and their expectations. In a study with Pamela Sloan of HEC Montreal, we used social performance data and extensive personal interviews with the decision-makers at eight firms across four industries — chemical, extractive (drilling or digging), food and technology. In another, with Maurizio Zollo of Bocconi University and Morten Hansen of UC Berkeley, we examined 17 firms, matched up in pairs and triads by similar industry and geography, also using interviews and archival data.

The objective of our studies was first, to find an ‘inside-out’ explanation that accounts for the heterogeneity in corporate attention and, by extension, performance. We sought to determine if it’s possible that attention to stakeholders is not only the result of objective, external influences, but that it also rests on how managers conceptualise their firm and its relationship to society. Second, we attempted to explain the variance in policy implementation among firms — that is, why some firms decouple practice from stated policy while others implement policy no matter what, and whether the basis behind this variance can be found in the external pressures facing the firm.

We undertook this research because we felt that the investigations into previous theories about firm response to stakeholder pressures and expectations were incomplete or too simplistic. Previous studies did not provide a real picture of the origins of the responses that alter firms’ policies and futures. These studies skimmed the surface of stakeholder/firm interaction, focusing on issues such as the deception inherent when firms decouple policy from practice. While such issues are a factor in how firms respond to stakeholders, we were more interested in expanding the knowledge base regarding the interaction between firms and those they’re beholden to and reliant upon. Additionally, those earlier results were especially important to revisit in the current climate, in which stakeholders have increasing expectations about corporate social responsibility and firms are ever more reliant on public perception to remain competitive.

Stakeholders present both opportunity and risk to firms, and how managers view that dichotomy is a crucial component of their response to stakeholders. Different industries require different levels of attention paid to stakeholders, with differing amounts relegated to varying types of stakeholder. For instance, chemical firms face greater pressure from environmental groups than do high tech firms owing to the potential ecological hazards chemical companies deal with on a daily basis.

The matching of firms in the same industry for the purposes of these studies demonstrated how managerial decisions prompt distinct levels of attention paid by firms to certain stakeholders, which can have wide-ranging effects. It would seem logical that managers across industries should want to balance risk and reward. Our research found, however, not just subtle differences between individuals but quantifiable differences in outlook that drive firm response to (and perception of) stakeholder pressure and the way firms should deal with it.

Our evidence suggests that something we deemed enterprise logic — logic governing how a firm’s top managers conceptualise their firm and its relationship to society as a whole — plays a key role in explaining the scope of corporate attention to stakeholders. This enterprise logic extends its influence in two ways: first, by shaping the way managers see the basic issue of attention to stakeholders and, second, by affecting that differentiation within firms. Somewhat irrespective of the attention demanded by those outside a firm, managers are guided by this logic and other factors to react to the stakeholder demands for social responsibility and other issues. How they react is a feature of that logic and their desired outcomes.

Some managers, who chose to give more narrow scopes of attention to stakeholders, seek to reduce threats to their business, while those who demonstrated wider attention to varying stakeholders were seeking both to reduce threats and seize opportunities. The interaction of enterprise logic and risk attenuation is clear in the first prong — the way managers see the basic issue of attention. This may be because managers who primarily seek to reduce risk perceive a greater capacity to control a few, largely internal stakeholder groups through payments of dividends or salaries. They are less attentive to external stakeholders who are more distant from their span of control. In contrast, managers in other firms, who frame stakeholder engagement also in terms of seizing potential opportunities, are also alert to the demands of socio-political stakeholders not conventionally associated with the production function of the firm.

We uncovered another mechanism that helps explain these variations. A differentiation of attention, in which different managers within the same firm are tasked with attending to distinct stakeholder groups, enables a firm to provide attention to a large number of assorted stakeholders. This seems to represent a solution to the problems of diverse stakeholder interests splitting managerial attention and making attending to needs and anticipating issues more complex. Assigning multiple managers not only contributes to superior performance and more active response to stakeholder expectations but also allows firms to perceive threats as more predictable and controllable.

By itself, attention to stakeholders does not necessarily mean than firms will implement policies to satisfy their stakeholders. Firms can promise one thing, but do another. Previous studies had discovered that some firms would decouple policy from practice if a powerful CEO stood to lose from implementing policy. These studies overwhelmingly depict a cynical view of corporate life.

We found a number of explanations for firms’ choices to decouple their stated policies dealing with social issues from the reality of their operations. One of the primary rationales was cost cutting, which can mean many things from meeting regulatory requirements to choosing more cost-effective (yet within-bounds) options for production, resource control or even firm management. However, we found that the decoupling of policy from practice can still occur even in the absence of managerial intent – for example, when there exists a contradiction between local pressures facing a specific plant and overall firm policy — or when external stakeholders have inconsistent or unclear expectations of a firm’s corporate social responsibility. Managers are not necessarily deceptive, but rather seem to muddle through when faced with complex, rapidly changing, stakeholder pressures. This leads to policies being adopted than are not consistently implemented on the ground.

Hence, firms face an important challenge. They must find ways to handle stakeholder pressures, which seem to be dealt with best by diversifying managerial attention to stakeholder needs. This allows for varying levels of attention to be paid to different subsets of stakeholders and perhaps strengthens the firm’s ability to be flexible towards a changing social or business environment. At the same time, inconsistent stakeholder pressures can be to blame for decoupling policy from practice, and having a well-integrated internal consensus among decision-makers about firm policy and the necessity of maintaining policy in practice is crucial.

The short-term cost benefits of decoupling, whatever the inciting event or cause, may not remain in the long term. In the same way, short-term decisions to have fewer managers dealing with stakeholders or less time spent attending to stakeholder pressures to save time, money or avoid risk may, in the longer term, produce the opposite effect. The pressures attendant to corporate social responsibility that lead firms to subvert their own stated policies can lead to greater problems than the stakeholder pressures. The self-interest that drives firms to make decisions that diverge their practice from policy can be exploited to encourage more oversight, managerial coordination and response to stakeholder concerns about social responsibility.

In general, firms that promote diverse managerial attention to stakeholder concerns (in terms of social responsibility as well as in other areas) and focus on opportunity as well as risk avoidance, reap the benefits. Our principal finding, after examining years of data as well as conducting hundreds of hours of interviews with managers across several industries and their stakeholders, is that some firms are better at addressing stakeholder concerns because their managers have fundamentally different ways of conceptualising the firm and its relationship to society.

While this seems a simplistic summary of the differences in attitude and enterprise logic we discovered, it is at the crux of how firms behave and choose to implement, or not to implement, their policies. Diverse groups of stakeholders foist different expectations on firms. All firms today must deal with the demands of corporate social responsibility, whatever form those demands take, the same way that all firms seek prosperity and growth opportunities.

As some managers perceive relationships with stakeholders as involving risk, conflicts and trade-offs, others see opportunity, interdependence and mutual benefit. Finding a balance between these two points of view can help firms find their way in the newly challenging world of social responsibility and stakeholder demands.