More than two thirds of acquisitions fail to create meaningful shareholder value. When mergers between similar companies seem an obvious way of gaining opportunities of scale and scope, why do so many lead to disaster? 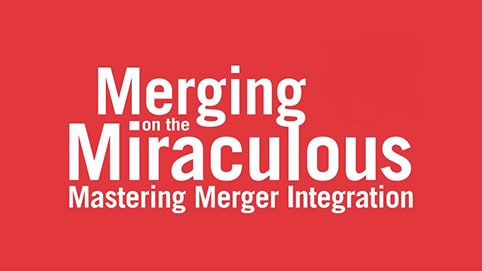 Richard Carr, Graham Elton, Sam Rovit and Till Vestring emphasise the importance of having an investment thesis and of getting the planning right from long before the merger announcement – so that the new team can hit the ground running from the first day of the new company’s existence.

Shanghai Automotive Industry Corporation’s sudden exit from acquisition talks with MG Rover earlier this year highlighted the risks involved with the acquisition process. Despite intervention from the UK government to reconsider, the Chinese company refused to take on the failing UK car giant.

The Chinese car firm had reason to be cautious, and not just because Rover was ailing: acquisitions are a notoriously treacherous way to grow. And Bain and Company’s 30 years of experience of mergers and takeovers indicates that the most dangerous time of all occurs after the contract ink is dry and integration efforts begin.

Why is this? Part of the reason is that too many corporate mergers take place in the strategic stratosphere, without an investment thesis that sets the deal on bedrock and shows how the new entity will look, operate and act to make more money. In effect, the problem is a simple one – companies are not planning ahead, despite what they might say.

The best integrations start with a stringent blueprint for owning the business and making it a better one. Having a proper investment thesis not only gives the acquisition a leg up, it also tells acquirers right at the outset where they should focus their integration efforts to gain the most value from the deal.

To prove the worth of this concept, we interviewed a score of the most successful acquirers, we surveyed 250 global executives involved in M&A, and we conducted several studies correlating acquirers’ deal integration practices with their deal success. Four significant rules for success emerged:

Identify during due diligence the areas that need to be integrated urgently. Then prioritise these areas at takeover.

Integrate quickly where the takeover affects the financial opportunities that informed the deal’s investment thesis.

Put cultural integration high on your agenda. As the flip side of integration focus, keep most of your employees’ efforts trained diligently on the base business.

Integration is difficult, but when executed thoughtfully it greatly increases a deal’s chances of success. Handled poorly, it is the leading cause of deal failure. In Bain’s survey of 250 global executives, two out of the three top reasons given for disappointment with acquisitions were related to integration. These included ignoring integration challenges, and having problems integrating management teams and/or retaining key managers.