Management - according to a wild animal?

Know anyone who talks about the business world using phrases like “a new broom sweeps clean” or “cheeky monkey” while ...

Stuart Crainer and L.Vaughan Spencer
Business management and operation
Save to my profile

Know anyone who talks about the business world using phrases like “a new broom sweeps clean” or “cheeky monkey” while excitedly jumping around (much to the dismay of many left-brained business executives)? 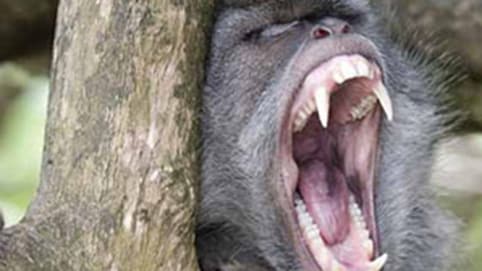 If you’re nodding yes, chances are you’ve met, read or heard L. Vaughan Spencer. If you’re nodding to sleep, wake up! Stuart Crainer wants to introduce you to a whole new genus of management guru.

Cynicism is endemic in business. Corporate scandals are so common that “Same old, same old,” says the newspaper reader after scanning the front page. Would the comic strip “Dilbert” be so popular if most workers didn’t recognize their workplace while reading it? Management gurus are perhaps the most adept (dare I say opportunistic) incarnations of this cynical breed. Who else can make a living by repackaging old ideas, adding a gloss of jargon, promoting them as innovative and then charging companies a fortune for their supposed insights? “Our ideas are much the same, indeed they are the same, but we use different words. The trick is to have your own catch-phrase,” a strategy guru recently explained to me.

It is a relief to come upon that rare being, an honest guru; someone who tells it like it is, L. Vaughan Spencer. He is a reassuring, fashionably ponytailed but strangely bearded, presence in a world populated by the specious. His message is that of personal enlightenment, self-development and even financial success: we can be what we want to be.

Fellow motivational speaker, author and business tycoon, Chuck Schneider, has described Spencer as “the Tom Peters for the Britney generation. He is awesome.” If management really is the new rock and roll, then Spencer is Bill Haley. One convert labelled him “the Eminem of personal self-enhancement”. A more useful comparison may be with the smooth-talking, always persuasive Sergeant Bilko.

Spencer’s reputation has developed gradually, a slow burner in a world of empty comets. He is a prolific author. His books include The Road Less Tarmac’d, Garden Your Way to the Top, The Seven Hobbies of Highly Effective People and Chicken Nuggets for the Soul. His most recent is Don’t Be Needy, Be Succeedy – the A to Zee of Motivationality. Published in 2008, it has proved to be an international best-seller, putting him on a par with the extra-special Malcolm Gladwell. Spencer’s books are celebrations of human potential as much as dynamic calls to action. “Business is a dog-eat-dog world and, if you don’t scratch my back, then your cat won’t get the cream,” advises Spencer in his inimitable style. As well as his veritable library of books, Spencer has also acted as personal coach for Jean-Pierre Dupont, the man behind the internationally acclaimed Cirque du Merde, which features circus artists from the greater Montreal area.

Spencer really comes alive on stage. He stalks the stage like a wild animal and casts out metaphors with something approaching abandon. The audiences lap it up. His “Don’t be needy, be succeedy workshops” have the irresistible air of revivalist meetings. They are “gigs” rather than seminars.