The economic powerhouse of China is transitioning as it has enriched a middle class looking for more. Developing homegrown entertainment is an important part of this switch to domestic demand.

Ultimately these creative companies hope to transfer success in China into global success. Three LBS alumni, who have built successful and fascinating careers riding the crest of this nascent industry, share how LBS has influenced their careers and what ‘Made in China’ will mean in the future. “I think that in the near future, China’s middle class will be the biggest in the world,” observes Judith Zhai (EMBA2017). “This domestic consumption is focused on what might be termed lifestyle-orientated and so entertainment is very much focused on China, including Chinese movies, TV dramas, sports and lifestyle shows.”

Zhai is President of Strawbear Entertainment Group, a TV production company, and a former Alibaba Pictures Group vice president of strategic investment. In the beginning, most of the production companies in China focused on how to emulate Hollywood, says Zhai. Now they have moved to away from the Hollywood model. Today, cinemas are very developed in China, but in the first quarter of this year box office takings were lower than last year. And this is a sign of the maturity of the market, according to Zhai.

“I think this is only industry I've found, where I can combine success with purpose and impact.”

“People are looking to their mobile phones and tablets for their content,” she explained. “For the Chinese middle class this means that more and more people like to spend time at home with their families watching TV dramas but through different platforms.

“LBS helped me think more internationally, more globally and in a more open-minded way. It is an experience I draw upon for my work with Strawbear Entertainment Group.”

With this maturity in China, Zhai believes there is growing realisation that when Chinese films have been successful internationally (like The Wandering Earth), they have told universal human stories that happen to be Chinese.

“I think the job here we are all focusing on is to be a ‘China storyteller’ first,” says Zhai. “It is the storytelling which really makes it all work in the end.” Every career has two mountains according to George Sun (MiF2001) and after a successful career in finance he is still climbing his second peak.

The Beijing-based LBS alumnus spent a decade in banking before moving into buy-side private equity, and eventually starting his own venture in KK Mandarin – an online Chinese language teaching platform.

While finance has given Sun professional success, his first peak, it has not given him the opportunity to explore what is truly meaningful to him. He had taken his career in finance as far as it would go and he needed to go back to his roots in Western China to discover a personal second peak.

“I found I would be more satisfied if I was creative in a way which actually solves some pain points in society,” he says.

“My philosophy is, I would rather try something different. Instead of just improving and repeating myself in the same path, with a better result. I think each person is different but I just wanted to be explore myself and to be myself. I realised banker and investor is not the only two words I wanted on my tombstone.

“I was born and raised in Urumqi, northwest of China, a poor Muslim area. I am Han Chinese by background and my parents always told me, ‘Never compare yourself with others, just compare yourself to your past’. So I have always been passionate about education, it is what has made me what I am today and I have grabbed every opportunity.”

Sun has used education to propel himself around the world, out of Urumqi, to Beijing, to London, to Hong Kong, and now back to Beijing. Reflecting on his journey, he decided to ditch the wealth manager plans and throw himself into education start-ups.

“There is huge demand for education in China,” notes Sun. “I think this is only industry I've found, where I can combine the first peak of success with the second peak of life purpose and impact.

“The second mountain is about giving back to society and helping others. It is harder to climb and sometimes you need to come down the mountain of wealth and desire to climb the second. Successful wealthy people find it difficult to make that step. But you see a lot of business students today are very mature, mentally and spiritually – they want to have an impact, they don’t want to just make money. For me education is the perfect way to make that impact. To give others the opportunities that I have benefited from.”

Sun’s online Mandarin learning platform for four to 12 year-olds, KK Mandarin has already attracted the funding from the lead investor of Bertelsmann Investments and Uphonest – a Silicon Valley-based venture capital firm. It aims to teach proficiency in the language but also the culture through the stories behind the characters in Mandarin script.

“LBS helped me think more internationally, more globally and in a more open-minded way. It is an experience I draw upon for my work.”

The concept not only teaches the language as a mechanism for communication but also a way to connect and reconnect with Chinese culture its stories and wisdom. Even KK Monkey, the firm’s logo, relates to Sun Wukong the Monkey King, an important figure in Buddhist folklore. KK stands for Kids Knowledge. In Chinese, it means Kai Kai, representing Kai Xin (open your heart), and Kai Wu (open your mind).

KK Monkey is a piece of intellectual property he hopes to really give character and appeal to the courses. Sun notes a huge appetite among the Chinese diaspora and in the West in general for insight into Chinese culture. It is an appetite matched by Sun’s ambition to make KK Mandarin the largest online Mandarin learning platform in the world. 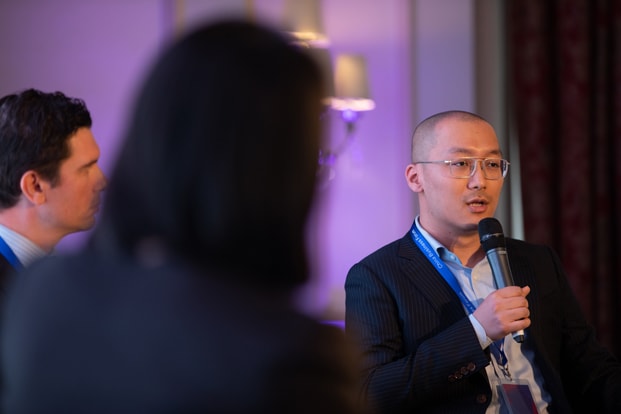 The risks, creativity and initiative of entrepreneurialism has always interested and motivated Shanghai-based Will Wang (MiM2012).

However, his career after LBS has not lead him into setting up a disruptive business of his own but into a role at a historic family-owned publishing firm. For the past seven years he has worked as Managing Director of Bertelsmann Asia Investments. There, he has had the opportunity to research and work with dozens of the most exciting companies in the region including Keep, Club Factory and KnowBox among many others.

“We are at the frontier,” says Wang. “Exploring funds for this old media company, we invest in early stage startups in the tech area.

“Bertelsmann impressed me with the way they emphasised entrepreneurship and creativity. That really surprised me because it's a business with very long history.

“At LBS I attended a human resources program called Talent meets Bertelsmann. We participated in a business plan competition and somehow we got into the final. Some of my peers went into other parts of Bertelsmann, TV units, or publishing units.”

“I think it's interesting to be an observer of kind of a transformation case of a 200-year-old company such as Bertelsmann. At first, I was just being curious and now I’ve been on this incredible journey with them, building this fund from its very early stages. I’ve witnessed the portfolio grow from 10 to now 130 investments.

“I feel lucky that I got an offer from Bertelsmann Investment when I was studying at LBS. It gave me the luxury of really enjoying the whole programme. LBS was life-changing. It gave me exposure to the whole European experience, to Paris, to Portugal and Barcelona, I spent half a year in New York, I traveled by other means to Africa. It was really eye-opening and it is so diverse.”

Since life at LBS Wang has played an important role in investing in 130 companies at Bertelsmann Investments. Target companies are usually on the peripheries of Bertelsmann Group’s media empire but they are only rarely purchased.

“We do not really seek synergies with Bertelsmann in the investments we place, I think 20 to 30% of consideration may be that,” says Wang. “Sometimes we are looking at majority shareholding opportunities. And we will propose it to the Bertelsmann group, if they want to buy for example, the Chinese version of Netflix.”

Bertelsmann Group’s revenues are close to $20 billion annually, about half of which comes from TV networks in Europe, and another 10 billion from book publishing that includes Penguin Random House. With this behind it Bertelsmann Investments places its money into startups for between five and seven years. It also benefits from not having any limited partners.

“I always wanted to be entrepreneur,” says Wang. “In this role I talk with entrepreneurs on a daily basis. Up to 300 pitches a year. So it really fulfils my expectations.”

Stand out from the crowd, as you launch your business career, and thrive in a competitive job market by studying at a highly reputed business school.