Leadership and the art of discretion

Nada Kakabadse and Andrew Kakabadse
Leadership
Save to my profile 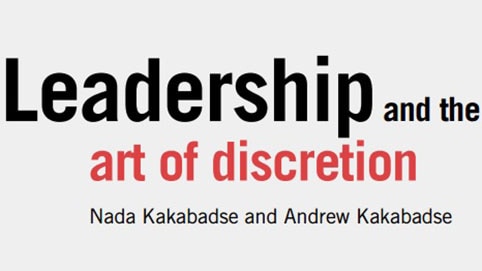 The shift from physical capital to the softer models of capital – such as social and human capital – has led to the emergence of network-based organisations. In these organisations the emphasis is on a group-based view of leadership rather than a single person clearly highlighting the path forward. Understanding and being responsive to multiple stakeholders in their context is now the leader’s prime concern.

Effectively addressing multiple stakeholders means recognising and responding to multiple agendas. Negotiating paths through a multiplicity of issues and circumstances is near impossible for a single individual. As a result, network-based organisations, by their very configuration and purpose, require more leaders. The neat coupling of more issues to address and a greater number of actors to address them means that choice is ever more important in leadership roles. The new generation of leaders are required to extensively exercise discretion to address the issues they face.

In practice, discretionary leadership means that the leader shapes the role and determines its more intricate nature. Discretionary roles vary according to the degrees of freedom they offer their incumbents. Certain roles will only allow for changes to the configuration of particular jobs, whereas ultimate discretion aims to make a profound impact on the strategic future of the enterprise.

A role with clearly assigned parameters is one where the incumbent is assigned resources and given the specific brief to pursue particular courses of action (prescribed). The limited freedom of the role holder requires the person to leverage existing resources, irrespective of whether those resources are considered adequate to do the job. The role holder may even be directed to act in a manner considered suitable to achieve the goals of the task, team, department or organisation. Roles with broader discretion require the role holder to establish the parameters of the role, the direction they are to pursue and to be responsive to the circumstances they face.

Ultimately, discretionary roles are those positions for which organisationally beneficial behaviours and gestures can neither be enforced on the basis of formal role obligation nor elicited by contractual guarantee or reward. In response to the pace and pressure of organisational change, the nature of discretionary boundaries is increasingly determined by personal views, concerning the challenges leaders face and the nature of those with whom they interact. The idiosyncratic nature of the organisation, the peculiarities of each leadership role and the characteristics of the individual, are critical considerations in determining role boundaries and parameters.