Just one A away from success

Been working hard without success? Getting ready to give up? Helga Drummond and Julia Hodgson say you should think hard about doing so.

Helga Drummond and Julia Hodgson
Organisational behaviour
Save to my profile

Been working hard without success? Getting ready to give up? Helga Drummond and Julia Hodgson say you should think hard about doing so. How you decide can affect what you decide. 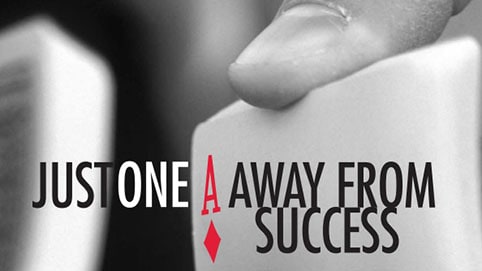 You’ve invested a lot, perhaps all you have, in a venture whose prospects are looking dismal. Do you quit or press on? You may find an episode in the life of Bunker Hunt instructive. As told by Stephen Fay in his 1983 book, Beyond Greed, it was 1953 when this obscure entrepreneur applied for a drilling licence. The prospects were exciting as geologists advised Hunt that an oilfield recently discovered in Algeria would almost certainly extend into Libya. Unfortunately for Hunt the socalled “Seven Sisters” (multinational oil companies) were already drilling in the best sites.

The only concession available to Hunt was a site far remote from the Algerian border offering such miserable prospects that even the customary bribe to local officials was waived. Hunt pressed on; he drilled for years finding nothing. Moreover, despite their markedly better chances, the “Seven Sisters” did no better. Eventually, one of the “Sisters”, British Petroleum (BP), gave up and went into partnership with Hunt; but the search for oil was a dry one.

In 1961, the rig superintendent was instructed by BP to stop drilling and return home. It was the final shattering blow for Hunt who had invested all his money in the venture. Fay says that’s when something remarkable happened: “Then, just for luck, the rig superintendent drilled another ten feet into the sand before withdrawing the bit from the third hole, and, in doing so, uncovered Bunker’s ace. That ten feet was enough to pierce the cap of one of the world’s largest oil fields”.

There are two problems in decision making. One is persisting for too long with hopeless ventures and ending up “throwing good money after bad.” The other, as this tale shows, is risking all by giving up too soon. Ill-judged decisions to quit could be costly. When Honda killed its famous V-Tec engine in the mid 1990s, it destroyed the main reason to buy its two-seater sports car. In the early 1980s, Coca Cola dropped their traditional formula and saw sales slump as a result; the company soon recognised its mistake, but not all exit decisions are easily reversible. In the mid-1980s, the UK saw many coal mines shut down because they could not produce a profit in an oil-is-cheap economy. With oil prices rocketing, it’s going to take a major effort to reopen those mines, but that action is surely imminent.

Research by psychologists suggests that whilst we can never eliminate the possibility of decision errors, we can reduce the risks of making wrong decisions by being aware of the emotional and cognitive biases that can undermine sound judgement. What are the main sources of bias? And how can decision makers counteract them? There are numerous logic trails that can lead you into the wilderness:

The bottle’s half empty.

Framing is one reason why decision makers may quit too soon. Framing refers to mathematically identical situations expressed positively or negatively – just as a bottle may be described as half full or half empty. Decisions about faltering projects are likely to be negatively framed. In theory, negative framing should produce better decisions than positive framing. This is because when projects are perceived negatively, decision makers tend to subject them to much more rigorous scrutiny, whereas positively framed projects are likely to go through “on the nod”. The trouble is such intense critical scrutiny can distort the sense of proportion with the result that problems become more apparent than real.

There is no money in the budget.

Whilst budgets can help prevent costs from spiralling out of control, budget setting is a double-edged tactic. Experiments have shown that expenditure slows as budgets get used up, and, once the budget is spent, decision makers may well terminate a venture even though there is a clear economic case for persisting.

It is a mistake to starve projects of funds just because of pressure on budgets. This is because budget depletion is what accountants call a “noninformative loss”. Budget depletion merely indicates that a certain amount of money has been spent. It says nothing about the state of the project and whether it is worth completing. Yet how often in organisations do we hear of good ideas being rejected because “there is no money in the budget” and of appointments of key staff being frozen to make savings on the budget?

Budgeting does not just apply to numbers on a spreadsheet. Budgets can be “mental”, what you expect or hope for. You can reject the 70-pence candy bar that you can easily afford simply because you wouldn’t “expect” to pay more than 50 pence. The UK might have had tilting trains 25 years sooner, but the now-defunct British Rail abandoned the project after having invested millions of pounds in it. Why? After a prototype rail car began service trials, passengers complained of nausea. But British Rail had insisted that the new trains (with novel and complex technology) run on existing track and signalling limits that were themselves relics of the Victorian era. In the end, it wasn’t the need for more money that stopped the innovative rail cars, it was the exhausted “budgets” of time, patience, and goodwill.