How microentrepreneurs could change the world

Entrepreneurs have always been heroes in the business world.

Rajesh Chandy
Entrepreneurship Development economics
Save to my profile

Entrepreneurs have always been heroes in the business world. But, while the world routinely extols people like Richard Branson and Bill Gates, there is a much larger world of entrepreneurship to be found in emerging markets. Rajesh Chandy and Om Narasimhan explain how micro-entrepreneurs may be a major factor in the return of a robust global economy. 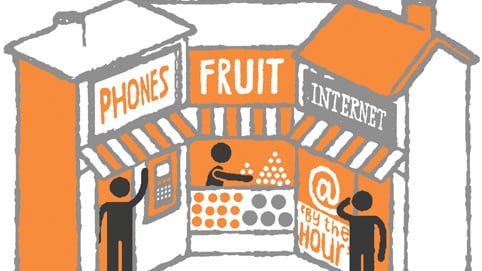 Many in the West are used to hearing scholars, practitioners and policy makers extolling the virtues and benefits of entrepreneurship. A listing of the world’s top hotspots for entrepreneurship therefore comes, quite often, as a surprise. Entrepreneurship, traditionally defined as the activities associated with the starting and owning of one’s own business, is, in fact, much more prevalent along the alleyways of a poor country than along the highways of Silicon Valley.


Walk into any food market in a developing country, and amid the noise, amid the crowds, and amid all the energetic activity and apparent chaos, one glimpses capitalism in its most unvarnished form. One part of the market is occupied by vegetable vendors, all selling seemingly identical assortments of vegetables, at close to identical prices. Another, more enclosed space is taken up by the meat vendors, with those selling chicken clustered together and slightly away from those selling goat meat. Walk a little further across the market, passing by the fruit vendor section, you reach those selling cooking utensils — again selling seemingly identical assortments at close to identical prices. Each of these vendors is a micro-entrepreneur, in that he or she owns and operates a business with five or fewer employees.


Of course, micro-entrepreneurship in emerging markets is not restricted to food markets alone. For most of the world’s poor, micro-entrepreneurship is the only way to eke out a living. In Peru, 69 per cent of urban households earning less than $2 a day operate a non-agricultural business. In India, one estimate puts the number of urban poor who are self-employed at 40 per cent. Most rural farmers in developing countries also fall within the definition of micro-entrepreneurs. For these reasons, the percentage of entrepreneurs in the population is substantially higher in developing countries than in developed countries. For example, Bolivians engage in entrepreneurial activity at three times the rate as Americans, and five times the rate as those in the UK.


Eking out a living


Entrepreneurs in low-income countries are mostly small, and they often operate informally. In contrast to the successful serial entrepreneurs featured in business magazines, many among the world’s poor are parallel entrepreneurs, in the sense that they start, own and operate multiple businesses at the same time. In The Wealth of Nations, Adam Smith famously evoked the self-interest of the butcher, the baker and the brewer to describe the logic of capitalism. Today, a reasonable argument can be made that our own self-interest lies in better understanding microentrepreneurs, for at least three reasons:


We see three key obstacles to the economic advancement of micro-entrepreneurs:


While each of the problems above — in access to information, access to skills, and access to money — seems daunting, there is much cause for optimism. New technologies and business models — dreamt up by innovators within firms large and small, indigenous and multinational, profit and non-profit, governmental and non-governmental — are offering means to unlock the potential for growth. They are building the “soft” infrastructure necessary to drive inclusive growth across the world.


On the skills front, exciting initiatives to deliver low-cost, scalable means of teaching business are now underway. For example, Michael Hay of London Business School is leading the Business Bridge Initiative, which offers access to high-quality business education at low cost on a global scale. Business Bridge combines online learning with face-to-face tutoring by trained business school alumni, delivered through a network of local hubs. Having trained a range of entrepreneurs in South Africa and Ghana, Hay and his colleagues plan to soon introduce the initiative elsewhere.


There is even some preliminary evidence on the enormous gains to be had from such training. Dean Karlan and Martin Valdivia conducted a rigorous experiment wherein they provided basic business training to a set of Peruvian female microentrepreneurs. They found that relative to a control group that received no training, micro-entrepreneurs who received basic business training significantly improved revenues and practices. Interestingly, the highest gains went to those micro-entrepreneurs who, before the experiment, were least interested in the training programme!


Even stronger effects, albeit not at the micro-entrepreneur level, are reported by Nicholas Bloom and his colleagues, based on an experiment conducted by them on a set of mediumsized textile firms in India. They find that even basic education in concepts such as inventory management and quality control produced “startling” effects on productivity and profitability.


On the information front, access to the internet and to specially tailored content via mobile and wired broadband holds great promise. Reuters Market Light is an initiative that provides weather, crop related and marketing information to farmers through text messages sent to their mobile phones. Farmers now report using this information to decide on when to plant seeds, when to harvest and how best to market the produce (including such sophisticated actions as selling soybean produce early because of an anticipated glut in world markets). Preliminary results from work in India by Chris Parker, Kamalini Ramdas, and Nicos Savva suggest significant gains to farmers using the service.


One of the clearest demonstrations of the transformative power of access to information for micro-entrepreneurs is a pioneering study by Robert Jensen on fishermen in the coastal state of Kerala in India. He found that within a few months of the availability of mobile network coverage in the fishing communities he studied, about 80 per cent of all fishermen had purchased mobile phones. And these fishermen were using mobile phones as tools of business — they would communicate with contacts at each fish market while still at sea, and bring their catch in to the markets that offered the best prices. Prices became much more uniform and predictable, and fishermen’s profits increased on average by eight per cent, even as consumer prices declined by four per cent. Dumping of unsold fish (which averaged five to eight per cent of daily catch before mobile phones) was eliminated because buyers and sellers found each other more efficiently. Perhaps inspired by these findings, an NGO based in the southern Indian city of Chennai has launched a programme called Fisher Friend to provide free mobiles and free information to fishermen.


While mobile devices are the leading edge of the trend toward access to information, the more “traditional” computer-based access to the internet continues to see innovative models. The IT landscape of the Indian state of Kerala — the site of Jensen’s famous fishermen study — is now being transformed thanks to access to the internet via thousands of internet kiosks (called Akshaya Centres) distributed Entrepreneurs in lowincome countries are mostly small, and they often operate informally. throughout the state and via a statewide training drive by the IT authorities there. “Almost every household in Kerala now has at least one member who is internet-literate,” says Ajay Kumar, until recently IT Secretary in the Government of Kerala. The Akshaya project, which is a publicprivate partnership between the Kerala government and small entrepreneurs, has now spawned thousands of internet-based businesses that offer services ranging from VoIP telephony to computer-based English lessons to online astrology readings.


Insights from the Kerala experience are relevant to the African nation of Rwanda, where an even more dramatic information-based transformation is taking shape. Rwanda’s leaders have embarked upon a plan to take the nation directly from an agrarian economy to an information-based economy, leapfrogging the manufacturing stage of development that most countries in the West went through. Rwanda is in the midst of a nationwide broadband access initiative that involves, among other things, putting down fibre optic cable throughout the country, with the hope that entrepreneurs will use this network to create information-based businesses.


On the money front, initiatives such as M-Pesa, the mobile money service introduced in Kenya in 2007 by Safaricom, the local affiliate of UK-based Vodafone (see sidebar) have resulted in almost 50 per cent of all economically active individuals using their mobile phones to transact money, with very few of these individuals having access to formal bank accounts. Similar efforts are on in many countries, such as India, Afghanistan, Tanzania and Haiti, where a number of technology and financial service providers are vying to offer low-cost, mobile-based means of saving, sending and spending money. How many of us would have thought of Kenya as a hotbed of innovation in financial services, and an inspiration to so many entrepreneurs around the world? Who would have thought that shackbased businesses in Kenya would have easier access to banking services before garage-based businesses in Silicon Valley?


Until recently, much of the focus with respect to access to money for micro-entrepreneurs was on microlending. Thanks to the Nobel Peace Prize winning efforts of Muhammad Yunus and others, millions of microentrepreneurs have received small loans that have helped them in a million different ways — tiding over crises, investing in equipment, building new businesses, etc.


Interestingly, initial results from the impact of M-Pesa in Kenya seem to suggest that when micro-entrepreneurs have a choice between M-Pesa and traditional micro-finance, they overwhelmingly prefer to borrow using M-Pesa. And the reason is not just the convenience of receiving money over the phone. Micro-entrepreneurs seem to vastly prefer borrowing from friends, family and acquaintances. Mobile money networks such as M-Pesa also serve as peer-to-peer platforms that allow borrowing, lending, spending and investing via existing social and commercial networks.


A glimpse of the future?


Although the direct beneficiaries of these initiatives for access to skills, information and money are the microentrepreneurs involved, these efforts are of keen interest to a range of other parties as well. Initial results from Kenya suggest that the children of these direct beneficiaries benefit from a greater share of household expenditures being allocated to education expenses. As they grow, micro- entrepreneurs may employ others from the community who prefer steady jobs to the uncertainty of owning one’s own business. Customers of micro-enterprises — whether in the local community or in lands far away — might become the beneficiaries of improved goods and services. Banks might find that businesses they previously ignored are now quite attractive as customers. Suppliers might find not only their sales volumes going up, but also the likelihood that they get paid for what they sell. And as microentrepreneurs grow and throw off the “micro” qualifier, they are more likely to join the formal economy, and contribute more actively to their nation’s tax base.


So the next time you walk into a market in a developing economy, look past the noise, the crowds and the seemingly timeless activities that accost your senses. What you might see is a world in transition. And if initiatives to remove the biggest impediments confronted by micro-entrepreneurs are successful, you could be looking at the wheels of progress accelerating before your eyes.