How AI is advancing across the world map

National strategies for artificial intelligence vary considerably. What are the global implications of different countries’ approaches?

Abhijit Akerkar
Innovation Technology Strategy
Save to my profile

Artificial Intelligence (AI) has gained geo-strategic importance. Russian President Vladimir Putin asserted that whoever became the leader in the field would rule the world.

Countries are jostling to stay ahead of the game. China, UK, France, Germany, Finland, Canada, Japan, South Korea, India, Singapore, Mexico, Kenya, Tunisia, and the United Arab Emirates (UAE), among others, have released national plans to promote the development and use of AI. They are very different, each building on the country’s strengths. Only a few, such as China and France, have evolved strategies.

The rest, including the EU, have published guidelines but have yet to make specific policy announcements. The UAE is the first country in the world to institute a Ministry of Artificial Intelligence. How do these countries’ strategies compare? And what are the implications for the world? I have selected six countries with very different approaches which will have a significant impact outside their national boundaries.

Distinctive characteristic Defend the lead; private sector the envy of the world

Statements from a one-page fact sheet released by the White House and the speech by Michael Kratsios, Deputy Assistant to the President for technology policy, that set the tone for the national strategy:

Statements from the ‘AI Sector Deal’ and the House of Lords report that set the tone for the national strategy:

Statements from the report published by the task force led by Cédric Villani, mathematician and member of the French Parliament, that set the tone for the national strategy: 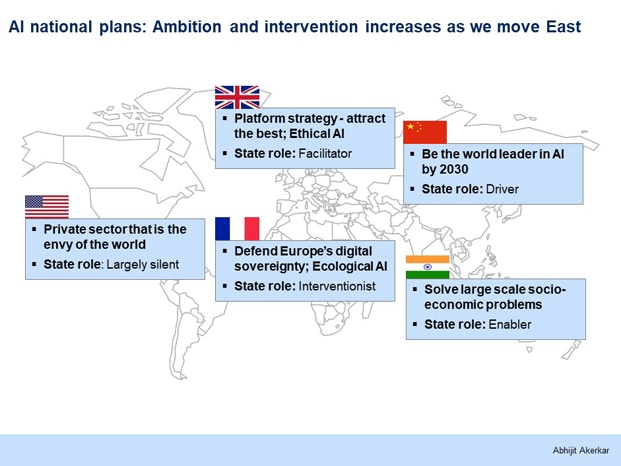 Statements from the National Strategy for AI published by NITI Aayog, the policy think-tank for the government, that set the tone:


Distinctive characteristic Goal to dominate the AI world by 2030 through a potent mix of capability, capacity and strategy

Statements from the Next Generation Artificial Intelligence Development Plan that set the tone for the national strategy:

Statements from the Artificial Intelligence Technology Strategy report published in March 2017 by the Strategic Council for AI Technology led by Yuichiro Anzai that set the tone:

One country not included above that we need to keep an eye out for is Germany, which is expected to publish its AI strategy at a Digital Summit in December 2018. Germany’s federal cabinet released a paper in July 2018 that outlines the goals of the strategy. In short, the focus is “AI Made in Germany” i.e. expand German and European research in AI and transfer research results to the private sector for creating AI applications.


How will these plans change the world?

Rebalancing of tech power across nations:

Despite very different national strategies, all countries agree on the need for ethical AI and for ensuring that all their citizens are onside. This commonality of vision gives cause for cautious optimism that nations will unite to keep rogue actors in check.


What every CEO needs to know about AI. Part one: growth