Stefan Thau
Organisational behaviour
Save to my profile 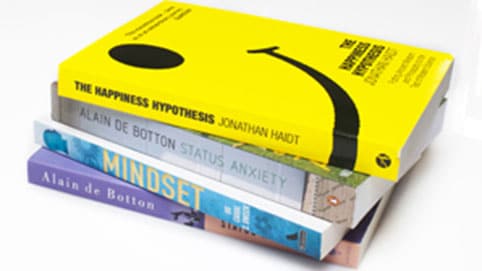 Focusing on the more positive aspects of behaviour, however, he offers his choice of books that can contribute to personal awareness and success.

While most of us believe we know what — precisely — will make us happy, Gilbert shows us that the ways in which we anticipate our future feelings often results in poor decisions. With a humorous and accessible writing style, incorporating psychological research and his own insights, he makes a number of surprising revelations about the ways in which we realise and fulfil our personal happiness. A winner of the Royal Society Prize for Science Books, Stumbling on Happiness aims not to literally increase one’s happiness by having read it but to increase the reader’s awareness of how his own mind works. 277 pages, Harper Perennial, 2007

Examining beliefs and philosophies from numerous timeless cultures, Haidt describes the ancient concept of happiness and how it applies to modern society. Using philosophy, comparative religion and psychology (from Jesus to Buddha to Sophocles), he looks at early thinkers as well as contemporary science to illustrate how being happy will improve your life on all levels of mind, body and soul. With an engaging writing style, this academic has created a pop culture masterpiece that might, perhaps, bring a little more happiness into your own life. 297 pages, Arrow, 2007

3.  Influence: The Psychology of Persuasion Robert B. Cialdini

This classic work is the result of Cialdini’s many years of research and study on the subjects of persuasion and influence. He provides many anecdotes about the skills of persuasive people (and his six universal principles of influence and persuasion). He also balances a discussion of the ethical ways to use persuasion skills while also presenting the tactics of how to defend oneself against them. Consequently, this book is useful for anybody who wants to learn about influence. In our hyperactive, media-saturated culture, it becomes increasingly difficult to distinguish authentic information from data that has had a spin put on it. When we have a better base of knowledge of what motivates us, Cialdini contends, we are better able to turn a distinguishing eye towards the influence of others. 336 pages, HarperBusiness, 1st Collins Business Essentials edition, 2007

4.  The Age of Propaganda Anthony Pratkanis and Elliott Aronson

Propaganda might be defined as presenting information in a manipulative way in order to achieve a desired result. This book presents the history of propaganda, how it influences us (and how we act as a result) as well as which techniques are the most effective. The authors look at the tactics of everyone from televangelists to political candidates to everyday advertisers in the light of current social psychology. They also include and analyse events in the news at the time of publication and offer tips on how to guard oneself from nefarious techniques of unscrupulous propagandists. 432 pages, Owl Books, 2004

5.  Is There Anything Good About Men? How Cultures Flourish by Exploiting Men Roy F. Baumeister

Are women genuinely oppressed? Over time, has the relationship of men and women been more antagonistic or cooperative? Have the gender gaps between men and women today truly been reduced? Baumeister investigates these, and many more such questions, as he examines men in contemporary America. He posits that over the years, men have both benefitted from and been hurt by the cultures they have created. Using multiple disciplines as a lens of examination, he achieves a balanced scrutiny of gender differences. 320 pages, Oxford University Press USA, 2010

6.  How We Know What Isn’t So: Fallibility of Human Reason in Everyday Life Thomas Gilovich

In our efforts to predict how the world works, we often fall victim to stereotypes, biased thinking and other errors of reasoning. Why do we continue to believe what isn’t true? Isn’t everyone entitled to his own opinion? Gilovich cites numerous examples of how mistaken thinking can actually cause us harm (such as hunting animals to extinction through a belief in medicinal cures) and goes on to examine common incorrect beliefs, such as the ‘winning streak’. He asserts that knowing our propensity towards these errors is the first step toward a greater understanding of how and why the brain distorts our perceptions. To sharpen your critical reasoning and thinking skills, take a look at this book. 224 pages, Free Press, 1993

Fiske and Taylor are both professors of psychology, but they have managed to write a scholarly text that is both reader-friendly and engaging about the field of social psychology. They discuss recent advanced research in social neuropsychology, mainstream experimental social-cognitive psychology and cultural psychology as well as the current research findings on social cognition. They share their perspectives on current issues in the field and look to its future development. For those with an interest in this subject, this is the book to read. 672 pages, McGraw-Hill Higher Education, 2007

Power takeovers. Tactical coalitions. Psychological attacks. Social organisations. Is this a business book? Lauded for its study of captive chimpanzee society, Chimpanzee Politics has much to tell anyone who is struggling in business, politics or any other competitive arena. De Waal presents a study of chimpanzees’ social relationships as they evolve and how primates socialise to get what they ultimately want. The lessons from your lost relatives might be the most useful ones you’ve learned in a long time. 256 pages, Johns Hopkins University Press, 25th anniversary edition, 2007

This renowned psychologist explores a new line of thinking: what if our mindset is what determines our success, rather than our abilities, skills and circumstances? She explores the idea of a ‘fixed’ mindset (one reinforcing the idea that intelligence is static) and of a ‘growth’ mindset (one focused on perpetual improvement and learning) and asserts that instilling children with a growth mindset will greatly aid them later in life. She notes that a fixed mindset can be altered, allowing a person to gain more insight into what he or she can ultimately become. With an easy-to-read style, this book is of benefit to parents, teachers, coaches and anyone else involved in a personal relationship. 288 pages, Ballantine Books, 2007

Noting that every person is susceptible to the thoughts and judgements of others, the author explores the subject of what he terms ‘status anxiety’. Where it stems from, how it can be overcome, and why physical things cause such anguish — these interesting topics are the gist of this book. De Botton includes examples of some of the world’s greatest thinkers — writers, artists, philosophers and leaders — and what techniques they used to develop their confidence. Without directly offering instruction, the author guides the reader, using  a conversational writing style, and evokes deep personal thinking. Delightful for a quick read-through, this book only gets more insightful with slow analysis. 320 pages, Penguin, 2005