"We’ve got lots of small businesses and they’re all connected by the fact that they’re here.”

Stuart Crainer
Sustainability Family business
Save to my profile

"We’ve got lots of small businesses and they’re all connected by the fact that they’re here. Some take up more time than others, but we’re passionate about all of them and they all matter because they’re all part of our history.” 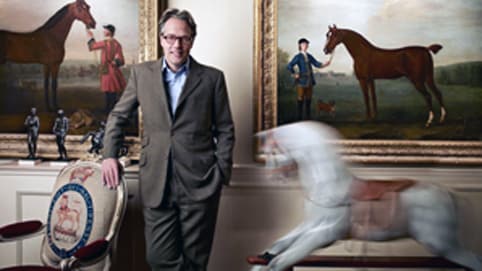 Charles Gordon-Lennox, Earl of March and Kinrara, leads a unique family business.  He runs the 12,000-acre Goodwood Estate in the Downs of West Sussex.  It is quintessentially English with gently rolling hills and Regency splendour. Goodwood House, originally built in the 17th Century and enlarged in the 18th Century, is home to paintings by Stubbs and Canaletto among many others.


Lord March took over running the estate in 1994.  He was aged forty, as his father had been when he was handed the reins of the estate.  March had worked successfully as a photographer in advertising after leaving school.  His first job was working with legendary film director Stanley Kubrick. Watching Kubrick at first hand he saw that success did not need to be accompanied by compromise.

In the early 1990s, Goodwood’s prosperity was largely based around its horse racing activities.  Its annual summer race meeting, Glorious Goodwood, is one of the fixtures on the English sporting calendar.  Historically, Goodwood had also been home to motor racing, but its track closed in 1966.

Back to the future


With large overheads and only periodic income, Goodwood faced a commercial dilemma as classic as its own architectural lines. Lord March’s response was equally classical: to diversify, but to do so in keeping with Goodwood’s traditions. It is a continuing and delicate balancing act.

Motor racing returned to Goodwood. Its Festival of Speed, held in July, describes itself as “the largest motoring garden party in the world”.  Past and present Formula 1 stars race a variety of cars old and new.  And, since 1998, in September there is the Goodwood Revival which takes spectators back to the racing world of some fifty years ago.  Vintage cars race while 140,000 spectators enjoy themselves dressed in suitably vintage finery.

To this heady petroleum mix, Goodwood has added a steadily increasing number of events and extensions.  There is, for example, a Goodwood Breakfast Club where car aficionados assemble, show off their cars, inspect those of others, and enjoy breakfast from the Goodwood farm. There are a host of other race days, track day experiences, corporate track days, events for young drivers and so on.


In addition to the growing number of motor racing-themed initiatives, Lord March can point to a host of other diversifications which have helped boost the estate’s turnover from £8 million to more than £60 million. Goodwood has a 94-room hotel, a 3,000-acre organic farm (the largest of its type in the UK), golf courses, a private member’s club, a health club and its own aerodrome.

“We’re like a little conglomerate in some ways,” says Lord March. “We’ve got lots of small businesses and they’re all connected by the fact that they’re here. Some take up more time than others, but we’re passionate about all of them and they all matter because they’re all part of our history.”

The latest development is Goodwood Sport and Racing (GSR) with Belstaff. This brings together the Goodwood brand with that of the fashion company whose jackets have been worn by Che Garvara, Steve McQueen, Brad Pitt, Ewan McGregor and others. The first GSR by Belstaff collection is now available online and through Belstaff’s London store and at Harrods.


For Lord March the changes in his role have been equally significant over the last twenty years. As Goodwood has diversified, his skills have also had to. “Initially, I did a lot of the work myself. Now, we have 560 people and it’s a wildly different business open throughout the year,” says March. “We’re very lucky people love coming here. They feel very attached to the place and I don’t want them to be disappointed. I hope I can pass that enthusiasm onto the team. I’m trying to pass that baton of leadership to my senior team at the moment. I see that as part of my function. We’re not going to grow if I’m running the business all the time; they need to run the business.”

As a family business, he admits that “it is very personal, but it’s great if people feel very engaged and very connected. It’s more about trusting people”.

Lord March, with his background in advertising and his enjoyment of speed, has more in common with the gung-ho entrepreneur than the steady pilot of organisational growth. “I like things moving fast and I like things to happen quickly,” he observes. But, Goodwood is increasingly matching its flair for smart diversification with a faith in performance metrics. “We set ourselves some big targets in terms of improving margins. Our problem is we’ve got a massive fixed cost – just to keep the lawns mown everyday, to keep the place alive and well -– and we’ve got to generate enough cash to invest because the estate’s a hungry animal. If we’re not making a decent margin, we’ve got a real problem.”

March and his leadership team use a range of Key Performance Indicators which look at all elements of the very varied Goodwood business mix. These are published each week. “My CEO, CFO and I use them very much as a storyteller, giving us clarity on what we can expect to see coming through the management accounts each month. In this way our management accounts become a confirmation of performance with any surprises either highlighting an issue in the KPI assumptions or in the delivery of revenue to profit. Both get investigated,” says March.

Beyond that, CEO Alex Williamson and he have a single sheet of information which captures Goodwood’s six key focus areas for the next three years. Says March: “We believe these are the areas that will deliver the growth we are looking for and so we really monitor them closely. Much of the information is about projects rather than being directly financial. As we already believe in the potential return on investment from a particular project, it really is about delivery.”


Of course, other great estates have made the leap from cash consumption to the production of profits – Longleat with its safari park; Blenheim and Chatsworth (with a mere 1,000 acre park) into all-year historical attractions. What differentiates Goodwood is its sheer range of activities and its willingness to imaginatively develop its heritage. Everything at Goodwood is authentic to the place and so feels relevant and connected – not something that has just been made up for commercial reasons. It all feels real, but often with a twist. Its Revival event is elevated by the wearing of fancy dress. Summer horse racing is now followed by DJ sets from artists like Rudimental which mean that 20,000 people carry on partying – and spending – long after the last horse has left the winners’ enclosure. Contemporary meets history.

Lord March points to Rolls Royce as an inspiration. Goodwood developed a relationship with BMW through the Festival of Speed.  When BMW took over the production of Rolls Royce cars it became a Goodwood tenant.  Now, the Goodwood Estate is home to a 22,500 square metre factory, employing 800 people, producing Rolls Royce cars. The £60 million building was designed by Sir Nicholas Grimshaw and features 400,000 trees and landscaping and design so environmentally sensitive that the factory cannot be seen from the road.

“It’s very inspiring seeing a great British product, a brand that’s really got itself back together,” says Lord March before drawing parallels with the transformation of Goodwood. “I’m excited by technology and enjoy the modern world. Our aim is to take our heritage and use it, to make Goodwood relevant in a modern world – it’s a really exciting and vibrant place – in no way musty or stuck in the past.” The revival continues.