Girl Effect: What social change means, and why it matters

Normal. What is that? When a girl in poverty turns 11 or 12, her future is mapped out for her – she will likely marry young. Almost 750 million of today’s women and girls worldwide were married before reaching their 18th birthday.

Child marriage often results in early pregnancy. According to the Human Rights Advocacy Centre, 14% of girls aged 15–19 in Ghana are already mothers. If a girl marries at, say, 13 and is pregnant by 14, she may experience a downward spiral of social isolation, limited opportunities and domestic violence. Forget long-term aspirations. Expectations are low: 84% of Ethiopian girls, for example, do not attend secondary school.

Girl Effect is a creative non-profit designed to empower vulnerable and marginalised girls to transform their lives. The NIKE Foundation, which supports charities and non-profit organisations to make change in communities globally, launched Girl Effect more than a decade ago. When the organisation became independent from the foundation in 2015, Farah Ramzan Golant, former leader of Britain's largest creative ad agency Abbott Mead Vickers BBDO, took up position as the first chief executive. Girl Effect’s aim, in 2020, is to inspire more than 350 million people to drive social change and engage 30 million individuals in its work.

You went from being a daughter in your father’s home to a wife in your husband’s home overnight.

How? First, by building youth brands and second, by riding the wave of digital transformation. Girl Effect has founded locally-rooted youth brands that include country-specific events, magazines and radio shows, encouraging girls in places such as Ethiopia and Rwanda to stay in school, build their confidence and say no to underage marriage. Ni Nyampinga, the first youth brand in Rwanda made for girls, by girls, offers an example. It’s one of three brands that tap into the cultural fabric – the others are Yegna in Ethiopia and Zathu in Malawi. Over six years, Ni Nyampinga has given girls access to positive, educational and entertaining content through media, music and mobile. The brand has given a voice to communities – and transformed adolescent girls into catalysts for change.

Ramzan Golant says: “Ni Nyampinga is anchored in the country. Its very visceral meaning more or less translates as ‘a girl who is beautiful inside and out, who makes wise decisions’. The Rwandese brand taps into a country in a post-genocide environment where the notion of adolescence and youth was all but lost. You went from being a daughter in your father’s home to a wife in your husband’s home overnight. So, through drama, music and writing, it showcases women who are forging new pathways and careers.”

Girl Effect's recent reach and impact assessment proves how its distinctive branded-media approach is unlocking potential: 500,000 girls aged 10–19 have consumed Ni Nyampinga radio or magazine, with 66% saying the programme has had a marked impact on their confidence.


Watch one girl share why Ni Nyampinga acts as a bridge to help her pass into the future.


In Nigeria alone, 6.3 million girls are out of school. Under militant group Boko Haram’s terrifying stronghold, video messages aimed at the government are periodically released. In one chilling video, for example, 300 schoolgirls kidnapped by the group’s men were filmed as militant leader Abubakar Shekau vowed to “sell them in the market”.

Reaching these girls is one of the world’s most urgent challenges. Girl Effect is tackling it head-on by exploiting digital transformation, debunking myths and disrupting outdated norms. For instance, through its Technology Enabled Girl Ambassadors (TEGA) programme, it connects girls in hard-to-reach communities through mobile. Giving girls mobile phones helps keep them safe and challenge values peddled by the likes of Boko Haram. This tool does more than offer a window into the girls' lives; it delivers data about their world in real time.

TEGA uses mobile technology to teach girls aged 18–24 how to collect data and document their surroundings – for example their living conditions. The data they collect can be mined within 15 minutes of being uploaded. Mobile affords the girls a level of safety that can’t be reached with a “western adult showing up on her doorstep”, notes Ramzan Golant. “We couldn’t have boots on the ground so we created a mobile app to train girls in poverty to become data gatherers.

“Everybody said it couldn’t be done. Everybody said, ‘You’re insane, you’re crazy if you think you can put mobile devices in the hands of girls living in poverty and keep them safe with their mobile phone’.” But Ramzan Golant and the not-for-profit have.
Girl Effect was inspired by the likes of Snapchat and banking technology to ensure the TEGA app keeps data safe. TEGA has been recently recognised by MIT as an example of a lean research methodology, and won a host of awards including Fast Company’s Innovation by Design Award. What started as a pilot project became something much bigger. TEGA provides the enterprise and its partners peer-to-peer insights in Nigeria, Malawi, Rwanda, India and the US.

Girls are recruited and trained to become qualified qualitative and quantitative interviewers. Using bespoke mobile technology they conduct surveys, collecting data, video, photo and audio content. “As anyone who has an adolescent daughter knows, girls will tell other girls something they simply will not tell a white man with a clipboard,” says Ramzan Golant. What’s more, the girls are paid for their help, breaking a cycle of economic disempowerment.

TEGA has been so effective that it’s being scaled across the world. Girl Effect predicts that by 2020 more than 300 TEGAs will have reached hundreds of millions of girls. True insight into the lives of children in hard-to-reach communities will be instrumental in helping governments, NGOs and the private sector pave a way forward.


From private sector to non-profit


Ramzan Golant may not have spent her formative years in the developing world, but she now leads the charge in empowering vulnerable girls to reach better services and life opportunities. She brings her deep and diverse experience to bear.

Ramzan Golant made her name as CEO of the biggest ad agency, Abbott Mead Vickers, where over 22 years she mastered the elusive art of being her best self. “If someone had said, ‘Farah, you’re going to spend 22 years of your professional life in one place’, I would have laughed rather loudly,” she admits. “But I did because it was a very dynamic culture. When I started, the agency was run by three incredible men whose whole ethos was about friendship. It wasn’t about crunching the numbers, but worrying about being the best version of you.” It was a team she could laugh and cry with, she says.

At Abbott Mead Vickers, Ramzan Golant was, among other things, a brand architect – she worked on ads for giants such as Walkers, Pepsi and Mars. In other words, she may not have previously worked in business for development, but she had transferable skills, and intense knowledge of creating successful brands.

In 2014, Ramzan Golant became CEO of the UK's largest independent television company All3Media. She recalls subtle team rituals, such as coming together at the beginning and end of each week to admit mistakes and celebrate successes. “Culture,” she says, “is built on truth and truth is built on action and ritual.” She was revered for leading the sale of the company to Discovery and Liberty Global for US$687 million (£507 million).


“We can be a little voyeuristic when it comes to major global challenges,” says Ramzan Golant, who is big on action, not “white noise”. “We need more organisations to allocate capital to programmes; we don’t need more ticks in the diversity and inclusion box.”

She points to the winner of the 2017 Glass Lion Grand Prix at the Cannes Lions Festival of Creativity. State Street Global Advisors commissioned “Fearless Girl”, a defiant statue – with her head held high and her hands fisted at her hips – positioned on Wall Street to address issues of gender inequality. 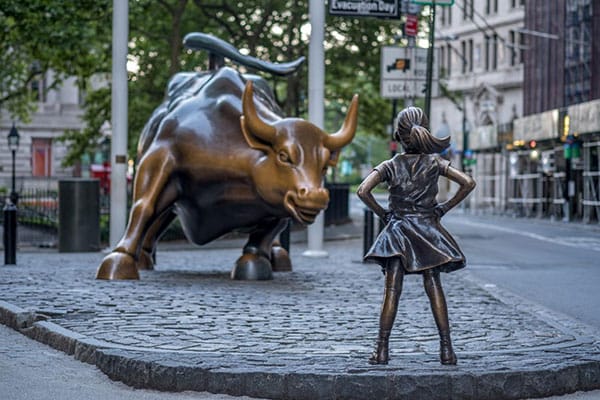 The firm sent a letter to 3,500 companies, urging them to increase the number of women on corporate boards. People flocked to the statue; it was a selfie icon and #fearlessgirl became one of the most talked about marketing campaigns in 2017. Mexican beer brand Tecate offers another example of a brand taking action, notes Ramzan Golant. Tecate picked up a Gold Lion at the same festival for its film ad that inverted the clichéd view of manliness to raise awareness of domestic violence.

“A great boss of mine used to say, ‘You need to know what you stand for. Stand for something or you’ll fall for anything.’ These are case-studies of very unlikely businesses that took a point of view,” she says. “Businesses today are judged – by a workforce, consumers and alumni – for what they stand for. Yes, we’re in business to do business, but values rather than just value is really important.”


Social affinity is arguably a brand’s most powerful force. But how do you measure impact when engagement means re-envisioning new behaviours and mindsets of entire communities? Ramzan Golant draws on her private-sector experience to measure Girl Effect’s culture brands.

Four elements – knowledge, attitudes, behaviours and norms (KABN) – are closely monitored. “KABN is our religion. We’re accountable to our investors,” she says. Notice the words – investors, not donors, because “there’s no return on an investment but there is a return on impact”.

It’s relatively early days for the independent Girl Effect. Still, the impact is already far-reaching and it won’t be long before it starts to think about alternative revenue streams for its brands through partnerships. “We’re clear that we will only align with organisations with social outcomes in their core DNA.”

If Girl Effect can realise its mission to touch 100 million people by 2020, millions of girls’ lives will transform. Girl-powered youth brands, interactive technology that connects girls to knowledge and networks, and pioneering peer-to-peer mobile research has positioned Girl Effect uniquely as an organisation that can make a real difference. “In other words,” says Ramzan Golant, “we provide hope at scale.”

serpzen 5 years and 4 days ago