Unreasonable people are your greatest assets

There are many examples of unreasonable people in the world of business.

It doesn’t matter how perfect the conditions favoring innovation are, you still need someone to take the initiative, to grab the opportunity when it becomes possible.

This article is provided by the Institute of Innovation and Entrepreneurship.

Take a look at the chart below – it documents the changes in the men’s high jump world record over a one-hundred year period. As in other sports, high jumpers have become taller, stronger and fitter, and they have improved their techniques. But what happened in the early 1960s, when the bar was raised no less than seven times? What caused this dramatic improvement in jumping prowess? 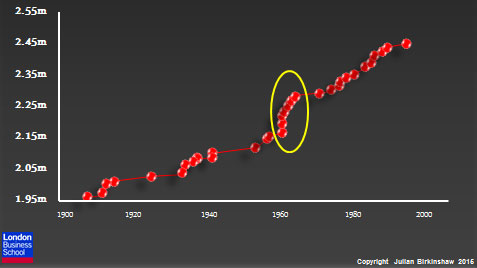 Everyone knows that truly disruptive innovations of this type need a maverick inventor – someone who likes to flaunt conventional wisdom, think outside the box, and challenge the status quo.

Most well-informed people would guess “The Fosbury Flop” – the technique for high jumping pioneered by the American jumper Dick Fosbury, where you leap over the bar backwards, head first, rather than straddle it chest-first. Most of us are acquainted with this story, and it seems to fit the facts. New techniques lead to dramatic performance improvements, right?

Except that Fosbury is actually the wrong answer. The succession of world record jumps in the early 1960s were in reality the work of two relatively-forgotten jumpers, John Thomas from the USA and Valeriy Brumel from the USSR, both masters of the “old” style of jumping – the Straddle Jump. Dick Fosbury wasn’t even competing at an elite level at this point. Indeed, Dick Fosbury never held the world high jump record.

When we first saw this data, we fell off our chairs, metaphorically speaking, because it seemed to invalidate our long-held beliefs about how innovation improves performance. But we dug a little deeper, and ultimately we made sense of what was going on. In fact, the implications of this story, for any aspiring innovator, are more interesting and surprising than you might expect.

In the early 1960s, at the height of the Cold War, Thomas and Brumel arrived on the world athletics scene. Thomas broke the world record three times while still only 20 years old. Brumel subsequently broke the record a further four times. Their head-to-head rivalry culminated at the 1964 Tokyo Olympics, where both jumped the same height, but Brumel won the Gold Medal because of fewer failed jumps. Both men, to repeat, were using the Straddle Jump – the established technique where you leap off the inner foot and cross the bar, face down, with your legs straddling it.

So what happened to Dick Fosbury? At the time of the Tokyo Olympics, he was a seventeen-year-old engineering student at Oregon State University, and a promising but by no means world-class athlete with a personal best some 28 centimeters below Brumel’s record. Despite the “dire warnings” of every coach he worked with, Fosbury persisted with a new style of jumping, taking off on the outside foot and immediately turning his back to the bar, leaping head-first and then kicking his legs up as his back cleared the bar.

No-one knows exactly what inspired him to try this new technique – it certainly wasn’t his coaches, who tried to steer him back to the Straddle Jump. One thing in his favor, though, was that his high school was one of the first to install large foam mats for landing on, making a head-first jump somewhat less dangerous. In any case, he persevered, and despite all the criticism he continued to improve and by the mid-1960s he was good enough to make the US national team.

Meanwhile, Valeriy Brumel had become the undisputed number one, but disaster struck – he had a motorbike accident, breaking his right foot and leg in multiple places. Following a lengthy series of operations he was able to walk again, but his professional jumping career was over.

It was this twist of fate that opened the door for Dick Fosbury. Brumel did not compete in the Mexico City Olympics in 1968, so Fosbury lined up against all the other athletes, every one of them using the established straddle jump, and beat them all with his crazy backward jumping technique. Suddenly, Fosbury was the star of the show – “Fearless Fosbury Flops to Glory” was the New York Times headline in October 1968.

But even with the Olympic Gold Model in the bag, Fosbury’s story isn’t complete. His winning jump was still below world-record height, and indeed Fosbury never actually broke that record. Over the next decade, the world record was beaten several times by other athletes, some using the Fosbury Flop, others using the Straddle Jump. It wasn’t until the 1980s that the Fosbury Flop finally became established as the technique-of-choice for serious jumpers.

Even though it has been told a hundred times before, we think it’s useful to revisit the Fosbury Flop story to show just how “messy” the process of innovation is in real life. Everyone knows that truly disruptive innovations of this type need a maverick inventor – someone who likes to flaunt conventional wisdom, think outside the box, and challenge the status quo. Fosbury was indeed such an individual. But if we want to capture the real essence of the story, we have to roll a few other important points into the mix.

First, it took several years of unheralded effort from Fosbury – no-one took him seriously at first, and all along the way people were advising him to switch back to the conventional way of jumping. Second, the timing of his innovation was good – thick landing mats had just become available, making a head-first jump safe for the first time. Third, he got a lucky break when Brumel had his accident, and he duly seized the opportunity. Finally, Fosbury’s breakthrough wasn’t the end of the story at all – it took many years, even after the gold medal, before the merits of Fosbury’s innovation became clear.

Put it all together, and you can see why game-changing innovation is so hard. It is tough for the Dick Fosburys of the world. And it is extra hard for the big organizations, which have to fight against their own corporate legacies as well as the entrenched norms of the marketplace.

And before we move away from the world of sports, let’s not forget that plenty of innovative new techniques and theories fail to take off. For every Dick Fosbury with a “smart-stupid” idea that worked out well, there are plenty of long-forgotten individuals whose ideas were in the “stupid-stupid” category. Fosbury’s coaches weren’t just stuck-in-the-mud traditionalists; they were also drawing on their experience of seeing other athletes trying and failing with different techniques.

The power of unreason

It doesn’t matter how perfect the conditions favoring innovation are, you still need someone to take the initiative, to grab the opportunity when it becomes possible. Dick Fosbury was the agent of change in the world of high jump. He was the quintessential unreasonable man, as portrayed in the famous George Bernard Shaw quote:

There are many examples of unreasonable people in the world of business. Steve Jobs was famous for operating in a “reality distortion field” that allowed him and Apple to conceive truly path-breaking designs. Elon Musk is often credited with a similarly-skewed worldview: "If you believe a task should take a year then Elon wants it done in a week, he won't hesitate to throw out six months of work because it's not pretty enough or it's not 'badass' enough. But in so doing he doesn't change the schedule”. And it’s not just top executives or visionary founders who exhibit this type of unreasonable world view.

Over the last twenty years, we have worked with many mid-level executives who have persisted with championing their bright ideas, often without any encouragement at all, and often taking a significant amount of career risk along the way.

Being unreasonable is not a function of your hierarchical position – it is a state of mind. Over the years we have come to realize that some people are just more unreasonable than others. Of course it isn’t a binary thing – we all exhibit various shades of unreasonableness, with mavericks like Jobs and Musk on one end of the spectrum, and the rule-following civil servant or boy-scout on the other. But regardless of how much of that unreasonable gene you were born with, the ability to use it in a smart way is a lot down to skill and experience.

In a future post, we will offer some tips on how to become more unreasonable – but in a reasonable way.

Do you know any unreasonable people who have shown enormous tenacity and stubbornness in pursuing an idea, despite constantly being told to drop it? If yes, nominate them for ‘The George Bernard Shaw Unreasonable Person’ category under the Real Innovation Awards.

This blog is based on ideas presented in our forthcoming book, Fast/Forward, to be published by Stanford University Press in February, 2017.

This post is very appropriate to me, for years I have been the disruptive innovator and wondered why. Thinking outside the box and developing new ways of doing things to create a better and more effective work place is natural to me, but others find it inconvenient. I would be interested to find another way to achieve my goals without resulting in upsetting the apple cart or alienating others just because they don't get it. This post helps me understand my place as I always thought I was the bad guy and holding down a job was always difficult.

Yes, thinking outside the box is fine, though the secret is implementation: If you want to go in X direction, I will design the path, figure out how to minimize the risk, coordinate the proper people, apply appropriate business principals, hone, adjust, be the Evangelist, lobby, and do .... to guarantee your success and the success of your program. And so far in my career I have wild success. I never saw such as being unreasonable though. perhaps, just a process of taking on something more often than not an exceptional challenge. I will say though that some of my greatest victories have been via achieving goals of someone who is challenging. I cannot tell you the number of people who have said they have no clue how I could work for THAT person or .... , though they put me to the task and .... What I see is that often I fill in their missing blanks and visa versa.

Great theme and very good points. I fully agree. Specially in the Pharmaceutical Industry and in other R&D oriented businesses you will find this theme to a smaller or greater extend. One aspect that is not dealt with, however, is how the outside world cope with unreasonable people and vice versa. I am in the middle of setting up something completely new in Spain, and it is incredible how many barriers you hit. Now I really understand how Virgin Airlines, Uber and AirBnB and others have had it and still have. I do not know what is more difficult - fighting the internal forces in big organisations or fighting the external forces when you are on your own.