The workplace of the future: holacracy

Julian Birkinshaw
Business management and operation
Save to my profile

One of the hottest ideas in management today is holacracy. Invented by software executive Brian Robertson and made famous by online retailer Zappos, holacracy is that rarest of things – a genuinely new approach to organising.

Most entrepreneurs don’t give much thought to how they structure their companies: they just adopt whatever models they have seen before. But Brian Robertson didn’t take the easy option – he saw the flaws in the existing hierarchical management model and he sought a better way. In 2001 he built a software company, Ternary Software, with the express purpose of finding a better way to run a company. This better way, now called holacracy, has been adopted in varying degrees by some five hundred companies around the world.

Holacracy is still work in process. There are plenty of sceptics, people who say the new model is too complex, or will only work in small companies. But regardless of where the holacracy movement ends up, Brian Robertson gains kudos for putting his ideas into practice, for pushing the boundaries and for showing what is possible.

Julian Birkinshaw: Tell us how holacracy is different from traditional ways of organising?

Holacracy removes power from a management hierarchy and distributes it across clear roles. The work can then be executed autonomously, without micromanagement.

Brian Robertson: Essentially, holacracy is a new way of running an organisation that removes power from a management hierarchy and distributes it across clear roles. The work can then be executed autonomously, without micromanagement. 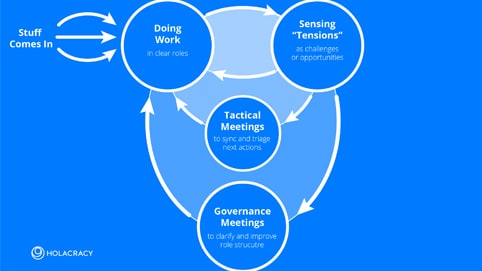 The traditional management hierarchy, given the needs of the world today, is simply becoming obsolete. We need processes that are more adaptable, more agile, that have the capacity to scale.

I wouldn’t describe holacracy as a “flat” way of organising – it just has a different way of doing the functions that we look to management to do. So instead of having a boss that tells others what to do, it is a way of breaking down boundaries, and clarifying who has responsibility for doing what. With holacracy, decision making is incredibly fast because the vast majority of decisions are made autocratically by one person, who knows the boundaries of their authority. The difference is (compared to hierarchy) we don’t roll those people up into a boss who can countermand their decisions. It’s more like a society where everybody has their property, their life, they lead it. And so do their neighbours and we all know the boundaries.

With holacracy, decision making is incredibly fast because the vast majority of decisions are made autocratically by one person, who knows the boundaries of their authority.

Julian Birkinshaw: That makes good sense, but occasionally we still have to make collective decisions which cut across some of those boundaries that we’ve created. Do you find that in practice those types of decisions can also be made very quickly?

Brian Robertson: From our experience, when those things come up with holacracy, they are resolved more quickly than what you get in a management hierarchy. Often with a management hierarchy, where theoretically you have clarity, in practice you get people cc’ing everyone else, and calling big meetings to try and find consensus and buy in, because no one wants to step on anyone else’s toes. Holacracy doesn’t prescribe one answer: it gives you a ‘meta’ process to ask the question; how those specific cross-cutting decisions get made?

Julian Birkinshaw: So this meta-process involves some meetings where you clarify accountability and responsibilities, at which point, hopefully, everyone knows what the new situation is and then things move on. Is that the idea?

Julian Birkinshaw: Now, some of the most difficult types of decisions that you have to make, I imagine, are decisions on hiring and firing, or big strategic changes in direction. Traditionally, we often allow some big boss to weigh in and decide. How do you handle those more contentious things?

Brian Robertson: So, the interesting thing about holacracy, it doesn’t prescribe how you should make specific decisions like that. Rather it says, well, let’s look at how you're making them now, does anyone have any tension here? For example, is the firing process somehow getting in the way of the organisation in any way whatsoever? The goal of holacracy is to take the tension and say – how should we change that process so that there is a better result? It is not prescribing how to do it: it’s giving you the tool to evolve the process.

Julian Birkinshaw: Very interesting. So you could actually, at least in theory, see the emergence of a traditional hierarchy as one of the outcomes from the set of rules that you've created. Is that right?

Brian Robertson: Yes, I would say a typical management hierarchy is a subset of the possibilities that holacracy enables. But one thing is still different with holacracy: there is a constitutional power structure at play that you cannot override. People will always have the ability to go to a governance meeting in holacracy and change the way things work, you can't override that.

Julian Birkinshaw: And talk to me about targets and key performance indicators, do these still work in a holacracy setting?

Brian Robertson: Many companies using holacracy will have lots of metrics for transparency and visibility. But the difference is that in traditional management hierarchies, targets are used as a means of getting alignment and control, whereas in holacracy, people push away from that and look at metrics more as just data points. You can reflect on them, but frankly whether somebody hits the target or misses the target itself is a terrible way to judge performance. In my experience, companies using holacracy find targets to be an antiquated means of trying to achieve performance and control. Eventually many companies will just drop that whole approach and just find something much more dynamic.

Julian Birkinshaw: Roughly how many companies in the world now are formally adopting the methods that you put together here?

Brian Robertson: It’s been hard to keep count, but there are in the order of several hundred, so 300-500, somewhere in that ballpark.

Julian Birkinshaw: Let’s talk about scaling up. Most of the companies using holacracy are presumably small to mid-size companies. What are the biggest companies? Zappos is the one everybody talks about, but presumably there are others as well?

Brian Robertson: Yes, Zappos is the largest that’s gone end to end, I think there are somewhere between 1500 and 2000 employees now. There are larger companies that have adopted it in one department. For example, one I can talk about is the state of Washington, which was doing a pilot on one team and is now ramping that up to a pilot across somewhere in the couple of hundred people. And we have seen uptake across the world – lots of small companies in Europe, such as in the Netherlands, France and the UK.

Julian Birkinshaw: So as this movement spreads, tell us what success looks like?

Brian Robertson: I think there is still some learning to be done here. The challenge is, holacracy is such an underlying core platform that anything you measure could be related not to holacracy itself, but to external factors. But one useful set of measures we have seen are, how much time required in meetings or discussion to get a clear agreement on action? In some pilots, the answer was something like a 90% reduction in time. Another, which was even more interesting, was what we call governance changes: How long does it take to change someone’s responsabilities or authority, or a core policy?

Julian Birkinshaw: And what about the implications of Holacracy on individuals.

Brian Robertson: This is another example of what we would metaphorically term an application that needs to ride on top of the holacracy operating system. If you don’t have a management hierarchy to climb up, you're probably going to need some other way which is actually a lot more organic and leads more pathways than just a linear climb up the management ladder. For people who are coming from a management hierarchy and moving into this system there is a lot of unlearning and re-learning to do. In a management hierarchy, it’s very easy to defer your authority to someone else, whereas holacracy requires you to own your tensions and solve them yourself.

Julian Birkinshaw: One final question and it’s a bit mischievous. If I look at the big management trends over the last 30 years, re-engineering or total quality management for example, what happens is that the idea takes off, it becomes quite successful, but then it becomes ‘corrupted’ as people use the rhetoric, the label, but they don’t invest in making it work properly. And the net result of course is that the whole movement ends up becoming a little bit tainted.

So perhaps I’m jumping ahead of myself here, but to the extent that holacracy does really take off, is there a risk that we get companies talking about the language of this without actually doing a job properly? Have you seen any evidence of that?

Brian Robertson: Oh, yes, I think that’s definitely a risk, very much so. But I do think holacracy has certain features that can help. One is that a lot of those other change approaches are built on top of the basic power structure and they add something to it, whereas holacracy is a replacement for the management hierarchy, it really is changing the core power structures. The other thing is that holacracy is a written down constitutional power structure. It’s interpretable by a court of law. In my company we’ve integrated it into our legal bylaws. We legally, literally have no CEO or anything like that. We have a totally different power structure. So because it’s written down like a constitution, it is more obvious and visible. Hopefully that will help holacracy to endure.