With declining mail volumes and the digital revolution, can post offices be saved from oblivion? Liam Church, CEO of Escher, thinks so.

With declining mail volumes and the digital revolution, can post offices be saved from oblivion? Liam Church, CEO of Escher, thinks so. 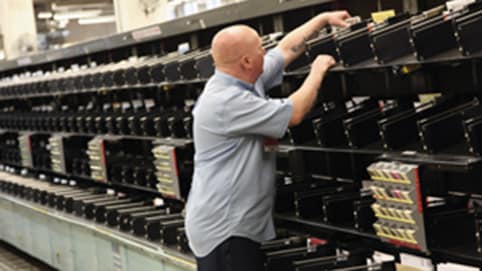 The Post Office has a central role in Irish history. During the Easter Rising of 1916 the rebels were based at the General Post Office in the centre of Dublin. Nearly a century on, in an undistinguished Dublin office block, Liam Church is eulogising about the potential to re-invent the world’s post offices as champions of another revolution: the digital one.

Church, the President and CEO of Escher, is evangelical. He needs to be. His message is hardly an easy sell. After all, post offices worldwide have appeared set on a process of slow and steady decline for a number of years. Liam Church shrugs. He has heard this many times before. The world’s post offices are something he knows a lot about. Escher, founded in 1989 in Boston, sells its technology to post offices worldwide. It now has around 80 employees with offices in Boston, Dublin, London, Singapore and Centurion, South Africa.

Escher sells a suite of technology that effectively underpins all of the work of a typical post office counter — everything from stamps to banking and beyond. It now handles transactions at about 170,000 locations.

This means that its technology has to be robust enough to handle 60 million transactions and ten million XML documents per day. “Over the last 20 years we’ve grown to be a really big supplier in this area, with 31 customers. Our next-nearest competitor has two,” says Church. It is a tidy niche. The technology, which originated at MIT, is built around high-performance message-based middle-ware. At the unsexy end of the High Street it is unsexy technology — scalable, robust and able to work across a variety of network environments. “It’s very flexible because it has to be. Countries will have types of communications in the far reaches of the country which are quite different to what they might have in their cities.

They need one software infrastructure to fit across all of those. To this can be added the fact that post offices are different in different jurisdictions. We have six African customers and you need to be close to them to help them and also to learn about their businesses.”

To Liam Church the Post Office is not a dying institution but one of the cornerstones of civilisation. Post offices, he argues, are handy barometers of where a nation is economically and otherwise. Civilisations may build prisons fairly quickly, but they also start selling stamps. One of the fundamental pieces of infrastructure being reintroduced into Iraq is a postal system.

Of course, over recent years the scope of post offices has expanded as they have sought to remain competitive in the face of rising competition and shrinking governmental support. “Some would say, you never just went in to simply buy a stamp from a post office,” says Church. “Posts have diversified over the last 15 to 20 years and are now involved in financial services, provide a link between the community and government and big utilities, and so on. They have started to make more use of their branch networks. Think about it. Usually they’re the biggest retail network in a given country. The postal service is part of the community but people are still not quite clear as to why it is or why it should be. Everyone knows the postal service and the whole concept of universal service are important but they don’t always know why they are important.”

And yet, there is no escaping the fact that post offices are looking down the barrel of a commercial gun. Forecasts differ, but they tend to suggest that over the next five to seven years mail volumes will drop by anything from 50 to 80 per cent. To this can be added another damning statistic: the cost base on the mail side of the business tends to be somewhere between 98 and 103 per cent. This means post offices are either making a tiny profit or are subsidising the mail side of their business.

Escher cannot afford to face such grim statistics with equanimity. Post offices are its market. In search of a way forward, Liam Church got back to basics. The reality is that the vast majority of letters originate with a digital source. They are then transferred from digital to a paper medium so they can be transported. And, then, they are often taken from paper and reconverted to digital form.

As Church teased out the issues and what was happening in the world with the likes of Google and Facebook, he concluded that, at some stage, a national digital alternative was going to be required. This, he reasoned, could be built on the postal model.

“Nobody is saying that there should be a national alternative for what is happening in the digital space, but I feel that countries will want to have some control over how communications are handled within their borders,” says Church. “As we go more into a digital life, there will be a need for society to take control of its digital assets, for governments to be able to implement policy that society has asked it to do, and regulators to regulate how we as a society interact in this digital space, just as they have done in the physical space.”

Church argues that post offices could act as central repositories of data and as a means of offering some governmental and regulatory control over the relentless flow of information. There is no escaping the fact that post offices are looking down the barrel of a commercial gun. “Within the model of a national post office there are certain values that are inherent. The first one is collection and delivery. If a system is not based on collection and delivery then the onus is on one party to do something.

The second fundamental of a postal network and a postal system is privacy. This is a growing issue. If it’s an email then you know it could really have come from anywhere and anyone can see it. If it’s a website, we know that when we’re going to shop somewhere or surf the internet, everyone’s looking at us — or at least those in the know — and looking to see what we’re doing.

“The third item of postal model is inherent data protection — I own my data and when I want to transfer it to somebody else, I select what data I want to deal with, I put it in some device and I send it to exactly the person or people I want it to go to. But within that system, it means that I’m the one who has it, I own it, it’s mine and I choose who I’m going to give it to. “The last cornerstone of a postal model is equal access. Equal access is very complex and goes much further than simply one delivery a day or two deliveries a day. It’s a system where all elements of the community or society have an equal right to access a service. To be totally equal, all of the components of the communication system have to be above-board, universally accessible, known and published. So within a postal system, we have access to a directory of all addresses. We can find them on streets, we can look and say that there are ten businesses along that set of streets. And that directory information isn’t proprietary to any one organisation in the physical world — unlike in the digital space.”

Church’s point is that a postal system is inclusive. In contrast, digital networks are, as they currently operate, exclusive. For example, Myspace and Facebook are incompatible. As commercial organisations, the digital players have no real interest in inclusivity. And that is where the post offices come in. They offer the potential to create national digital systems. Church envisages a future in which individuals have their own systems which file away all their bills, bank account details, personal communications, and so on.

“What the citizen needs is a digital place, a filing mechanism, he needs to authenticate, he needs to remain private, he needs to know who he’s dealing with. Think about it. If I want to find a solicitor, I go to the internet. But not all solicitors are represented equally on Google or any of the other mechanisms we now use,” he says. “We are still at the early stages and suppliers are fighting for position. Standards are still being defined. But, the key in this market is making connections between people, locations, physical and digital, enabling communication and acting as a middle man. This is the traditional role of the post. The post has always been the middle man.”

The development of e-government would appear to go some way to answering some of Church’s concerns. This is all well and good, he contends, but it overlooks the importance of business and personal communication — things which people, understandably, would rather their governments weren’t involved in. Instead, he imagines the Post Office as a managed communications infrastructure, a digital hub.

“Society has the three elements: government, business and consumers. Each of them has different needs. The needs of business have been the highest level so far. At the moment, there’s nobody to stand up for the last players, the individuals. That, to me, is one of the reasons why the Post Office is so important. The Post Office is the nearest thing within the community to these individuals. “With the Post Office re-invented, the government gets a system where there’s equal access so that the smallest company is equal to the largest company and has equal access to all elements of this infrastructure. That encourages competition. What government gets is separation of individuals from businesses. Businesses can tend to be very predatory when left to their own devices.”

As yet, there are few signs of governments grasping the digital nettle and proclaiming revolution from their post offices. But, as privacy and conflicting commercial and personal agendas become ever more prominent, the issues raised by Liam Church will rise up governmental agendas. Revolution or not, the humble post office will never be the same again.