Tim Gocher and Tim Gocher
Finance Economics
Save to my profile

Global corporates and investors are entering frontier markets for high growth, less competition and lower production costs. It’s easy to see why when looking at the World Economic Forum’s projections for GDP growth in 2017: the top three countries – Ethiopia (8.6%), Uzbekistan (7.6%) and Nepal (7.5%) – are all frontier markets.

In Nepal, a country of around 30 million people, Carlsberg, Coca-Cola, Standard Chartered and other companies are thriving. This trend is borne out by Unilever Nepal’s 54%–94% return on equity in each of the last three years.

Frontier markets often suffer high poverty and pollution. As a result, investment in frontier markets can quantitatively demonstrate organisations’ contribution to sustainable economic, social and environmental improvements. This is significant, given that environmental and social governance (ESG), impact and sustainability strategies are becoming the norm for corporates and fund managers.

But companies entering frontier markets face high reputational and regulatory risks from corruption. Top down, legislative efforts such as anti-corruption commissions are struggling despite large amounts of targeted international aid. Corruption in LDCs remains chronic as Transparency International’s Corruption Perceptions Index shows. The average LDC rating in 2016 was 28.8 (out of 100), compared with an OECD average of 68.7 – both almost unchanged since 2011.


The competitive dynamics of corruption


Investment that enforces strict anti-corruption, corporate and ESG codes helps build new industry champions in frontier markets. Once a well-funded innovator takes the lead, industry competitors are compelled to emulate these better practices to survive. This is due to simple asymmetry. There’s a limit to cost saving through corruption. You can’t pay less than zero through tax evasion. And to develop larger projects or expand internationally, firms must reject corrupt practices to access compliant FDI and international capital markets, which can fuel unlimited growth and lucrative exits. 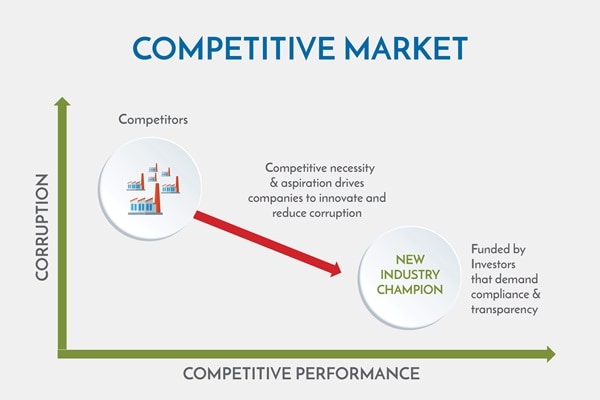 How does investment change the dynamics of corruption? To answer this we first need to understand how systemic corruption affects competitive markets. Imagine a hypothetical coffee bean market in Sudan, close to the Ethiopian border. The sellers have no savings and there are no external capital providers. Corruption is everywhere. Each seller, despite making a profit, has fiddled their tax returns to avoid making contributions. The coffee is imported from Ethiopia, with all sellers bribing customs officials to eliminate tariffs. The sellers also bribe local officials to avoid paying for a licence to operate. They are competing to reduce costs through corrupt practices.

If one seller then voluntarily decides to pay all taxes, tariffs and fees, they need to increase their coffee price to cover basic living costs. This moral operator would sell no coffee and go bust, potentially leaving their family destitute. This is the vicious cycle of corruption. 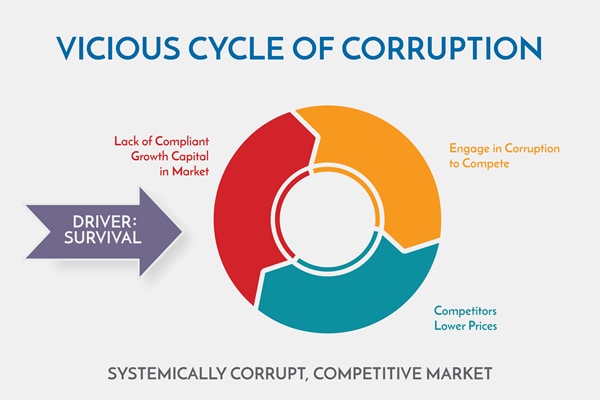 It’s a systemic issue where market participants in poor countries choose between destitution and corruption. Many of them would take other approaches if they could.

This is where growth capital that adheres to good governance practices applies. While some domestic capital may uphold these standards, it often comes from abroad where investors are subject to criminal corruption law such as the OECD Anti-Bribery Convention now ratified by 43 countries. Imagine an investor offers our moral pioneer $500 in return for legal compliance and transparency. The seller invests this in a coffee roaster and grinder, adding value and increasing margins sufficiently to pay tax and fees, and provide investor returns while still improving their take-home profit. Their stall is swarmed with buyers, forcing competitors to take note. A second seller takes a $1,000 investment to buy the same equipment and a coffee machine. A third takes more capital to invest in tables and chairs, and so on. The virtuous cycle of compliant capital is born. 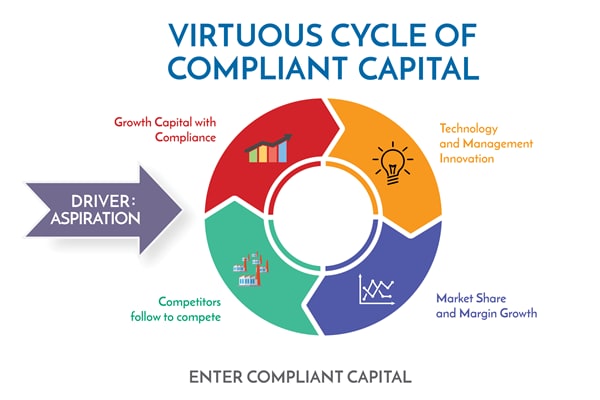 At a company level in such markets, the logic behind the decision to accept or reject capital, and the accompanying compliance costs, is captured by this simple equation:

If P > (B + C), then company will accept investment and reduce corruption
Where:
P = Perceived profit generated as a result of growth capital
B = Economic benefits from corruption
C = Cost of compliance

At a market level, marginal profit and corruption will reduce as each independent actor makes the above decision until an efficient frontier is reached (marginal revenue = marginal cost) or the equation above no longer holds. In the real world, foreign businesses and fund managers observe these effects across frontier markets, and at larger scales.


Standard Chartered has brought FDI and good governance into many frontier markets. The bank has witnessed a similar effect on corruption in markets such as Sierra Leone, Uganda, Zambia, Cambodia, Bangladesh and Nepal. However, its frontier market investments weren’t always a success.

In Afghanistan, where Joseph Silvanus was Standard Chartered CEO from 2004–2007, the bank had a transformational effect on the market, standards and corruption. “However,” Silvanus says, “we withdrew not for commercial, but for security reasons when we could no longer guarantee the safety of our staff and assets.” This suggests that certain basic conditions are required, notably peace and security, for compliant investment to have a positive, long-term effect on corruption.

Elsewhere, Emerging Markets Investments, a private equity fund manager covering Cambodia, Laos, and Myanmar, invested in a low income school network. The firm’s CEO Joshua Morris says: “At the time of the investment, the vast majority of private Cambodian schools were poorly managed, did not pay taxes and had sub-par health and safety programmes, if any.

“When we invested, we formalised the school network with the Ministry of Commerce in Cambodia, registered for tax, and delivered an international health and safety policy. We then used this to our advantage as a core marketing message. We found that health and safety was, not surprisingly, one of the key drivers of parental decision-making and we won market share. To compete, schools in the market are now having to formalise and become part of the tax regime. Strengthening health and safety standards has become a competitive necessity.”

In rural India, says Vineet Rai, Founder of Aavishkaar Intellecap Group, the increase in well-governed capital for small to medium-sized enterprises has dramatically impacted aspiring growth companies. Aavishkaar is a pioneering investor in rural India, Indonesia, Sri Lanka and Bangladesh, and is raising an Africa fund to bring their total assets under management to US$800 million (£611million).

“As an entrepreneur in India there is big downside if you don’t pay your full taxes. Venture capital, private equity or even bank funding requires you to be transparent in accounting, disclosing your bottom line to raise money for growth,” Rai says.

“The dynamics of corruption change with rising human aspirations. Capital and technology allow firms to scale. The distribution of equity options combined with successful IPOs has made the upside more tangible than short-term fiddles. If you’re clean, clear and honest, you can do an IPO, a strategic sale or raise capital from a qualified IPO for further growth. If you’re not clean, you can’t.”


How to tackle corruption


The policy implications of this approach to tackling corruption are far-reaching. Corruption causes fiscal deficits in frontier markets, which are often plugged by international aid. The need for financial aid may reduce if donor countries can help increase private sector investment. This can be achieved by allocating more to de-risking tools such as guarantees and concessional capital, and increasing the investment capacity of national development finance institutions. Donor support for improving private sector regulations in frontier markets can also increase investment.

As US Supreme Court Justice Oliver Wendell Holmes said: “Ultimately tax is the most sustainable source of finance for development and the long-term goal of poor countries must be to replace foreign aid dependency with tax self-sufficiency.” Together, such policies could stimulate a systematic reduction in corruption and a sustainable rise in prosperity in the world’s poorest countries.


Tim Gocher is Hon. Professor of Sustainable Business at the University of Nottingham (Malaysia), a member of the International Centre for Corporate Social Responsibility, and a Guest Lecturer at London Business School. He is CEO and founder of Dolma Impact Fund – the first international private equity fund for Nepal. He chairs the non-profit Dolma Foundation investing in education and sustainable development solutions for the poorest communities in Nepal.

Before 1984 there were only three government-owned banks in Nepal. Transactions were an opportunity for employees to extract money from customers. In extreme cases, customers even paid a fee for withdrawals from their accounts. Loans and new accounts were often facilitated through personal connections, and introductions to bankers, who expected favours or percentage cuts.

“These new banks with foreign investors practised a higher standard of governance and loan provisioning compared with incumbent banks,” says economist Dr Yuba Raj Khatiwada, who joined Nepal’s central bank (Nepal Rastra Bank) in the early 1980s and was Governor from 2010–2015. “Soon, the incumbents were forced to compete, improving customer service and governance, while the central bank enforced better governance, improving practices across all banks. This was inspired by the practices imported from foreign investment.”

Changes at Standard Chartered had a big impact. Joseph Silvanus, CEO of Standard Chartered Nepal, says: “We introduced Know Your Customer (KYC), IFRS accounting and the Basel II regulatory framework before our competitors. We worked closely with the central bank to implement such compliance standards, and continue to do so today.”

“We have seen the growth of modern-day banking in Nepal bring transparency into the financial industry, thereby driving down corruption across the sector. One important factor in this is knowledge transfer. Today seven, serving CEOs of commercial banks and many of their senior level managers previously worked at Standard Chartered Nepal.”

Today, there are 28 commercial banks and 67 development banks (Class B) in Nepal, along with 42 smaller finance companies. “Borrowers’ choice has widened significantly, which in itself has reduced the need for corrupt practices to obtain banking services,” explains Dr Khatiwada.

“Increased competition has led to more investment in IT and new products in retail banking, credit cards, debit cards, online banking, branchless banking and innovations in project financing, many of which reduce transaction touch points and therefore the opportunity for corruption. This isn’t to say that FDI automatically reduces corruption and improves innovation; that depends on the quality of standards brought by the foreign investors involved.”

While not perfect, banking is now considered one of Nepal’s most professionally governed sectors. All financial institutions have to list on the Nepal Stock Exchange, increasing transparency and management incentives. The sector has seen 18% CAGR in five years.

Exploiting Disruption in a Digital World

Seize the opportunities brought by the digital revolution and turn challenges into possibilities. With this short course, you’ll learn to exploit radical new technologies, while also developing strategies for long-term success.

Hon. Professor of Sustainable Business at the University of Nottingham (Malaysia)

Hon. Professor of Sustainable Business at the University of Nottingham (Malaysia)