Non-traditional work arrangements, such as telecommuting, have effects that are often not recognised.

Kimberly D. Elsbach and Dan Cable
Organisational behaviour
Save to my profile

Non-traditional work arrangements, such as telecommuting, have effects that are often not recognised, according to Daniel Cable and Kimberly Elsbach. Their research over the last decade shows that merely showing up at the office affects your standing at work. Daniel Cable teaches on our Essentials of Leadership programme. 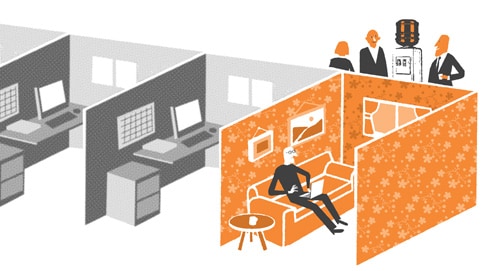 According to the US Bureau of Labour Statistics, on a typical workday in 2010 about 24 per cent of employed people did some or all of their work from home. A UK Labour Force Survey showed that, at the end of 2009, one in eight working people worked mostly at or from home. Another 20 per cent did so for fewer than three days per week. A poll, reported in Telecommuter News in June, claimed that one in five workers worldwide telecommute.

After decades of debate about changing work practices, the impact of technology, flexible working, hot desking and so on, telecommuting is undoubtedly here to stay.

Since telecommuting is now a common workplace occurrence, it’s important to note that there are advantages for both employers and employees from such arrangements. However, employees working away from the office also need to know about the potential disadvantages. We have found that remote workers are often evaluated differently from their in-office colleagues, all because they are not physically seen in the workplace.

Over a decade of research with hundreds of corporate employees, both in management and other company ranks, we have come to realise the importance of what we call passive face time — which we define, simply, as being observed in the office. Unconscious judgements are being made about employees based on this observation, judgements that do not have to do with their level of success or productivity. We have found that supervisors may unconsciously assess remote and in-office employees differently based on this principle of passive face time.

For our studies, we used techniques incorporating casual interviews, observation and controlled experiments in order to gather data about how passive face time affects employee ratings.

What does this mean for people working from home? A few suggestions emerged from our in-person interviews:

Be immediately available. Respond immediately to emails, so that no one can say they always have to wait for a response from you. If you are on the phone, check messages regularly and respond as soon as possible.

What does the new popularity of telecommuting mean for managers? We believe that managers should take the following steps so that all employees are fairly evaluated.

Don’t use trait-based evaluations. Resist the temptation to evaluate employees based on their ‘leadership skills’ or ‘ability to work in a team’. Current research on performance appraisal suggests there are numerous flaws with these assessments — there may be no association with a company’s corporate outlook or culture, and they do not help people truly understand what to change about their work habits. Further, our findings emphasise the hidden effect that the mere physical presence of someone in an office can have. Just because someone is not in the office on a daily basis does not mean that they lack leadership or the ability to work well in a team.

As much as possible, use objective output measures. Critics of working away from the office believe that remote workers lose the benefits of interaction with their colleagues, such as impromptu help or hallway conversations. Our findings highlight the additional danger that employees’ workplace stability and success can also be perceived negatively. To avoid these unconscious pitfalls, managers should revise their employee performance evaluations to measure objective outputs, such as the meeting of numeric goals or defined tasks completed.

Consider work arrangements when using peer feedback. Many companies incorporate ‘360-degree’ appraisals. Such evaluation techniques judge individuals based on feedback not only from their bosses and peers but also from employees they supervise. We found that employees can just as easily incorporate unconscious trait judgements. Managers, thus, must filter out any 360-degree feedback that is biased simply because the person being evaluated principally works outside the office.

Does it work for you?

Earlier this year, a British telecommunications company, O2, permitted 3,000 employees from the head office in Slough to telecommute. This was a planned experiment that required technology upgrades and special employee guidance.

News reports on the event were all-around favourable. According to ABC News: “Eighty-eight per cent of the home-based workers said they were as productive as they normally were in the office, while 36 per cent said they were even more so. There were other reported perks: 15 per cent caught up on sleep and 14 per cent bonded with their families. They saved 2,000 hours of travelling time, which translates into $14,000 in commuting costs.”

Yet, the decision on whether to become a telecommuter is more normally left to the employee. Our final suggestion is that, if you are offered an opportunity to work away from the office, be aware that this will affect your face time with your work associates and may affect your subsequent evaluations by your supervisors. Be sure that the advantages of working from home are greater than the possible ramifications of absence from the office. Decide if you can afford to miss the conversations on Monday morning around the water cooler.