Business in Africa is often characterised as being hamstrung by political instability, corruption, poverty and poor infrastructure.


But a survey of more than 350 business leaders across five African economies that don’t tend to get much air time in the international press paints a very different – and encouraging – picture.


Buoyant business confidence, improvements to digital and physical infrastructure and booming consumer demand are driving economic growth and positive sentiment in the Democratic Republic of Congo (DRC), Ethiopia, Tanzania, Uganda and Zambia. While entrepreneurs in these countries still face problems with regulation and shifting political landscapes, many express strong optimism for the future.


These are the key insights from a report compiled by the Wheeler Institute for Business and Development at London Business School, together with The Africa List, a membership organisation of private sector leaders across Sub-Saharan Africa.


The Wheeler Institute aims to apply business insight and expertise to the world’s biggest challenges that impede social progress and economic development.


The Africa List was established in 2014 by CDC Group, the UK’s development finance institution, set up by the UK Government to invest and support business growth in the world’s poorest regions in Africa and South Asia.


“An extensive membership base across sub-Saharan Africa puts The Africa List in a privileged position: we gain access to unique economic and business insights from these high-potential markets through the membership and through the course of our work, every day. We created The Africa List Business Barometer to share these insights with the world,” says Nieros Oyegun, Head of Network, The Africa List, who holds a Masters in Finance from London Business School.

“The views of the business leaders recorded by The Africa List Business Barometer are optimistic, even when operating in challenging environments”

Amelia Whitelaw, Executive Director at the Wheeler Institute for Business and Development, adds: “So much of what is reported on the fast-growing economies and businesses of Sub-Saharan Africa is presented either as sub-text in sweeping global studies or hard-boiled indigestible economic data.


“This report focuses deliberately on these often under-reported markets, providing insights to those less familiar. We have achieved this through a confidential survey process enriched with personal profiles and reflections.


“Beyond informing debate, our hope is that insights from this survey and future iterations will stimulate specific projects in these countries, together with further collaborative research.”

Bullish about the future


The study canvassed the opinions of corporate leaders in five countries often overlooked in studies of African business. As the continent’s biggest economies, Nigeria, Kenya and South Africa have most typically attracted attention – and investment.


But in Sub-Saharan Africa, DRC, Ethiopia, Tanzania, Uganda and Zambia are showing increasing business activity, interest and confidence. These are rapidly-growing economies with young, energetic populations with the potential to drive the African continent’s future growth.


The majority of business leaders surveyed – 81% – believe the business situation in their country to be good or satisfactory. Almost nine out of ten (87%) expect the business environment to remain stable or improve in the year ahead. Meanwhile, 85% plan to maintain investment at the same level or increase it over the next 12 months. 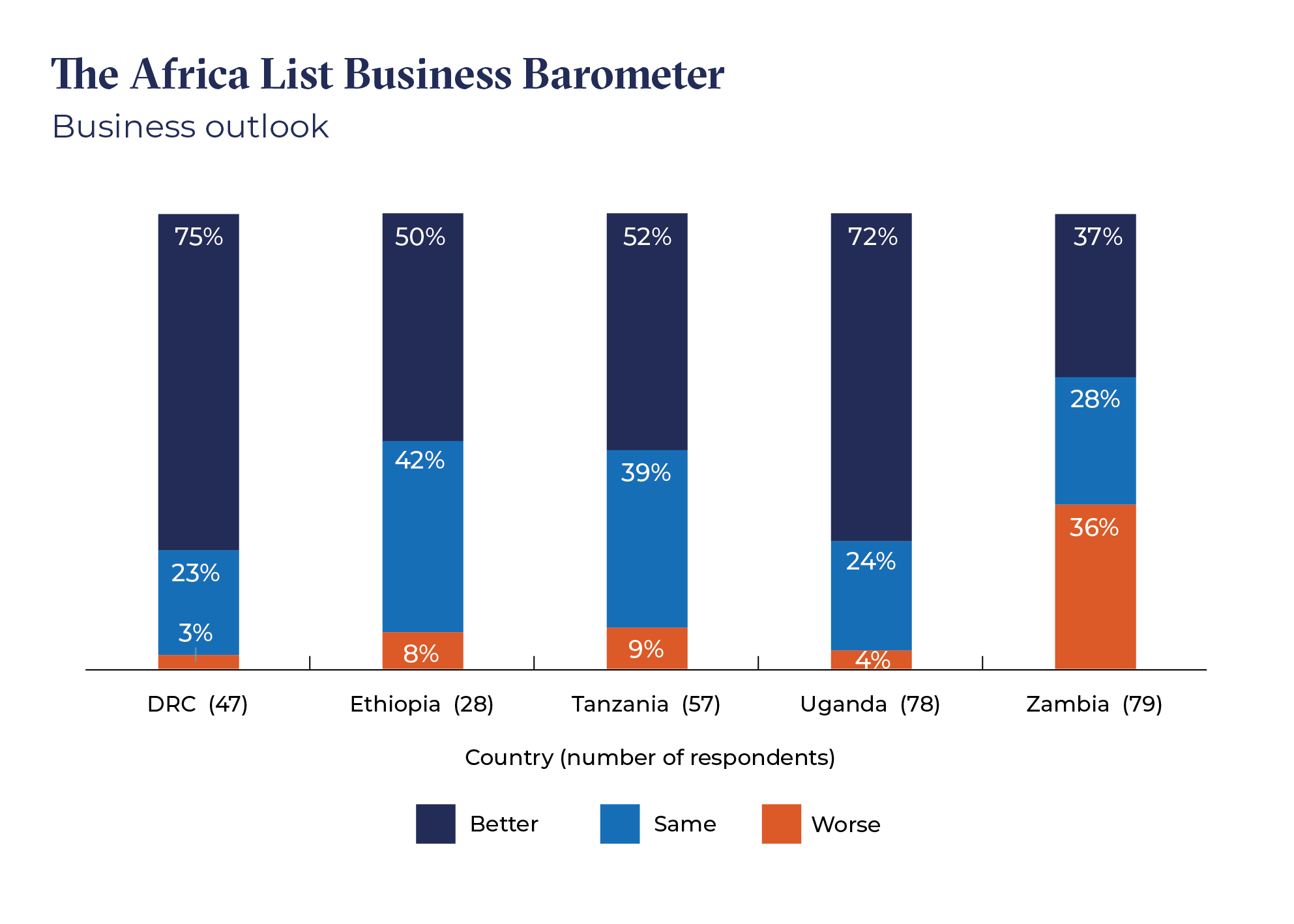 On plans for investment:

Elias Papaioannou, Co-Academic Director of the Wheeler Institute, comments: “For Africa to enter a sustainable development path, its businesses need to flourish. While governments, local and foreign, and international institutions have a crucial role, African entrepreneurs, business leaders, and innovators will spur employment, investment and opportunity.


“It is encouraging that the views of the business leaders recorded by The Africa List Business Barometer are optimistic, even when operating in challenging environments.”


Business leaders in Ethiopia are particularly robust in their predictions for growth in gross domestic product (GDP) in the year ahead, predicting an average increase of 7.1%. David Solomon of Friendship Business Group in Ethiopia says of his country: “Economically, there’s opportunity in almost every sector. Some of the highest GDP growth over many years is here. On the ground, when you come to Addis Ababa, the growth is tangible.”


Respondents in all countries surveyed suggest that growth rates will be somewhat lower than those predicted by external forecasters. Nevertheless, the Business Barometer results point to healthy rates of economic expansion. Business leaders in Tanzania predict GDP growth of 5.3%; in Uganda, the figure is 4.4%; and in DRC it is 3.9%. Of the countries in the Africa List sample, companies in Zambia are the least optimistic: they suggest that GDP will grow by 2% over the coming 12 months.


As for inflation, estimates varied considerably between countries. In Tanzania, respondents predicted a 0.9% rise, while those in Ethiopia, Uganda and Zambia put the range between 1.9% and 2%. After a year of runaway inflation, DRC business leaders expected a significant drop to the country’s inflation rate.


Overall, hopes for revenue growth are strong – 87% of business leaders across the five countries anticipate revenue will rise over the next 12 months. Growth rates ranged from 11% in Tanzania to 17%, 22% and 23% in Zambia, Uganda and DRC respectively. Ethiopia again proved most optimistic, with predictions of revenue growth of 33% for the year ahead. 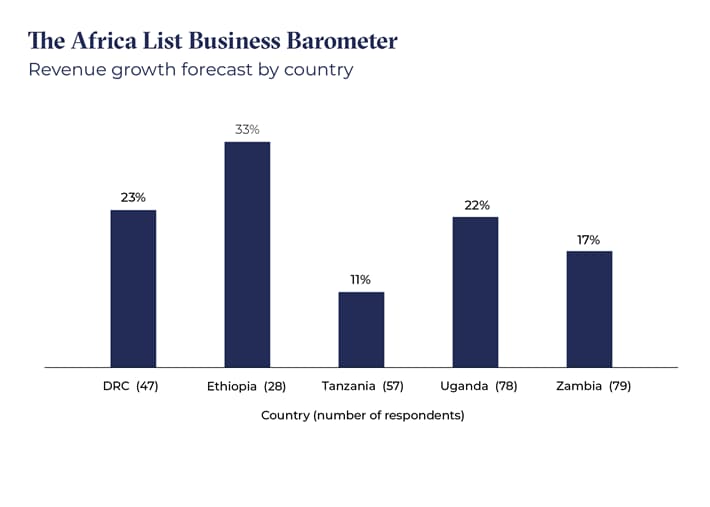 But expected revenue growth varies markedly between sectors. Those operating in healthcare, for example, predict three times the amount of growth as leaders in telecommunications.


Professor Chandy notes that the Business Barometer respondents were more upbeat about business conditions than might have been expected. “It’s a much more optimistic story than we’re used to hearing,” he says.


“The Business Barometer respondents represent a unique group, since they tend to be in medium-to-large companies, whereas most businesses in their respective countries are micro and small businesses. The question – and the policy challenge – is how can this sense of optimism pervade the rest of each country?”


The opportunities – and the risks


Burgeoning customer demand is singled out as the biggest opportunity for growth by business leaders. This is especially the case in Ethiopia, where 65% of respondents see it as the potential key to future success. 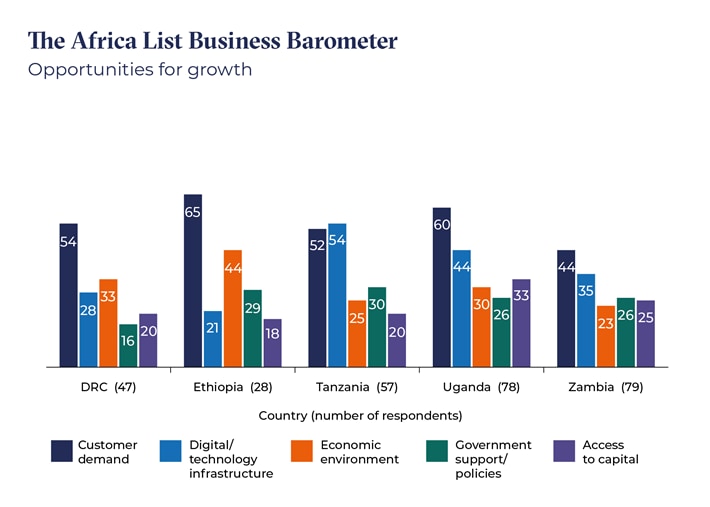 Many leaders also have their eye on developments in digital and technology infrastructure: these are recognised as having the potential to drive business growth, but more than one in four leaders in the banking sector saw these areas also carrying risk.

While the economic environment is identified as an opportunity in all countries, 57% also perceive it as a risk.


Those surveyed were frank about obstacles to growth. Specifically, regulation, government policies and the political environment were all acknowledged as potential threats to future success.Those working in the consumer services, diversified financials, healthcare, food, beverage and tobacco industries believed access to capital was the greatest threat to their business.


When asked about hiring intentions for the year ahead, optimism among business leaders was once again evident, with 84% expecting to increase or at least maintain their staff numbers. Ethiopian bosses are the most confident about growing their headcount – three out of four leaders anticipate hiring more staff over the coming year.


Skills shortages are a common concern. Almost a third of those surveyed said a lack of skilled workers was a barrier to growth. A repeated gripe was lack of skills at middle management level – more than six out of ten leaders complained of this, while 56% said finding skilled workers in general was a challenge. Smaller businesses of all sizes and across all sectors lament middle managers’ poor skills. 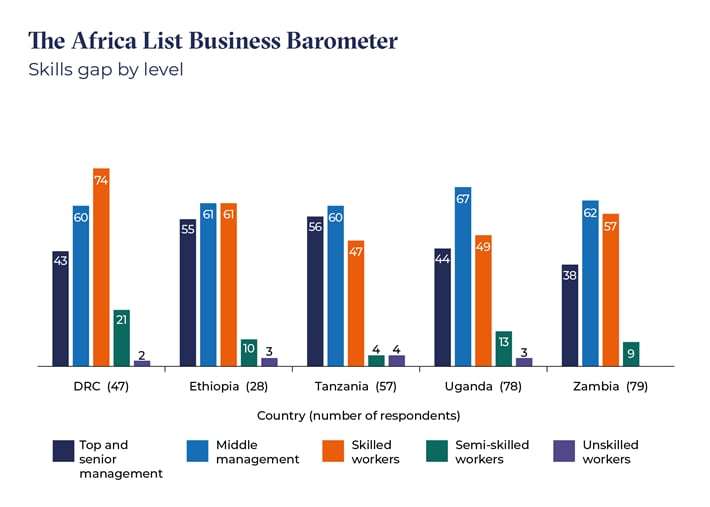 A paucity of adequately skilled candidates for top, senior management positions was also an issue for 46% of respondents overall, with those operating in the banking, diversified financials and telecoms sectors most likely to regard this as a barrier.


Notably, those running large organisations with more than USD $100 million (£76.8 million) of in-country revenue were more likely to complain of a lack of skilled workers than those leading smaller enterprises. The blame for this is largely directed at in-country education systems.


Djo Moupondo, Chairman of La Clique Music Group in DRC, says: “A lot of countries in Africa have the same problem. In DRC, the curriculum is over 60 years old and was implemented by the Belgians with only small changes since. The gap between education and real life has become huge and is growing.”


When asked which areas of expertise proved lacking, certain skills gaps were evident across all countries:

Finding unskilled labour does not appear to be a problem. Just 2% of respondents identified shortages at this level.


The idea of business being a potential force for good has gained momentum in recent years. However, rather than focusing on good citizenship, paying taxes or engaging in corporate social responsibility, business leaders across all five African countries said creating jobs was the most significant way in which they improved society.


The provision of products and services that are in demand was also a commonly reported way of doing good, specifically among energy and healthcare leaders.


Creating wealth for shareholders barely registered – just one in 10 leaders thought this a way for businesses to make their country a better place. In contrast to the poor perceptions of financial service companies in developed countries, the Business Barometer respondents cited financial services companies as doing the most good for society, while financial inclusion initiatives by telecoms firms such as MTN and Airtel were also seen as having a positive impact. Many leaders mentioned brewing as a force for good, possibly because of the sheer number of jobs the industry creates.


The DRC is one of the largest African countries by land area. While the country is blessed with vast natural resources, a history of exploitive colonisation and civil war makes it one of the poorest countries in the world.


Ethiopia is second only to Nigeria in population terms in Africa. It has been the fastest-growing African economy over the past decade.


Tanzania with a population of 56 million has been growing fast over the past decade (GDP growth of about 6% to 7% a year).


Zambia is Africa’s second largest copper producer and has a strong services sector. However, it still struggles with high levels of poverty.

When asked to identify opportunities for growth, almost a third of Zambian leaders highlighted the shortage of management skills. Fewer Zambian firms appear to feel constrained by skills shortages at the most senior levels – just 38% versus 46%  across all five countries surveyed.

The report is available for download. Please register your interest and we will send you the online report shortly. 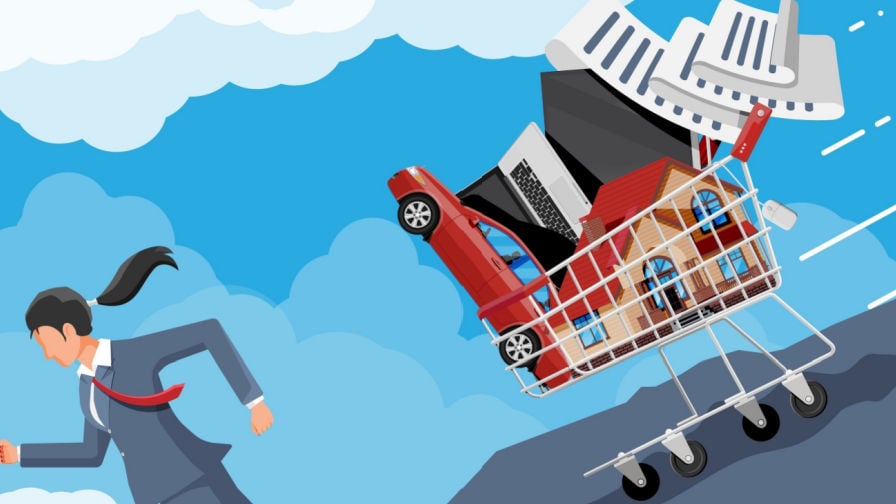 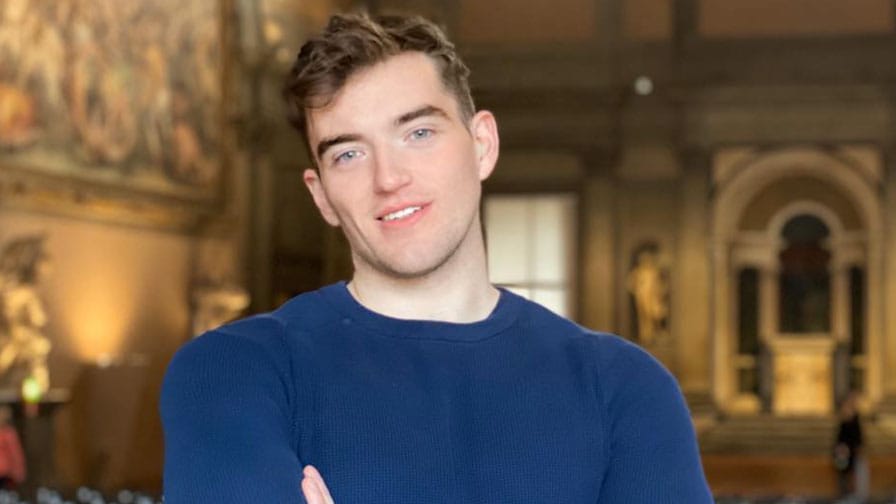