6 ways to sell your innovation

Find the right story to tell about your new product or service and you’ll generate curiosity, empathy and support

Julian Birkinshaw
Innovation
Save to my profile

Good storytelling is especially important when you are trying to get something new off the ground. Whether you’re a lone entrepreneur, R&D engineer, or middle manager with a bright idea, you need to differentiate yourself with a compelling narrative. The stories you tell about your idea and your efforts can generate curiosity, empathy and support. Hit the wrong note and you’ll meet with indifference, suspicion, even hostility.

Which stories will work on your audience and which will fall flat? Some important clues emerge from data collected through the London Business School Real Innovation Awards now in their third year. We now have a much clearer idea of which innovation stories attract the attention you want and which turn people off.
The process of innovation is inherently messy, but there are several recognisable stages along the way. Let’s look at each in turn. 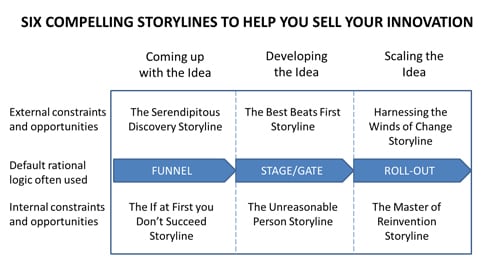 Coming up with the idea

The classic model of idea generation is a funnel – you collect thousands of raw ideas that people vote on to identify those worth pursuing. But you won’t get many followers by talking about funnels and filters. You need something more personal. Two storylines work well here.

Serendipity is a chance encounter – stumbling over something unusual and having the awareness to capitalise on it. Alexander Fleming, who discovered penicillin in his unwashed petridish, is the patron saint of serendipity.

Consider our award winner Jeffry Weers, a chemist working for Novartis in chronic pulmonary disease. Treatments traditionally used nebulisers or dry powder inhalers, neither of which worked particularly well because the particles frequently get stuck before reaching the lung. Weers, fortuitously, had a side interest in baseball. He knew that during practice a plastic porous ball is often used to slow movement down and allow a more curved trajectory. He applied this concept to drug development and, after experimenting for 20 years, successfully commercialised the “TOBI Podhaler”.

What makes this story attractive? The juxtaposition of seemingly independent things – pulmonary disease and baseball. This surprising connection then sets off a chain of events that culminate in a commercial opportunity.

So try to recall the original source of your business idea, the combination of ideas or the mental leap that got you started. And remember that serendipity is not the same as luck. Your story is either that you were smart enough to put yourself in a suitable place to see something unusual, or that you were wise enough to spot the potential when something surprising happened.

Here the inventor is hard-working and tenacious. Things don’t go to plan, but she keeps refining and adapting her idea. Eventually she succeeds. Think James Dyson and his 5127 prototypes. One winner in this category in our innovation awards was Paul Ostergaard. Back in 2001, Ostergaard launched Norwood Systems, a Bluetooth-enabled service linking mobile phones to the fixed-line network, which he was forced to sell in 2004. He did not give up, however, and in 2011 re-launched, this time taking advantage of smartphones and wifi. His first app flopped. But in 2015 he finally struck gold with World Phone, an app that has been downloaded more than 4.5 million times.
Such a story of struggle against external forces beyond their control or serial bad luck would not be out of place in a Hollywood movie. It is a framing that works for customers and investors too.

Note, though, that a story of perseverance needs to give the impression of progress. So don’t use terms like mistake or failure, or going round in circles; instead, talk about learning and experimentation and pivoting.

Second, you have to show that your perseverance has paid off. Our innovation awards originally included a “Before Its Time” category, for an unproven idea that was just too early for market. But it didn’t hit the right buttons – there were very few nominations, and those that got nominated felt like inventions that had lost their way. We eventually dropped the category altogether.

The classic managerial approach to idea development is known as the “stage-gate” process. As the name suggests, it breaks the programme down into separate stages, punctuated by decision points. But a storyline built on managerial process has zero emotional appeal. To bring it to life, the innovator needs a problem to overcome, or someone to prove wrong. By reframing idea development as a battle, you end up with two interesting storylines.

In this storyline, the innovator is fighting an unsympathetic system that is holding back progress. In the words of George Bernard Shaw, the innovator is the “unreasonable man” who wants to shift everyone else’s worldview (it goes without saying that the innovator is right and everyone else wrong). Think Steve Jobs and Elon Musk.
We had many nominations for this category – all of whom were happy to be labelled unreasonable, indeed, considered it a badge of honour.

One winner was Jane Chen, founder of Embrace Innovations, which makes infant incubators for developing countries. Jane and her team conceptualised the idea at Stanford University, with many years of design iterations and user testing before the 2011 launch. But the company nearly went bankrupt until Chen finally convinced Salesforce co-founder Marc Benioff to invest.

Everyone loves an underdog. We delight in their ability to knock down obstacles and to see them claim victory. And we take pleasure in seeing them prove others wrong. Unlike the if-at-first-you-don’t-succeed storyline, where the innovator adapts and pivots, the unreasonable person sticks doggedly to her vision and pursues it regardless of what others think.

To use this storyline, you need to emphasise how the unreasonable person’s view is pushing against conventional wisdom: what orthodoxy are they challenging? What vested interests is she taking on? And you have to show how – eventually, sometimes after many years – she has been proven right.

An alternative approach is to think of the company, rather than the individual, as the protagonist. Here, incumbent competitors are dominating a market with an acceptable product, but the innovator comes along with something better. The innovator wins through cunning rather than brute force.

We initially pitched this as the “Fast Follower award”. We knew that many successful companies were masters at moving quickly into markets that had been opened up by smaller companies. There were many nominees in this category, but they all refused to accept the nomination when we approached them. “We didn’t follow, we did something different,” was the standard response. We came to realise that no-one ever wins people over by talking about their capacity for imitation. Instead, their storyline is about doing things in a new way.

One winner of this award was Deliveroo, founded in London in 2013 by William Shu. To differentiate it from existing services, Shu decided to emphasise high-end restaurant food and speed. He built a network of drivers, improving efficiencies by constantly tweaking the core routing algorithm. Deliveroo now has more than 20,000 riders and has raised nearly $200 million.

Best beats first is about overcoming a challenge: vanquishing existing competitors by seeing an opportunity they missed. Make sure to emphasise the points of difference, and downplay the similarities, between your and the incumbent competitors’ offerings. It isn’t so important how you got there, but it is important to show what makes you distinctive.

The third part of the innovation process is about taking something with promise and scaling it up. Established firms simply leverage their existing resources to commercialise their new product around the world. But the global-roll-out story provides no emotional hook. A more exciting storyline, typically built around a journey, helps people to make sense of where you are going and what is expected of them. Here are the two that worked well in our innovation awards.

5. The “Harnessing the Winds of Change” storyline

The emphasis is on the external forces propelling you forward. You position your company at a unique point in history where several “winds of change” have come together to make your success almost inevitable. A classic example is YouTube, which capitalised on the emergence of simple video-editing technology and the roll-out of broadband internet access.

Or take BlaBlaCar, the world’s leading long-distance ridesharing platform. When French public-transport workers went on strike, BlaBlaCar was the go-to alternative for cash-strapped millennials. BlaBlaCar raised more than$300M between 2012 and 2015 to expand into new markets. The platform now has 30 million users in 22 countries, and is one of the few European “unicorns”.

This storyline gives a lot of credit to being in the right place at the right time. You position yourself as the expert surfer who catches the wave at exactly the right moment. “We were smart enough”, you tell your colleagues and investors, “to see how these trends were coming together, and this is what drove our success.”

Eventually, of course, the wave peters out on the shore and you fall off the board. So the storyline isn’t simply about harnessing the winds of change; it’s about being alert to how you’ll adapt when the trends cease.
Which brings us to the final storyline.

6. The “Master of Reinvention” storyline

Unlike most of the other storylines, in which the innovator takes on the establishment, this one is about the establishment challenging itself. It is the classic tale of transformation or rebirth, where the protagonist gets into trouble, goes through a near-death experience and reinvents himself as a better person. Think of Dickens’ A Christmas Carol, or a contemporary movie like Despicable Me.

This is a well-known storyline in the corporate world, often expressed in terms of agility or renewal. Originally, we called this category the “Eat Your Own lunch” award, because companies facing disruptive change often have to cannibalise their legacy products before their upstart competitors do. But the shortlisted nominees didn’t like this at all – they didn’t want to be known for aggressively killing off declining product lines. So we renamed it the “Master of Reinvention” category.

One winner was Ørsted (formerly DONG energy). Founded in the early 1970s by the Danish government, in 2006 the company boldly diversified from fossil fuel production into the electricity market. What followed was a remarkable transformation culminating in a leadership position in renewable energy.

So if your storyline is about transformation, don’t linger on the internal struggles you have gone through; focus on the reinvention story. People can relate to this; it suggests a company in touch with itself. Focus on the emergence of the butterfly, not the demise of the caterpillar.

Ignite and sustain innovation into your company's DNA and navigate disruption with our online course.