Women and men must work together to press for progress 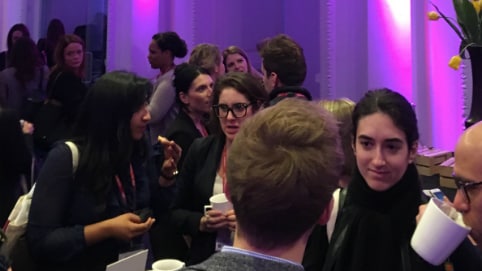 At the 18th Women in Business Conference, a 400-strong audience heard leading business minds discuss how women and men can collaborate for progress on gender issues.

Among them was Tricia Desnor, Group Director of ONO, a recent participant in LBS’s Senior Executive Programme. “Awareness is growing but we still have a long way to go,” she said. “Change will come but we can’t afford to take our eye off the ball.”

The theme of this year’s conference – organised by London Business School’s (LBS) Women in Business Club – was ‘Working Together: From Awareness to Results’. Twenty percent of this year’s attendees were male.

Co-president Samantha Kempe said: “Gender inequality is not a women’s issue, it’s a human rights issue. This year’s conference has moved us a step closer to our vision of a gender-equal workplace, something that requires a two-way collaboration. It’s testament to a strong will from both genders to work together to create solutions that will benefit everyone.”

“Today is an opportunity to shift your perspective, to see yourself and the world around you differently,” said François Ortalo-Magné, Dean at LBS. He announced that, out of nine new faculty members appointed so far to join the School in the next academic year, five are female.

Baroness Patience Wheatcroft, non-executive director of Fiat Chrysler and St James’s Place plc and former Editor in Chief of the Wall Street Journal Europe, said: “We must acknowledge the distance that still has to be travelled and think about how to do better.” Alluding to remarks by Kofi Annan, she said, “Gender equality is a precondition for changing the world. If you empower women, communities change for the better.”

Analysing the gender pay gap, which she called “a blunt instrument”, Baroness Wheatcroft said that women are earning less because not enough are in the top jobs. She challenged outdated business norms: “Instead of trying to crash through the glass ceiling we should change the whole structure of the building.”

Irina Bokova, former Director-General of UNESCO, said that women’s empowerment is a societal issue. “Gender equality is a moral imperative. Diversity also leads to stronger business results, so it makes sense on both levels.” She quoted the Canadian prime minister Justin Trudeau who, when asked why he is a feminist, replied, “Because it is the 21st century.”

Terri Duhon, Board Member at Morgan Stanley International and author of How the Trading Floor Really Works, interviewed Guy Grainger, EMEA CEO of the global real estate company JLL about leading from the top to effect change. “We’re not just doing this because it’s important, we’re doing it because it adds commercial value,” he said.

Eliot Sherman, Assistant Professor of Organisational Behaviour at LBS, moderated a panel looking at the part men need to play in building a more inclusive workplace. “Men need to start adopting behaviours that are antithetical to what got them to where they are professionally – leaving work early for the school run, saying no to travel assignments,” he suggested.

Ben Black, founder and MD of My Family Care, agreed. “We are never going to get equality in the boardroom until we get equality at home,” he said. “We need men at senior levels to be fully involved in the debate.” Chris Stylianou, COO of SKY UK and Ireland, said he was bored of having conversations about why achieving diversity is important. “It’s obvious! The companies that do it will win.”

Emma Roberts, Program Lead of Lean In Europe, chaired a panel about why diversity without inclusion is bad for business. She opened with a quote: “Diversity is being invited to the party; inclusion is being asked to dance.”

Amy Stanning, Head of Region for Home Solutions West at Barclays and co-chair of Spectrum, the Barclays LGBT Colleague network said that building a more inclusive workplace relied on men and women working together. “It has to be rooted in your values. You can’t lever it in – not if the culture is wrong.”

“It’s our ambition to grow the event into the preeminent women in business conference in Europe,” said Eileen Frino, Marketing Chair of the Conference Committee. “We took a big leap forward this year, both in terms of the scale of the conference and pushing the conversation towards action.”

This year’s conference was an official HeForShe London Arts week event. A pre-conference raffle, organised in partnership with the Women in Business Club’s Manbassadors team, raised £2,470 for UNWomen NC UK.

The conference was sponsored by BCG, Accenture, A.T. Kearney, GSK, Missbeez and Google.