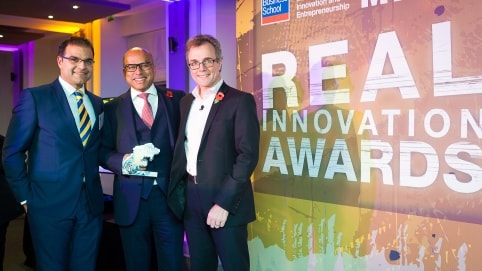 
In October of last year, global metals and industrial entrepreneur Sanjeev Gupta, who has conducted an audacious drive to reverse the fortunes of the UK steel sector over the past two years, was honoured as a ‘real innovator’ by London Business School.

In the 2017 LBS Real Innovation Awards, the founder and executive chairman of Liberty House Group and GFG Alliance was awarded the People's Choice George Bernard Shaw Unreasonable Person Award for his steadfast refusal to accept the conventional view that Britain’s metals industry was in terminal decline.

The prize acknowledged that Mr Gupta not only rescued and revived several major metals and engineering plants across the country (saving thousands of jobs), but has developed the ground-breaking GREENSTEEL business model to make the industry competitive and sustainable both through large scale domestic scrap recycling (powered by renewable energy) and through strategic integration of metals with downstream manufacturing.

Nominations for the 2018 Real Innovation Awards are now open and being accepted in each of the six prize categories. Judges want to hear about ideas and innovators who, like Mr Gupta, have pushed boundaries and defied expectations.

Speaking recently at a Cardiff Breakfast Club, Nirmal Chhabria, a director of Simec Group and Liberty House Group (businesses which come under Mr Gupta’s GFC Alliance), said the companies were making steelmaking “sexy and fashionable” again in the UK.

With the acquisition of the formerly mothballed Mir Steel steel mill in Newport in 2013, Liberty House Group is now looking to dramatically grow its production of recycled scrap steel in the UK, moving it up from one million tonnes to five million tonnes over the next five years.

Conventional wisdom has it that you can’t make money manufacturing steel in Europe because of cheap imports from China. Faced with losses of almost £1m a day, Tata Steel, the UK’s largest steel manufacturer, announced plans in 2016 to sell or close its operations. Into the breach stepped Sanjeev Gupta, a commodities trader turned industrialist, who had already made a name buying up unwanted industrial assets.

“We have done over 30 now … every one of them was a basket case or in some trouble, and they’re all producing positive results,” he says.

Mr Gupta bought a big chunk of Tata Steel’s UK operations as well as Rio Tinto’s Scottish aluminium smelter and several other plants. His company Liberty House had revenues of $6.7b and there are ambitious plans for further growth.

Mr Chhabria, a successful entrepreneur in his own right, takes up the story:

“The recycled scrap steel model, which unlike primary steel making doesn’t require the costly importation of raw materials such as iron ore and coking coal, had a viable long-term future, with Mr Gupta having the vision to enter a marketplace which people were exiting.”

With a waste-to-energy plant at Uskmouth in south Wales next to its Liberty Steel arc furnace steel operation and the former Caparo steel tube works at Tredegar, the group is committed to a three year £700m investment in a renewable power asset via its energy arm Simec, including a new windfarm in Scotland.

Mr Chhabria said that attracting investment into the numerous Liberty House ventures was not a challenge.

“If the project is right and the vision is right then the investors will come”.

However, attracting the right skills and talents into the industry remains difficult.

“People are not entering the steel sector as it is not fashionable and sexy. Experience like this is hard to find. You can teach the skills, but what you cannot teach and buy is the experience. But when do attract the right people they stay with us – we are one big family,” he says.

Writer and polemicist George Bernard Shaw said that progress depends on the unreasonable man (or woman) – the person who persists in shaping the world rather than letting it shape them. Each year, London Business School confers the George Bernard Shaw Unreasonable Person Award to an individual or individuals who have shown enormous tenacity and stubbornness in pursuing an idea, despite the difficulties encountered along the way.