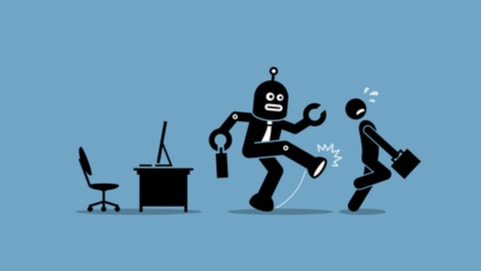 Millions of British workers with jobs that will likely become automated need to retrain or face being left behind, according to Lynda Gratton, Professor of Management Practice at London Business School.

A recent Sky News survey shows that roles in transportation, manufacturing, and retail and wholesale are most at risk from robots that will be capable of doing the same work. The threat of automation affects 18% of all jobs in the UK, with central and northern towns and cities particularly vulnerable, according to the study.

Professor Gratton believes workers and their employers need to start thinking now about retraining. “I would expect a clear narrative to emerge around the need for re-skilling. This will be taken up by some governments and some corporations,” she wrote in London Business School Review.

“There will also be a narrative emerging about those people employed in low-skill work. The government will need to ask how those from redundant low-skill jobs can be retrained to take on new roles where humans perform better than machines.

“Take for example the large numbers of redundant truck drivers replaced in the medium or long term by driverless cars. Will they segue into jobs requiring a real human touch? Will these truck drivers become hairdressers or restaurant waiters?”

Businesses must also afford their employees the time to develop new skills. “As we live longer and working lives are likely to extend, we will feel the impact of more and more disruptions from the adoption of artificial intelligence and robotics,” she said. “That means we need to allow time to learn more and learn flexibly over an entire working lifetime.”

The good news is that some companies are already taking steps to support their staff, according to Professor Gratton. “Insurance group Aviva has made this [the need to retrain] explicit to its 16,000 UK staff. It has presented them with a blunt question: could a robot do your job better than you? Those who answer yes aren’t then being handed their P45; instead, they will be retrained for a new role.”